A couple of months ago, someone I know, who is also a teacher, sent me a ‘joke’ to my WhatsApp account. It was in Hindi; I can’t read that language very well; I tried to read it and was able to decipher the letters, but did not ‘get’ the joke. Assuming it was because of my Hindi non-literacy, I forwarded it to my good friend and colleague Lina and asked her to explain what the joke was all about. She has studied Hindi right through her school days, and therefore, her language proficiency in Hindi was not an issue. She texted back a terse, “I too don’t’ understand: Sorry” reply.

The ‘joke’ if it can be called that, ran something like this. (Since I cannot reproduce it in Hindi, I am giving you a trans-creation in English.)

It was supposed to be a conversation between someone from India and Mark Zukerberg, who, as most of us know, started the social network site, Facebook.

This person ‘tells’ Zukerberg that he knows that there are many Indians working for Facebook and then supposedly asks:
“Mark, do you have any Pakistanis working for you?”
Zukerberg is supposed to reply:
“Yes of course” and then says: “Abdul, do chaai laao” (bring tea for two).

For the life of me, as I said, this ‘joke’ went above Lina’s and my head. I was flummoxed. My curiosity was however piqued so I therefore decided to write and ask the person who sent it to me to explain the ‘joke’. By the time the reply came back, the proverbial penny dropped: the crass joke hit me but I was quite happy that I had not understood the joke in the first place.

The person who sent it, with no qualms, sent me this reply:
“That’s all they are capable of!”

When I shared the ‘joke’ and what it was meant to be with Lina she said: “I’m glad, Geetha that I did not understand this initially. Bad taste.” My reply to the sender “don’t send such jokes to me ever again. In very bad taste, racial and biased” must have blistered its way through to her WhatsApp inbox, but that was not sufficient for me.

The two different responses, one from Lina and the other from the person who sent the joke in the first place got me thinking whether people are born with these differentiating values or whether they get inculcated at some point in our lives. 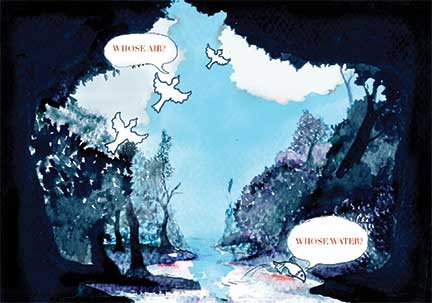 No human being is born into this world with an understanding of which nationality, religion, caste or gender he or she is born into. Such awareness and differences/divisions are part of socialization. It is unfortunately, also a part of education. At this point, with the awareness that Lina, the person who sent the joke, and I are all teachers, I began asking myself what we are teaching our children in schools and what we were taught earlier; and where such divisions among human beings springs from. I was disturbed and affected by this insensitive forwarding to all and sundry of a very crass joke.

Luckily for me, this narrative does not end here. Early December, Chennai was flooded and many people were marooned, stranded, left without any food to eat or water to drink. The same WhatsApp had quite a few stories of survival. The one that brought tears to my eyes was how Gurudwaras, mosques, churches, and temples were opened to people regardless of caste or creed, all those who needed help were looked after. There was even a very touching tale of how a Muslim had helped a Hindu lady give birth to a baby boy under these circumstances; in gratitude, they had written that the boy was going to be named Younus.

The ‘joke’ about Zukerberg is in very bad taste; it is not something that any of us should be sending to anyone. More importantly, those are not the attitudes we need to teach our children. If anything, stories of humans helping each other regardless of nationality, religion, caste or creed are the ones that ought to be making the rounds.

This reflection raised a few more queries in me.

We are talking about inclusive education today. Is inclusive only in terms of those with disabilities or those from a different community or gender? Can it stop there?

In partial response to these queries, I would like to share my experiences of watching the change of guard at Hussainiwala, in Ferozpur district, Punjab. The usual shouts and slogans happen and the ceremonial guard gets changed, but after that, most tourists go to see the memorials constructed for Bhagat Singh, Sukhdev, and Rajguru. This is on the banks of the Sutlej river. When we see the water flowing there, it is actually from one country to another; the birds that fly and animals that move around there, as in numerous other such places, are technically crossing territorial borders. But neither fish nor fowl nor beast knows this. The air and the water do not come with their nationality stamped on them at the point of entry. Countries do exist and borders and zones have to be maintained for very different reasons but we need to remember what Gandhi wrote way back in 1934 in Harijanbandhu: “Just as leaves of a tree, though different as leaves, are the same as the leaves of the same tree, all religions, though different, are the same. We must treat all religions as equals.”

National borders are barriers created by people. As teachers, more than anyone else, we need to teach our children not only to see people of all castes and religions from our own country as the same, but also those who belong to other nations. Borders are created by people but beyond these borders, all of us are human. If we, as teachers, do not believe this, we cannot teach such beliefs to our students. We will continue teaching our students that there are some who are like us and others who are different. They too, in turn will continue to believe that ‘they are not like us: they are different”. The ‘they’ could be anyone, a person from a different caste, community, gender, country, or place. We are all different, but we are all the same: We are human.