Education was a major concern of J. Krishnamurti, a radical thinker and educator. For him, the development of the total individual was important, rather than only knowledge and skills. 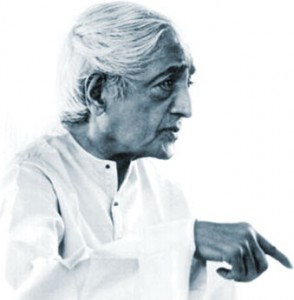 J Krishnamurti is now considered to be one of the most radical thinkers and educators of recent times. Travelling the world over for a period of more than six decades, he pointed out the urgent need for a transformation of the psyche, without which the survival of humanity would be threatened. This transformation included a deep inquiry into the nature of the self.

Education, a central concern of his, is an integral part of such an inquiry. He held wide-ranging talks and discussions with thinkers, teachers and students on the significance of right education. In a world in which true morality seemed to be fast disappearing, it was of vital importance to him that educators and young minds engage with questions that were fundamental to the human psyche – the nature of fear, prejudice and violence. Educators and teachers were challenged to respond to these questions not just intellectually, but with the whole of their attention.

Educators everywhere would probably agree that one of the aims of education is to bring about an intelligent mind. However, the term ‘intelligence’ is usually synonymous with competence or excellence in a particular field – be it science, medicine, engineering or mathematics. Students in educational institutes, both school and university, are trained for extended periods of time to achieve competence or excellence in a particular field. The term ‘intelligence’ is hardly if ever applied to dealing with life, with the problems of society, or the problems of the individual. Krishnamurti made a distinction between intelligence, and the cultivation of knowledge and skills. The development of knowledge and skills helps an individual function in society. However, the development of the total individual – who thinks sanely, objectively, who is sensitive to the problems of life – the emotional, intellectual and psychological problems, has not been a central concern of education. (Life Ahead; p.10; Krishnamurti on Education, p.29)

The total development of the individual student is possible only if she can be helped to know her own deep capacities. Comparing one student with another does not bring about knowledge of the deeper capacities of the child. Comparison and competition have generally been seen as stimuli to learning, but they only breed envy, insecurity and fear. As most parents would like their children to have successful careers, this method has been used without the need to find out what the student’s deeper interests are.

“The child’s natural curiosity, the urge to learn exists from the very beginning, and surely this should be intelligently encouraged continually, so that it remains vital and without distortion, and this will gradually lead him to the study of a variety of subjects. If this eagerness to learn is encouraged in the child at all times, then his study of mathematics, geography, history, science or any other subject will not be a problem to the child or the educator. Learning is facilitated when there is an atmosphere of happy affection and thoughtful care.” (Life Ahead, p.12)

How should the teacher help a student be very sensitive? In his talks and writings to students, Krishnamurti often drew their attention to listening, looking and observation, especially while in themidst of natural surroundings. Listening very attentively to the song of the bird, looking at its shape and colour, completely, without the intrusion of thoughts and feelings; looking at the flow of the river without wanting to do anything about it, brings about freedom of observation. Consider a classroom situation, in which children are instructed to learn from books. Traditionally, a child is instructed to concentrate on her lesson; otherwise, there is no learning. However, if the child’s gaze moves to a lizard on the wall, her gaze could be allowed to rest there as she perhaps watches the shape, colour and movements of the lizard with an intensity of interest that the book cannot evoke.

Freedom, however, does not mean doing what one likes. “If you say ‘I will do what I like. I will turn up for my meals when I like; I will come to the class when I like…’ – you create disorder.” (K on Education, p.38) Taking others into consideration, being polite, and concerned about other people, is all part of order, which brings about freedom.

While this order is relatively easy for an alert young mind to grasp, Krishnamurti was concerned that the older child was increasingly drawn into a world very similar to that of the adult. This, he said, is primarily because of the process of image making that the young mind begins to get caught up in. He saw this as destructive of the child and his creativity. The child has images about himself, which grow increasingly stronger, and there is a preoccupation with oneself – what others think, what one is capable of, and so on. The image is thus a source of enriching oneself, or on comparison with others, proves to be frustrating. These images create conflict, and therefore dull the mind. (K on Education)

These questions are a small sample of the vast number of talks, dialogues and discussions that Krishnamurti held with educators, teachers and students. While he never denied the need for developing a sharp, clear and critical mind, he saw the central concern of education as the development of the whole human being, capable of looking at his own problems, and that of society and the world, with clarity and sensitivity.

Deepa Onkar has been a teacher at CFL, Bangalore, and is an editor based in Chennai. She can be reached at [email protected]