At school, we wore pinafores. It was a girls’ school; the pinafores had a particular length, certainly below the knees, a collared white shirt underneath and a coloured cloth belt to be worn neatly around the waist, not tight but definitely not loose and sluggish. Though the pinafore was identical for all students, the belt had four different colours, separating each class into four different groups or “houses”.

No one ever wondered why we were wearing a ‘uniform’ that was supposed to inculcate a sense of identity in students, that was meant to diminish feelings of social-economical barriers between children; but was also creating differences in the class and also in the school by creating “houses” so that children could compete with each other academically, at sports or in extra-curricular activities.

No one ever asked if the uniform was in fact creating a sense of school identity, developing ambassadorship, distinguishing students of one school from another, trying to “preserve school unity and team spirit”. Or was it, as often happens with patriotism and national identity, only creating differences amongst people as a whole. 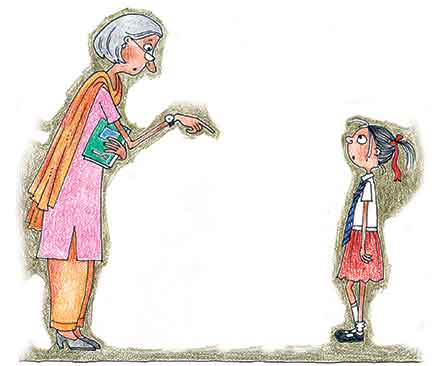 No one ever thought of the fact that by looking at the uniform, people would know which school one is from, and in the process, also somehow judge the school through one’s demeanour, make sweeping comments about students and school culture. This would result in the enforcing of strong discipline to shape the school culture in a manner that would receive approval from the world at large, as students are representatives of the school’s image. The result was that teachers would spend more time policing clothing and hairstyle violations rather than looking at the children just as they are – individuals with individuality.

And of course, no one ever checked up the concept of the pinafore – the etymology of the word, the history of what a pinafore represented.

In recent times, serious questions regarding the need to have a uniform have been raised. This could be a result of the fact that perhaps the world is no more ‘uniform’, homogenous, orderly, unchanging, or undiversified. There have also been cases where schools which did not have uniforms earlier have adopted the policy of compulsory uniforms to systematize, unify, and mellow the glaring differences.

Since uniforms are part of an education policy, we could ask if they are really preparing children for the ‘real world’ by creating a sense of homogeneity. The uniform itself, in many Indian schools is straight from the colonial times, corresponding with the style and manner of a time the present knows nothing of. We could also inquire into the academic value of the uniform – does it have any effect at all, especially a “positive” effect on academic achievement because the children no longer focus on fashion and what is “in”? Studies have suggested that there is no relationship between academic achievement and school uniform and that perhaps the absence of uniform or focus on dress code could actually lead to pro-school attitudes and better grades.

It is believed that usually the uniform leaves minimum space for signalling economical status. Owing to increasing peer pressure, students nowadays are likely to assess each other by clothes and appearances. However the uniform could create a spurious sense of superficial harmony in the school. To erase differences by merely shrouding them is not enough. One needs to embrace differences, not ignore them.

Today, in a fractured world rife with issues of identity crisis and difference; a world which is breaking down because of notions of the self and the other; it is significant that one carefully examines differences before obliterating their subtlety, their relevance or the implications they might have in the future. Though the myth behind the uniform suggests that it is a “leveller” or an “equaliser”, the blanket of the uniform that covers the individual from a very young age, does not allow her/him to understand what lies beneath.

To come to an understanding of the point of origin, the root of the difference would be far more effective than merely assuming or pretending to believe that there are no differences at all.

The present turbulent times enforce the need to have a widely encompassing approach towards the world and its beliefs but at the same time it is extremely relevant to look at every single individual at the micro-level. Homogeneity goes against individualism but at the same time, it also gives a certain lift to the majority, unconsciously erasing the significant differences of the minority. 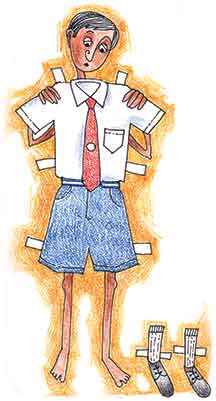 Children need to be made aware of the differences so that they can respect them and not stay blinkered assuming that every one is the same. When differences work at a subtle level, in snide remarks, in subverted attitudes, they are far more dangerous than when one confronts or understands them directly. If the uniform can instil a sense of oneness and resolve the class issue, as it is supposed to, it would certainly have done so by now.

The school where I now teach does not have school uniforms. The basic tenet however is that the children wear clothes that are not branded, that do not depict the prerogative of a particular brand or class, that do not have “text messages” which could be an expression of an attitude, ideology, or stand. Despite the simplicity of the norm, we continue to have student council debates over the norm that printed message t-shirts are not allowed. What messages are appropriate and what could be considered objectionable is interrogated. Questions are asked as to why promoting environmental consciousness through messages on t-shirts is considered to be problematic. Children wonder if the “no-uniform” policy which offers them choicer and wider boundaries is even being followed when we proscribe certain other kinds of attire.

However, far beyond the ‘burning questions’ which seem to be very real and very close for these children is that, they de facto have the possibility to ask these questions. The freedom that comes with a no-uniform policy is not just sartorial or physical; it becomes a part of the mind and the philosophy.

There are increasing gender, class, and race divides among people apparent even in schools. However countering social inequality with social control, using the concept of uniformity as a norm, does not necessarily erase these divisions. The absence of uniform sometimes brings a daily benefit, and liberates the teachers from having to discuss insignificant matters about pupils’ clothing. There certainly are more crucial issues, looking at our fragmented and complex world, that need to be part of the conversation between teachers and children. An atmosphere of mutual respect and commonly shared aims and ideas can be engendered by a sharing of perspectives rather than external controls.

The fact that the possibility to question, introspect, and change exists in certain schools could be the first step in making a difference at a wider and larger level. As a 16 year-old girl says, “Uniforms were first introduced in the time of Henry VIII with blue coats; education used to be about learning facts and never questioning them. I think today our education system has a lot more creative values, and not having a uniform reflects that.”

The author currently teaches at Sahayadri School, KFI. She has been teaching English Language and Literature for the past 15 years to students of various ages and nationalities. She can be reached at [email protected].