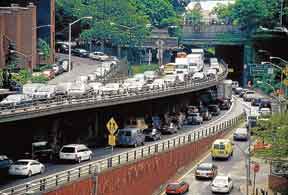 Developments in transportation are among the most impressive achievements of mankind. Man who couldn’t move much faster than about 4 km/hr (kilometers per Hour) on foot was able to increase this on a bicycle and the horse cart (to about 20 to 30 km/hour). The invention and availability of the automobile made it possible for humans to cover anything between 60 to 100 km/hr and well over that on motorways. If you take a train, this speed can rise to 80 to 100 km/hr. For the purpose of this article, we will ignore air travel.

Since post -World War II, man has pursued faster modes of travel through machine-driven vehicles. However, these vehicles are also creating many problems for the world. As one can see, the growing number of auto vehicles has pushed our cities to build more roads, widen the older ones, and to build flyovers. But even after this, vehicle congestion (what we call traffic jams) continues to get worse year after year.

Most of us can remember the days when traffic was not so bad. One could travel from one end of the city to the other in reasonable time and for shorter distances one could even walk or cycle quite safely. But during the past few decades our cities have been taken over by automobiles. There are so many fast moving vehicles occupying every inch of the road that for pedestrians even just crossing a road is an ordeal.

Conventional thinking suggests that a solution to congestion is to widen roads, build more roads and even build flyovers (road over road) to meet the growing number of cars, scooters, and motorbikes. Most of our cities have followed this path with gusto, with the result that road making and road repairs now account for a major portion of the municipal corporation’s budget. In Pune, the amount budgeted on transport (road making and road repairs) exceeds the amount for health, sanitation and slum redevelopment put together. Despite such heavy expenditure, traffic problems haven’t reduced. In fact, they have worsened. The situation is not much different in other cities, including the ones touted as Silicon Valleys of India (Bangalore, Hyderabad, Pune etc).

The author is a Graphic Designer and Printer by Profession. He is also founder member and Trustee of Parisar, an NGO working for environmental awareness, education and action. During the last fifteen years Parisar has increasingly been focusing on Sustainable Urban Transportation as the conventional Traffic and Transport Policy has been damaging the urban environment in most of our cities. He can be reached at [email protected].