Radha saw Mrs. Sharma through the open door, walking briskly down the corridor, heading towards the Staff Room. Deciding that she couldn’t avoid her, Radha quickly pulled out the unit test papers she’d planned to correct in the quiet of her home, and began to read through them as carefully as she could, for she knew there was soon going to be unrest in the room.

Mrs. Sharma breezed in, a cloud of her trademark perfume filling the air and making Radha sneeze. She looked around her, asking rather imperiously, “Where’s Srinu?” When no one answered, she carried on, “Well, if he’s not here at the time I gave him, I’ll just have to go ahead without him. Suman and Radha, I need your reports on the Science Exhibition preparations.” 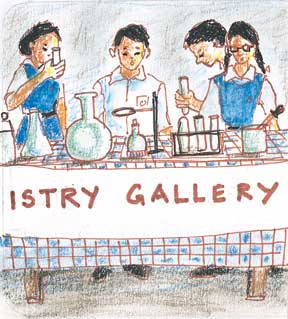 Radha exchanged a wry glance with Suman Nath, the junior school science teacher. Neither of them spoke.

They had decided only this morning with Mr. Srinivas, the Physics teacher, that there were four of them on the science committee and no one had appointed Mrs. Sharma, the Chemistry teacher, as the spokesperson or coordinator or leader, so she would just have to sit down with them and decide jointly how to go about the preparations, or manage the projects she’d set for her classes on her own and not worry if anything overlapped and caused confusion.

Radha continued to study her papers as if she hadn’t heard. Suman, who was bolder, stood up, picked up her books, and walked to the door. “Mr. Srinivas has extra classes all week,” she said. “He’s only free on Saturday morning, when the three of us will be meeting. You’re welcome to join us.” And out she went.

Radha almost burst out laughing at the look on Mrs. Sharma’s face. None of the staff members had ever talked back to her – she’d been with the school from the time it was started 13 years ago, and she constantly reminded everyone that she’s seen four Principals come and go. The English teachers had nicknamed her ‘The Brook’ and in her absence proclaimed, ‘For Principals may come and Principals may go, but she goes on for ever.”

Saturday morning came and Srinu, Radha and Suman sat over their mid-morning tea and chalked out what they would ask the students to do in each subject – not too much, not too little. Just enough to make sure thechildren enjoyed their projects and the exhibition had some originality. “We’ll let them concentrate on certain chapters only,” Srinu suggested. “Usually, they just take old projects from seniors and re-do them. They don’t want to think for themselves.”

“But we won’t know if the projects have already been done, will we?” said Radha. “The three of us haven’t been here long enough, remember?”

Suman looked behind her. “Well, Mrs. Sharma could have helped with that, but she hasn’t come in – and I saw her in the lab a little while ago, without a class.”

Srinu, the newest of the three of them, added, “I mentioned to her that I was on my way to the meeting, but she said she was busy.”

“She’s deliberately staying away because she didn’t like the idea of anyone else deciding the time and place,” said Suman uncharitably.

Srinu looked worried, and Radha wondered aloud if they could manage without her, but Suman was confident.

“Look, the last time I worked with her on this, I was the general dogsbody. I’m not goingthrough that again. The three of us can co-ordinate well enough without any ego clashes, so let’s just set the tasks in our subjects, get enough to make the exhibition worthwhile, and leave the chemistry projects to her,” she said. 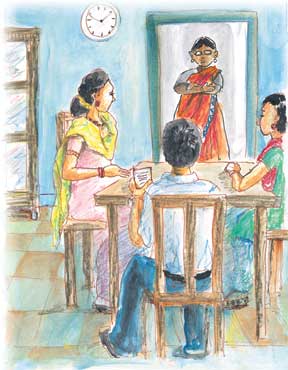 A week later, Radha entered the Staff Room absent-mindedly and found Mrs. Sharma there, a diagram in front of her, a thunderous look on her face. Radha couldn’t move. She didn’t know whether to stay now that she was already inside or leave and hope Mrs. Sharma wouldn’t notice. The decision was taken out of her hands.

Mrs. Sharma looked up and declared. “There you are! Just come here and take a look at this chart. Now, you know I need at least six more students from each class and all of them say that they are already involved in some science project or the other. How did that happen?”

“Who decided? Nobody asked me about any decisions!”

“Actually… the three of us…”

“The three of who? I’ve handled this exhibition from the time the school came into existence and I know exactly what’s what. Clear everything with me before doing it and before telling the students… got it?”

Radha was too stunned to say anything. She stood there fish-mouthed while Mrs. Sharma picked up her papers and left the Staff Room.

She then sat down and went over the conversation in her mind, coming up with biting repartees, but knowing that she’d never have the courage to stand up to the sheer force of Mrs. Sharma’s personality.

“What if we make a mess of it?” she asked Srinu later in the corridor on her way to a class. “Maybe we should just go to her and ask her to meet us.”

Srinu, already with a couple of projects ready, had acquired more courage than Radha had expected. “No need,” he said breezily. “The kids are enthusiastic and are doing a good job, that’s all that matters. If we chop and change now, we will only create more confusion.”

Suman had another solution. “Okay, we’ll give her a chance,” she said. “You never know what tales she’ll carry to the Principal about us.”

Quickly, she took a marker and wrote a one-page notice and pinned it on the Staff Room reminder board. “Science Exhibition coordination meetings on Wednesday and Saturday, 10.00-10.30 a.m.”

“There, now she knows – we have our proof that it was all official. If she doesn’t come, she’s the one who’s in the wrong.”

Suman laughed. “You should be the least worried. Biology always has the best projects on display. There’s so much the students can do with it. Whereas my juniors have to be helped every step of the way, or else they just bring in something their parents have done, and they parrot everything when questioned about it!”

The day of the exhibition loomed near. While Radha, Suman and Srinu looked anxious and fluttered here and there arranging for tables and tablecloths and other trifles, Mrs. Sharma could be heard from one end of the corridor to the other, directing the prefects and a few of her favourite students, making sure she got all that she wanted done.

“How does she do it?” muttered Radha, wishing she could take a leaf out of Mrs. Sharma’s book.

“She has the students on their toes,” mused Suman. “We’re trying to do too much ourselves. Even the last time, when I was running around madly, I didn’t make it all the responsibility of the students. They’re kids, not post-grad students!”

“But they could get some more duties,” suggested Srinu, getting out a piece of paper. “Let’s see….” In his methodical way, he began to write and soon they had made a list of things for the students to undertake. “Reception, boards, guides….”

The students were thrilled with the additional roles offered to them. Now even those who hadn’t done anything for the exhibition were clued up about the different projects, practising aloud what they would say or pretending they were greeting parents or leading them out for tea.

When at last it was all over, with no major hitches, and no embarrassing moments for the students or teachers, the three teachers heaved a collective sigh of relief.

“I think ours was a good blend of doing and getting done,” said Suman, thinking of the frazzled looks she’d seen on so many young faces in the Chemistry ‘gallery.’ “Just goes to show that three heads are better than one!”

Srinu laughed. “Four heads,” he said. “You’ve forgotten that we had an absent teacher and we were learning – at a distance, no doubt, and both ‘how to’ and ‘how not to’ – from the master!”