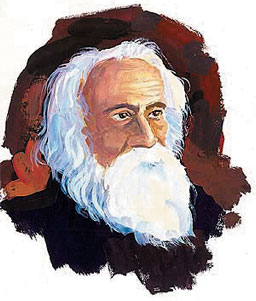 There is the belief that education means scientific, technological or industrial training. But if the world of education is to experience a flowering in which a variety of sensibilities – artistic, scientific, and poetic – are to flourish, what Tagore called the dreary desert sand of dead habit, has to be crossed.

Almost all accounts that I have heard or read about Santiniketan by old students, contain anecdotes of some unique and intriguing aspect of the place. Old girls and boys reminisce knowingly of the closeness to nature they experienced as children, or the vivid colourfulness of the festivals of dance, drama, art and craft, or the benefits of outdoor classes that were so pleasant.1 The thread that runs through all these narratives is the fact that long after they have left school, memories of Santiniketan remain with these individuals, continue to influence their ways of thinking, and has much to do with what they choose to do in life.

The uniqueness that the students ascribe to the place is perhaps to do with the way Santiniketan was started, and the course of events that led to its inception. Tagore, in his talks with students, says that when he was quite young, he ran away from school. The step, he says, saved him – ‘all that hung by a thread until then’ – the tenuous relationship with books; the chore of sitting still in the classroom, was now abandoned. Tagore had always had the ‘gift of poesy’; every morning, when he was a child, he would “…run out from his bed in a hurry to greet the first pink flush of the dawn through the trembling leaves of the coconut trees which stood in a line along garden boundary, while the grass glistened as the dewdrops caught the first tremor of the morning breeze… all my heart, my whole body in fact, used to drink in the overflowing light and peace of those silent hours.”2

The blue skies, the seasonal flowers, and a heightened ability to empathise became actualities that commanded him to do what he most cherished; write poetry.3 He says – “You may call me uneducated and uncultured, just a foolish poet; you may become great scholars and philosophers, yet I think I would still retain the right to laugh at pedantic scholarship.”4

These are telling words and actions. Boredom, a feeling of restriction within the walls of a classroom, the earth and the skies only glimpsed through the windows, and made contact with during intervals between classes, are the plight of millions of children across the country today. Poetry is laughed at in today’s educational programmes – why wouldn’t it be when the pursuit of competitive excellence in the sciences is given prime importance? Scientific excellence should definitely be striven for, if after careful consideration, the student thinks that it is indeed the subject she would like to specialise in. But a culture in which the exclusive pursuit of science and technical subjects is encouraged by schools and parents is pervasive in the country today. While there is a profusion of courses offering other options, scientific, numerical, analytical ability is still considered, by a large majority, to be an indication of worthiness, intelligence and success in life.

Tagore saw in the rationality of science an opportunity to free the minds of the majority of his countrymen from superstitiousness. He held conversations with Einstein on the importance of the observer in science, rather than an independent, absolute truth. Tagore’s view was that neither complete objectivity nor the perception of beauty was possible without an observer.5 Poetry, it wouldappear then, is not too far away from science. Taking a cue from conversations of this kind, it is interesting to ask if scientific study in our country (at the school level at least) could be accompanied by a study of the processes of science. Science at the senior secondary level at least, instead of becoming a series of formulae to be derived from principles, could be taught in such a way that the student gets a glimpse of the aims of science – the search for beauty and order through rigorous methods of observation and calculation; the involvement of the senses in scientific observation and experiment; and finally, of science itself as one among many ways of looking at the world.

When Tagore was 40, he started Santiniketan (in 1901). He did not set out to experiment with education, nor was it an attempt at bringing about a progressive school focused on innovative ways of teaching and learning. Over the years as he studied, wrote novels, plays and short stories, and composed songs and poetry, a school grew. Tagore’s artistic personality became the centre of all the activities of the school. As soon as a song for Gitanjali was composed, children would sing it. Seasonal festivals were arranged, and lyrical dramas composed for the season. Artists and singers were invited to live at the school, so that children could be inspired. Opportunities were created so that artistic talent could be expressed, and only when a strong inclination or love for a particular activity was shown, was formal training arranged for.6

Thus, if talent in a subject (other than science) is to flower, patient and consistent observation of a child’s inclinations should first be established. This may not be possible in most schools, as music and art are not given enough space and time – a period a week for each. The child whose learning patterns are artistic, musical or largely sensory is, then, by the age of five or six already in a position where shehas to spend the majority of her day with activities which she is not especially inclined towards–numerical activity, linguistic skills, elementary analytical ability and so on. Also, artistic talent is usually ‘spotted’ through festivals that are competitive in nature. These festivals could remove their competitive aspect, and all students (not only those chosen by teachers) present what they have worked on during their art and music classes. Teachers will not find it difficult to identify children whose learning patterns are predominantly musical, artistic, dramatic (which involves a number of skills and intelligences) and so on. ‘Parent’s day’ could become a day-long festival of drama, dance, art and music in which all children participate.

There is a mantra in the minds of students, parents and teachers in our country, and perhaps the world over–that education means scientific, technological or industrial training. But if the world of education is to experience a flowering in which a variety of sensibilities – artistic, scientific, and poetic – are to flourish, what Tagore called the dreary desert sand of dead habit, has to be crossed. Perhaps teachers, parents and students need to embrace Tagore’s attitude, expressed in what is perhaps the best-known poem from Gitanjali:7

Where the mind is without fear
and the head is held high;
Where knowledge is free;
Where the world has not been
broken up into fragments
by narrow domestic walls; …
Where the clear stream of reason
has not lost its way into the
dreary desert sand of dead habit; …
Into that heaven of freedom,
my Father, let my country awake

Notes and References
1 See Sen, Amartya. The Argumentative Indian: Writings on Indian History, Culture and Identity. ‘Tagore and his India’ (New York, Allen Lane Penguin:2005):115. The chapter on Tagore gives a comprehensive account of his views and attitudes on a variety of subjects – the West, Patriotism, his relationship with Gandhi, his views on education and so on.
2 Ed. Soares, Anthony. Lectures and Addresses by Rabindranath Tagore: Selected from the Speeches of the Poet. ‘My Life’ (London, Macmillan:1955):13.
3 Anna Akhmatova’s poem. ‘The Muse’ describes the poet’s awed attitude when she encounters her muse.
“All that I am hangs by a thread tonight
as I wait for her whom no one can command.
Whatever I cherish most – youth, freedom, glory –
Fades before her who bears the flute in her hand.”
Tagore’s inspiration is, however got from a source different from the personalised, mythological muse that Akhmatova describes – he found his in the natural beauty of his surroundings; his poetry too is filled with a sense of wonder and awe in the variety of forms, colours, sounds and fragrances in nature.
Ed. Paine, Jeffery. The Poetry of our World: An International Anthology of Contemporary Poetry. “The Muse” Anna Akhmatova (New York, Perneial Harper Collins: 2000):224.
4 Ed. Chakravarty, Amiya. A Tagore Reader. “From Talks to Students in China” (Boston, Macmilllan:1961):207.
5 Sen, 2005:104.
6 See Soares, 1955, the chapter entitled ‘My School’:37-39.
7 Tagore, Rabindranath. Gitanjali. Online Publication <<http.extext.lib.virginia.edu>>