Yoga – this word tends to conjure up images of people in various kinds of difficult poses, doesn’t it? Especially with International Day of Yoga (IDY) around the corner. Since 2015, IDY has been celebrated around the world on June 21. People participate in spectacular displays in locales that range from public parks to parliaments. One of the youngsters on the block in terms of having a day marked out for itself on the calendar, yoga is an ancient discipline – some call it a philosophy – that’s been rediscovered and adopted by many across the world. Its perception has changed from that of a religious, specifically Hindu system, to that of an activity that has significance and value for all humanity, and it has much to contribute in the learning arena. While yoga has been part of institutions like the Maharishi Vidyapeeth, Sri Sri Ravishankar Vidya Mandirs and Swaminarayan Gurukuls since their inception, it has become a part of the Physical Education curriculum in many schools today. What makes it so significant? This article highlights some of its benefits.

Yoga is thought to be one of the best ways to get bodies and brains to function effectively together. The word itself springs from the Sanskrit root ‘yuj,’ meaning ‘union,’ and signifies the union of the body and the consciousness. Practitioners attest to its efficacy in bringing wellbeing on all planes, mental, physical, emotional and spiritual. Children and youngsters stand to benefit much if yoga were to be a part of the curriculum in schools.

Developing awareness and concentration
Physical education sessions, at least in India, are often limited to rigorous PT exercises or sports involving gross motor skills. The focus, in the former, is usually on completing a given routine, and in the latter, on developing skill at a few sports and competing with others at it. With yoga, the focus is not as much on routines and skills as on recognizing and expanding the individual body’s suppleness.

Movements in yoga are fluid rather than sudden, and are coordinated with the breath. Observation, discernment and extension of the breath is the first step in yoga: the slow, deep yogic breath is something every next step in yoga is predicated on. When the mind is called upon to attend to the breathing pattern and slow the breath down, one can keenly perceive the attendant relaxation produced in the body. This develops an awareness of the connect between the body and the mind. The deliberate stretching of muscles in coordination with breathing patterns instead of against them, along with the insistence upon only ‘doing as much as you can’ favours cooperation between one’s own body and mind over competition with others. Learning to ‘do’ yoga thus helps develop concentration, and as a valuable side effect, it may also deflate one’s ego.

Improving focus and flexibility
Yoga brings clarity with respect to the limitations of one’s own body. Even the simplest yogasanas can cause a stirring of barely used muscles, as they involve stretching, bending, twisting and turning as well as staying still. In some yoga routines like the Suryanamaskar, over 90% of the muscular system is exercised. Yoga poses reinvigorate the body, bring agility, and increase stamina.

One great thing about yoga is that it demands engagement rather than proficiency: dedicated practice rather than mastery is the requirement. It obliges one to focus on one’s own effort, and to stretch just that little bit in order to increase one’s capacity. The benefit is improved flexibility as well as an unanticipated intimacy with the workings of one’s body. For instance, it can make one think about abdominal exercises not only a means to strengthen the muscles and develop abs, but as an aid to digestion too. There may even be a shift in perspective: for the body comes alive as a biological mechanism within which the consciousness is housed, and one’s attitude towards it may become more respectful. 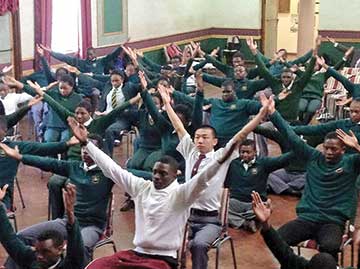 Good health, stress relief and more
While muscular flexibility itself can be considered an aspect of improved health, yoga goes beyond this by enjoining us to maintain personal hygiene. The conscious engagement with the mind-body complex assists as well as promotes good health, helping us keep ourselves clean and healthy inside and out. Just as maintaining personal hygiene brings a sense of wellbeing, conscious breathing calms the mind, and decreases anxiety and stress, while strengthening resilience to negative thoughts and emotions. Specific asanas also help build immunity, leading to an increased resistance to disease.

The practice of resting the body at the end of a routine enables the body to integrate and absorb all that has been learned, and brings home the complementary nature of exercise and relaxation. This quiet time has a contemplative element, and can actually lead into meditation.

Mala Sundaresan, coach for under-19 women’s team of the Karnataka State Cricket Association, shares how yoga and meditation have helped her: “I have played cricket for India. All through my training when I was young, everyone around me had this expectation that I should play for India. But no one taught me what would happen on the day I was dropped. As with most individuals, I was devastated. Only yoga and meditation gave me the strength to overcome that.”

Now the Director of Children and Teens Programs of the Art of Living, she stresses that apart from making for a much fitter body, yoga calms and clears the mind, and brings confidence and openness to possibilities. Yoga hones the innate intuitive ability that children are born with, and gives them a much-needed inner perspective that enables them to find a balance in contemporary times. Making yoga and meditation a part of the curriculum will help children become emotionally mature and understand life in a bigger perspective, she feels. Having worked with thousands of children, she emphasizes that in contemporary times, when children and teens may face situations that parents or teachers might not even be aware of, or that might be harmful to them, yoga helps them to understand intuitively what is right for them and gives them the conviction to say ‘no’.

Yoga’s therapeutic effects have been noted even in the west, and many schools include it in their curriculum as an effective way of reducing stress, easing depression and addressing cognitive decline. They find that yoga can lower children’s stress levels and support healthy relationships, as well as help them stand up for themselves, develop resilience in tough situations both in school and outside, foster creativity and even support academic success. The advantages of getting children to adopt and practice yoga are tremendous: the tagline of Yoga Ed., an organization that develops and implements yoga curricula for schools in the US, sums it up as “empowering the next generation with mindfulness, movement, and social emotional learning.”*

Note: The Art of Living engages with schools across India. They can be reached at [email protected].

The author is writer, editor and researcher. She can be reached at [email protected].