It was too hot and sunny a day for him to be doing business. He dragged his rickshaw-cart with the hope of turning all that pedalling into a decent livelihood. There was hope for people who worked hard and never gave up, and Girdhar always strived to be among those few who liked to believe that some day, by an invisible trick of magic, all the hard work would materialise as freshly minted coins.

He took his daughter along with him to work on Sundays. She would sit in the cart of the rickshaw and bump along the roads. Today, she was visiting a new area of Hyderabad. It was in the outskirts, a certain Shivam Nagar where the surroundings were lush green and there was a disturbing quiet that unnerved her.

As her father pedalled along the bad roads of the locality, little Nandini – all of eight – watched keenly at the absence of people outside. She wondered about the inner rooms of their homes as all the transactions were carried out in the verandah on the outside. All she ever had was a cursory glimpse. She noticed a corridor of cool darkness in most houses. That’s all she had by way of record of her numerous visits to houses her father had taken her to.

Girdhar bought scrap from households and sold it at a twenty per cent margin to scrap dealers. He had managed a living with enough to provide for a family of three. Today, he hoped to do good business so that he could take them to the local fair in the evening.

“Nandini, get down and let’s go knock on that door,” he said to his petite daughter who was dressed in a murky pink frock with laces around it. She jumped off the cart and together they opened the bulky iron gate and entered the premises of a house. The gate made a churning noise as it was opened and shut. They pawed along the path leading to the door.

On ringing the bell, the door opened after what seemed like a few minutes. A lady dressed in a light green cotton sari appeared from behind the partially-opened door.

“Madam, I… scrap… raddi wallah…” Girdhar fumbled for words but before he could finish, Nandini spoke up, “Do you have old newspapers, magazines and bottles to sell?” She had just joined the local school that had been organised by a social worker in their area. 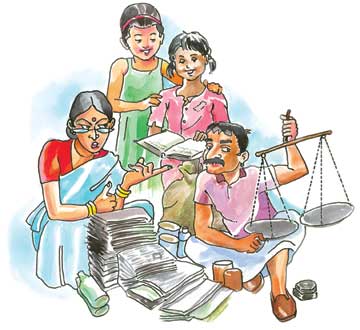 At this, the lady frowned and then smiled and motioned them to stay before going inside. She came out in a couple of minutes and asked them to sit. They sat down on the floor in the cool shade of the verandah surrounded by plants and flower pots.

They looked around and saw how clean the house was from outside. A wind-chime hung from the door and made a pleasant sound as the breeze blew. A little girl walked out of the door after several minutes. She was carrying a bundle of newspapers and magazines followed by the lady who had a basket of old bottles in one hand while the other had notebooks and textbooks.

Nandini looked at her with wide eyes. The little girl was about her age and wore a lime green frock with small white flowers on the border and looked like a doll going about her work. The girl carefully put the stack on the floor. She clapped her hands clean and ran inside. Her mother settled the bottles and the books on the other side and sat down on the floor herself.

“Tell me, what’s your rate?” she asked in a business-like tone that Girdhar felt slightly awkward about. He hesitated but again Nandini came to his rescue. “Newspapers for eight rupees a kilo, magazines and other books for nine and bottles – one rupee for a piece.” She had mastered this rate list on the various occasions when she had accompanied her father on business.

The lady smiled at the little girl’s confidence and suddenly called out to her daughter inside. “Pooja… Pooja!” At this, the doll-like girl came running out and stood next to her mother. She asked Pooja to sit down. As she sat down, the two little girls exchanged glances. Nandini looked at her shylywhile Pooja sized her up from head to toe. Nandini looked away at this and the business was resumed.

“Now Pooja, tell me, if you want any of these books?” Pooja’s mother directed her to the stack of notebooks and textbooks. Pooja started opening each notebook and flipping pages. Her mother busied herself with the bottles and the newspapers.

While Girdhar and the lady negotiated, Pooja started setting aside some notebooks. She suddenly interrupted her mother, “Ma, look! I got full marks on this test and the teacher gave me a ‘very good’.”

The lady, briefly diverted to her daughter’s past laurel, smiled and said, “Okay then, keep that one if it’s so dear to you. And keep all the books that you think you can pass on to others. We needn’t really sell them.”At this Girdhar’s face fell a bit as he was hoping to buy it all.

Nandini quietly walked over to Pooja’s side but stood at a distance trying to catch a glimpse of her books. She had already looked towards the inside of the house and noticed the same familiar corridor of darkness. She often imagined walking through it and reaching the other part. The thought always thrilled her but she knew it was never going to be possible.

Pooja turned around as she felt a presence behind her. She looked at Nandini closely this time. She noticed her callused brown skin and her neatly tied hair. Her large eyes seemed to send out a signal of despair. Pooja looked at her for a few seconds and signalled her to come closer. Nandini took baby steps at this and sat down next to Pooja. Their respective parents kept haggling politely while the girls busied themselves with books.

Pooja casually asked Nandini, “Which school do you go to?” At this Nandini drew a blank and Pooja asked again. Her mother intervened and presumed, “I don’t think she goes to school, Pooja, now don’t bother her so much.” She nodded her head but after her mother got busy again, whispered something into Nandini’s ear. At this both of them giggled.

Then Pooja found something again and pulled her mother’s sari-pallu. “Ma, look, my favourite poem! I won a prize for this one.” But her mother paid no attention. She was too engrossed in calculating the money she was about to make for the junk.

Pooja grabbed Nandini’s arm and dragged her inside the house. Nandini hesitated and froze but Pooja was way too strong for her. Unwillingly, Nandini let herself be taken into the house. She felt slightly dizzy passing through that corridor of darkness. At the end she saw a spacious room with beautiful furniture and paintings. Nandini was rapt. Pooja broke her spell by showing her the trophy she had won for the poem. They started talking.

“What’s your name?”, Pooja asked her affectionately like someone had asked her on the first day of school.

“I am Pooja. Nice to meet you, Nandini”. So saying she took her hand to shake it, and at this, Nandini became very stiff.

“So you don’t go to school? What do you do at home?” Pooja’s list of questions was endless.

Nandini’s voice rose slightly from a whisper, “I go to evening school near my house. For two hours everyday.”

Pooja asked again, “So what do you do rest of the time? Play?”

Nandini maintained her voice at the same pitch, “I help my mother with the housework. Cleaning, cooking, washing…” Nandini’s voice was choking.

She felt strange and lost in this big house. It was beautiful and scary. She wanted to go back to the familiarity of the transaction outside. A few tears rolled down her eyes.

Pooja was taken aback. “Why are you crying? Does your mother beat you? I will help you. Don’t cry.” Pooja went closer as if to wipe her tears but suddenly stopped. She withdrew her hand.

Suddenly her mother’s angry voice came from the outside, “Pooja, where have you taken that little girl? Haven’t I told you not to take strangers inside?” The girls looked at each other and then ran outside.
“Now tell me, which of these books you want?”, the lady asked her daughter sternly.

Pooja looked up at her and then at Nandini’s face. And then slowly pointed to a separated stack of books. The business was done and Girdhar started wrapping up. He shook Nandini by the shoulder and asked her to hand him the newspapers, bottles and the magazines. She obeyed as if in a stupor, still overcome. She looked at Pooja who stood by her stack of books. Pooja’s mother had gone inside. Once everything was wrapped up, Girdhar asked Nandini to follow him. Nandini felt the same unwillingness to move as she had felt while entering the house. She dragged her feet but the clean floor carried no footprints.

As they reached the gate, Pooja walked out of the verandah to see them. They loaded the scrap on the cart and Nandini stepped on.

Suddenly Pooja rushed inside and picked up her stack of books and went outside. She picked up all the books and notebooks she had set aside and ran out. The rickshaw had started moving. She yelled, “Stop, stop”. Girdhar brought his rickshaw to a halt. Pooja walked up to the halted cart and put the stack on it.

“This is for you. These are my books. They will help you at school. Please use them.” Pooja looked at Girdhar who was perplexed. He opened his mouth to say something but no words came out. Pooja shook Nandini’s hand again and walked back inside. Nandini looked at the stack and touched it and smiled as Girdhar pedalled away.