During my government school visits, I kept hearing about the poor performance of the school children. Some reports were alarming, pointing to the need for quality education in the government system. A question arose as to why the performance level of the children was getting worse every year. Some of the reasons put forward were that the children came to school only to eat their midday meal rather than to study, their parents didn’t want to educate them because ultimately, their children would have to take up manual labour like them, the children didn’t have a culture of reading or writing, they were interested in household work etc. These were facts based on their socio-cultural background. Food and livelihood is the first necessity of a human being but the true reasons were not known.

This article draws from an instance where teachers raised many queries regarding the poor performance of children. It was a school from a Hindi speaking state hence the entire conversation happened in the Hindi.

One day, a math teacher exclaimed that the children did not know anything, even to write the numbers and they could not be held back in a class because of the provisions of the RTE Act. Such explanations were not odd to hear. After a while, the teacher requested me to engage class 6 children.

While walking to the class, I thought that since I had not prepared any particular topic, I would have a normal conversation weaving in mathematical threads just to probe their understanding of the subject.

As I entered the class, the children stood up and welcomed me. I requested them to sit and started a conversation with them about what they did at home, their daily routine, their family, etc., and then steered the talk to math by asking a common question as to how many of them liked math? All replied that they liked math. There was chaos in the class. For a moment I was quiet. When the children saw that I was silent, they too quietened down.

I expressed my inability to hear and respond to everyone. Consequently, the class came up with a solution:

The children made the rules by themselves and it seemed they were responsible enough to follow them. 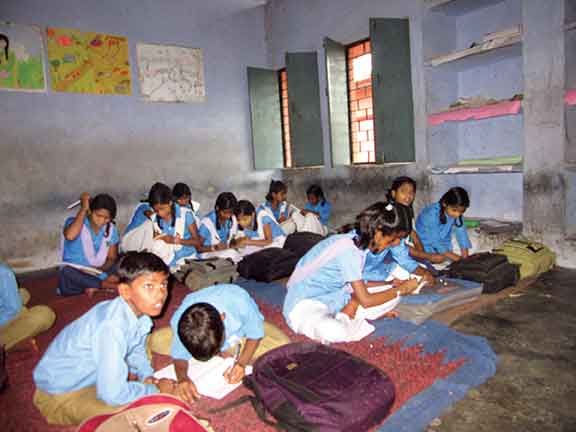 I resumed my conversation and there was more discipline in the way they responded. One girl bravely raised her hand and said that she liked math because she did not understand it all. A few of the other children began to smile, but this girl kept her hand up.

Making her comfortable, I called her beside me and praised her for being honest. A conversation took place between us:
Me: What is your name?
child: Neha (changed name)
Me: Do you visit markets?
child: No.
Me: Why?
child: My uncle goes.
Me: Okay, then what kind of work do you do at home?
child: I help my sisters in household work. We are three. Two of them study at GIC.
Me: Then how many are remaining at home?
child: I, one.
Me: With a smile I said, ‘You know subtraction. You just subtracted one out of three.’
child: (Murmuring) No, I don’t know. It’s not subtraction.
Me: Well. Suppose one day, you decided to help your sisters, so you took 15 potatoes to cook. Just then, your sister saw you with the potatoes. She said that these were too many, take out 5. Now how many potatoes would you have?
child: No answer.
Me: (Refined my question) Suppose one day you did the same, took 10 potatoes and your sister came and asked you to take out four potatoes. How many potatoes are you cooking?
child: No answer.
Me: You know. You are doing it at home. Here we don’t have potatoes. Right?
child: Nods.
Me: Okay. We can do one thing. We can draw potatoes on the board and then try.
She drew 10 potatoes and then rubbed 4 and counted the remaining and answered 6.
Me: Good. You have given the correct answer and you said that you didn’t know subtraction.

I added that every child in the class does math in the same way, the only difference is that others use their fingers instead of drawing. I asked two or three more questions based on single digits. She answered all the questions. I could see an expression of confidence on her face. The entire class became friendly and shared their difficulties confidently. They said they found it difficult to learn mathematical tables. I probed further and learnt more about their problems. It became very clear that all children except one or two could add two digit numbers and therefore they could prepare the tables by repeated addition. I explained how they can make any number table by repeated addition. I asked them to pair up in such a way that if one had difficulty in preparing the tables, his/her partner who was confident could help. The children agreed and came up with tables of different numbers like 12, 17, 18, 19, 71, and unexpectedly 81. I asked them to draw on chart strips and put it on the class wall which they did.. Other teachers were called in to see. They were all surprised that the same children had worked on the tables.

NCF-2005 states “Making mathematics a part of children’s life experience is the best mathematics education possible.” In contrast, we present mathematics in such a way that children find it process-oriented and try to learn these processes without understanding. Eventually, the subject becomes mechanical and a burden on the child and he/she resists learning.

I believe schools and students are the standards to measure one’s performance in the education realm. It is time for self-reflection. The ball is in our court. For instance, what is our own understanding of the subject? How many times do we go to the class with proper planning? Do we ever try to find out the social background of the children so that we can relate the subject to their life and become more sensitive? Are we approaching the subject the right way or are we only blaming others? Who are poor performers – we as teachers or the children as learners?

The author works with the Azim Premji Foundation at District Institute, Udham Singh Nagar, Uttarakhand. She can be reached at [email protected].