I have been reading about the proposed ban on tourism activities in core areas of tiger reserves in India (see box). I am not surprised at all by this move, having visited the Corbett National Park in Uttaranchal in July 2011. 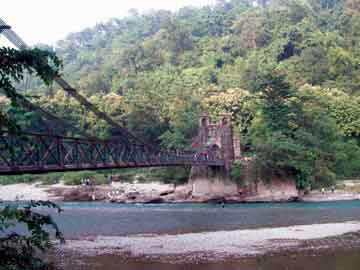 My daughter and I were on the last lap of a ride in my cousins’ sports utility vehicle, in which they had set out on an ambitious drive along the entire border of India. We had joined them on the leg across the spectacular Himachal Pradesh and were to get off at Ramnagar (the gateway to Corbett), en route to Delhi and then back home to Hyderabad. It was 11.30 pm, and as we neared Ramnagar, the drive suddenly became exciting as we began hearing forest sounds and seeing flashing eyes and outlines of civets and deer. The hope of seeing more animals was dashed because we were suddenly in the midst of an endless row of guest houses and hotels… there were so many that it seemed like we were back in a busy suburb! Where had the jungle gone?

The sight of those guest houses was the first shock at Corbett.

In the resort where we stayed, we were told that there are two sides to the jungle – one, the famous and much-in-demand Corbett National Park; and the other, the Reserve Forest. Since there was a waiting list for the Park visit, and as we had no patience to stand in long queues, we decided to go to the Reserve Forest. “Animals don’t distinguish between names of forests”, the naturalist/guide reasoned.

Another shock. Since we were told that there was no concept of a shared jeep, my daughter and I reluctantly hired ‘our very exclusive’ open-top jeep, forced to erase any concern about crowding the jungle with one more mechanical animal. The comforting factor was that our guide turned out to be a nice chap, well-informed and sensitive. The 4-hour drive began like a just-flagged-off rally, with one jeep after another speeding into the jungle, filled with tourists shouting, hooting, singing, making merry. Were they on a picnic? 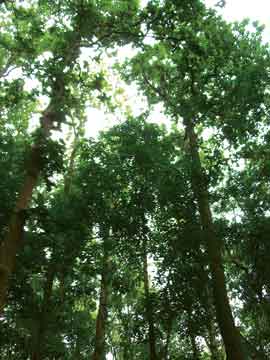 The drive into the forest
Corbett is an amazing jungle, and one finds a predominance of sal trees – the tiger’s favourite. There are also teak trees with humongous leaves, and several other tree species including Acacia (khair) and Indian rosewood (shisham). It is a beautiful, dense forest, and consists of grasslands, wetlands, riverine areas, water bodies and swamps.

Our guide sensed our concern for nature, drove slow and pointed out various plants, trees, and mudhills; alerted us to the bird calls; and explained various aspects of conservation. We told him that we were not expecting to see any animals – that we did understand that they may not be seen because of the people and their preposterous behaviour. His response was simple: “The most dangerous animals are the two-legged ones!”

We could not spot too many animals, definitely not the tiger. However, we did see spotted deer, which darted away startled when they heard the loud horn of a jeep that overtook ours and zoomed off hurriedly. We also saw rhesus monkeys, langurs, a monitor lizard, a serpent eagle, several white-crested laughing thrushes whose decibel levels seemed louder than those of the tourists! 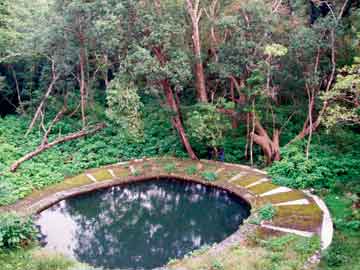 We drove deep inside, till we came to a temple called Sitavani where legend has it that Sita raised her twins – Lava and Kusha. It is not an impressive temple, but these legends are interesting. It is easy to imagine that Sita raised her children in this deep, beautiful forest, but then, there are many other places in India that are ‘home’ to the legend of Lava and Kusha, which is what our amazing country is all about, I suppose.

Outside Sitavani we also saw a small shop selling chips, biscuits and water in plastic packets. Yes, we also saw empty packets of the above strewn on the ground here and there.

We drove back from Sitavani as night fell. The forest took on a different hue… it was scary with the magnified insect and bird sounds, and the shadows. Add to this the tall trees, the clouds and the moon. After what seemed like a never-ending drive, with us wondering where the end of the forest was, and how our guide could find his way out, we were back into the dusty overcrowded village outside the jungle, and to our resort where a corporate group from Delhi were having a party on the lawns.

Entertainment culture
There are apparently about 150 resorts outside Corbett National Park. These places seem to have become huge money spinners, functioning basically as entertainment centres. Events are frequently held by business and corporate houses. The participants go wild, shout, play on the lawns, and invariably sing and dance to loud music. This is not what a jungle resort should be like! In my opinion, a jungle resort should have the responsibility to educate people and sensitize them to nature and wildlife. What is happening to our forests? What is happening to our tigers? Why are their numbers dwindling? What can we do about it?

Jungle lodges should ideally have very basic amenities, maybe not even electricity. They must offer meaningful, nature-related activities for guests. They could show them videos on conservation; educate them on the necessity for respect and silence while in the forest. Conservationists and naturalists could talk to people, make them aware of the wonders of our natural world. Jungle resorts should be about serious nature tourism, not corporate entertainment.

I have earlier been to Pakhal and Eturunagaram in Warangal district in Andhra Pradesh, to Nallamalla forest near Srisailam, to Bandipur in Karnataka, and to two sanctuaries in Africa – the Maputo Reserve (Mozambique) and the Nairobi National Park (Kenya). Nowhere did I see the crudeness, the unruliness, and the commercialization that I saw in Corbett. We used to go to Pakhal on a school picnic every year, and it was there that our love for nature took root. We had gone to the Eturunagaram forest at Tadvai several years ago… the forest was quiet, isolated, unpredictable and therefore gorgeous.

I recently learnt from the Forest Office in Warangal that Pakhal and Eturunagaram are now out of bounds to the casual tourist… you need official permission to go there, and there are no facilities for overnight stay. It made me sad when I heard this, for I feel people should have an opportunity to experience our forests.

Surely, the ideal lies somewhere between the isolation of Eturunagaram and the overpopulated Corbett?

On 24 July 2012, the Government of India banned tourism activities in core zones of tiger reserves in India. This is what some activists have said about the ban:

The author is a writer and editor and conducts nature awareness classes for children. She can be reached at sadhana_bluepencil@yahoo.com.