“It is not fair, to give fake news, such full credit.”

This was a colleague’s response to my earlier article on the phenomenon of fake news. I had argued that all instances of fake news are not examples of blatant lying; most of them are instances where people say what they believe. My concern was that all instances of “fake news” are misconstrued as wanton lying, and it is causing an epidemic of distrust. We need to trust that everyone has actively thought about things they say and share. Humans are not fundamentally untruthful and untrustworthy, neither are they fundamentally gullible or credulous. My colleague agreed that we should be seriously concerned about the depletion of trust among human beings but saying that we need to adopt a stance of trust towards everyone was a bit too much. Trusting that people share only what they believe to be true veers too close to an acceptance of what they say as truth.

Trust vs. confidence vs. unquestioning agreement
Does trusting other people amount to accepting everything they say unquestioningly? I think not. The mere fact that people would have thought about something before sharing it does not make what they say believable or true. They may not have thought enough, or they could have thought wrongly. Trusting does not mean accepting things that are being said. Trusting people to have thought about something, is not the same as having the confidence that they are right, neither is it an acceptance of what they are saying as completely true.

All that is fine, even very convincing, but, why trust? Is trust necessary for arguments related to the fake-ness of news? Or, does trust just sound like a nice thing to do? I was suggesting trusting people, even if we disagree with what they say, makes it possible for us to have a conversation with them about it. This conversation coming from a stance of trust would be non-adversarial, open, a quest for truth and it is very likely all the people involved in it would learn something from the conversation.

This kind of trust is necessary not only in arguments on social media, but also in the classroom or in most spaces where disagreements may occur. If we want a classroom to be a true learning space, teachers ought to trust that students think for themselves and form beliefs, even when they are giving different or wrong answers. I shall narrate a few kinds of behaviours I have often seen in my classes which seem to emphasize the demand for the kind of trust I am arguing for.

Beliefs untouched
Putting our beliefs and opinions to public scrutiny is a painful exercise. When students are confronted by criticism or ridicule of their beliefs, they distance themselves from any form of dialogue where they have to express what they really think about any issue. At such times, silence, arrogance, trolling, ridicule or refusal to participate in a conversation become masks of this underlying fear of ridicule. These masks serve as a fortress to ensure that one’s beliefs remain untouched by dialogue.

Even if one is convinced that people are respectful or will be accepting of contradictory beliefs, the courage required to be sincere to or authentic in expressing one’s beliefs requires deep trust in others. Genuine trust that people have reasons to believe what they do is essential if we have to establish a space for genuine dialogue, especially when disagreement is a real possibility. 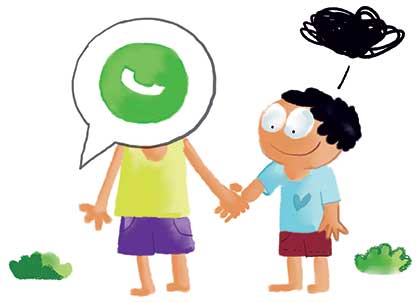 Correct answer syndrome
“…I find myself coming to realize that what hampers their thinking, what drives them into these narrow and defensive strategies, is a feeling that they must please the grownups at all costs. The really able thinkers in our class turn out to be, without exception, children who don’t feel so strongly the need to please grownups.” (John Holt; Page 17; How children fail)

This is what I like to call the ‘correct answer’ syndrome. Students, irrespective of their age, form an understanding of what teachers expect them to say. They make significant efforts towards trying to second guess the teacher, and answer in a manner that they think may be acceptable.

Similarly, in any conversational space, we intuitively get a sense of the predominant opinions of others. We have a broad idea of the expected ‘correct answer’. This leads to indifferent verbal agreement without an internalization or fuller understanding of other perspectives. These are largely futile dialogues.

Mere intellectualism
Perhaps the most difficult response to identify, or deal with is “mere intellectualism”. The conversation goes along flawlessly, moving from one premise to another, building arguments, hearing what each person says, and then trying to arrive at consensus. The sharing of reasons, comparison and analysis of good reasons, bad reasons, and a general respect for process happen flawlessly and irreproachably; however, this is merely an intellectual exercise where one is not affected by the dialogue. The problem, or the ‘issue’ is separate and independent of our self. In such cases, the person is bothered more about how they perform the task of argument-building rather than feeling genuine concern about the problem at hand. Such conversations invariably end with either of two exasperating statements –
“All this is good in theory but useless in reality.” OR “I have my own reasons to believe x. You have your reasons to believe y. Let’s agree to disagree.”

Trusting spaces should make it possible for us to be vulnerable. We should not have to be anxious about performance; we shouldn’t worry about whether we are sounding intelligent, good, rational, reasonable, or not. That in turn will allow us to expose our true reasons for why we believe something. Beliefs derive their meaning from our life experiences and authentic dialogue can only happen when things we say truly represent our life experience.

My reasons, your reasons, our reasons
Dialogue is a space where we exchange genuine reasons for why we believe something, and then collectively determine “what” is right, and not necessarily “who” is right. The object of dialogue then has to be the topic or issue, rather than people. A dialogue is not useful unless there is mutual trust among all participants. Whether it is a child we are teaching, a colleague we are arguing with, or news we encounter on social media, to trust means to allow the possibility that they may be right.

This in turn demands that we accept the possibility that we may be wrong. Dialogues and the ensuing exchange of reasons make (or should make) all participants aware of reasons why they believe some thing. When we converse, we also wonder why we believe one thing and not another, we become aware of our latent beliefs or misconceptions. The act of ‘examining’ a belief disturbs the sense of complacency that what we believe is true. An element of healthy doubt makes us re-examine things we believed, and things we did not know we believed. The next time we forward a WhatsApp message, or participate in a political rally or ‘like’ a Facebook post, in relation to something we dialogued about, we would pause and re-think.

In an authentic dialogue all participants should be acting out their beliefs and articulating authentic reasons for their beliefs. Arriving at truth, reaffirming or revisiting what we believe and knowing truth better should be our objective, rather than winning an argument, retaliation or putting someone down. I agree with Kant that it is our duty to “not distrust” others; an epidemic of distrust is far worse than consuming an occasional nugget of faked news and really conversing about it.