A posting as an assistant teacher at the Government Primary School, Pilang, is not an easy situation to be in. Pilang village has the dubious distinction of having a school in the remote Bhatwari block of Uttarkashi District. It is a steep trek of 18 km to Pilang from the headquarters at Bhatwari and when Sanjay Jagudi headed to the school as an assistant teacher some 11 years ago, many of the residents had not even seen a bus. The head teacher posted there at the time heaved a sigh of relief when Jagudi arrived and promptly went on long leave, leaving the new teacher to deal with the school, the children and the parents of those children.

Jagudi had some experience of teaching in a private school and always had a special affinity with the English language. Children in the Pilang primary school across grades were not able to read, write or recognize English. When he expressed his desire to start focused work in English, he was discouraged and almost laughed at. “It will be enough if they can write their names in English, you focus on Hindi and math,” was the advice he was given. Jagudi took this up as a challenge and slowly changed the ideas, attitudes and capabilities of everyone around him with regard to teaching and learning English.

Some of the strategies he adopted were: 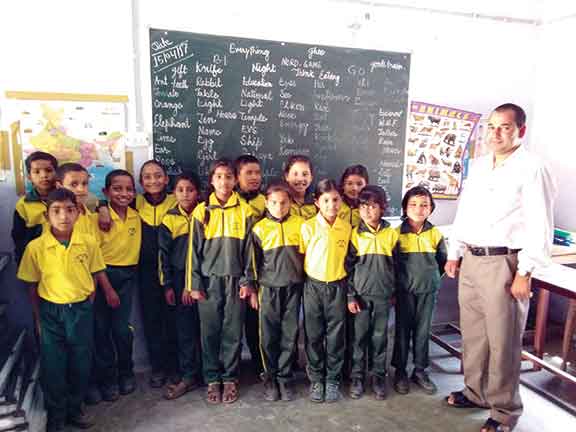 There is much more one can say about his methods but suffice it to say that the school now has English speaking, reading and writing as the norm. For the first time ever for Pilang, two of Jagudi’s students have gone on to pursue advanced studies outside the village.

It is commendable that he was able to change the face of language teaching by using the meagre resources available to him. He did all this merely by instinct and not on the base of academic pedagogical knowledge. Though he was transferred from Pilang early this year, he is sure that what he has taught and learnt there will live on.

He gives hope to all of us.

The author works with the Azim Premji Foundation as an English Resource person for Uttarkashi district. She can be reached at [email protected].