Living in China was not the only new and exciting aspect of our adventure. This was my first ‘real’ teaching job as a certified teacher, and working in China presents certain intricacies that test one’s resolve. One of our Canadian bosses once challenged us to see these as adventures rather than as irritants.

I didn’t know exactly what to expect on my first day on the job. The students hadn’t arrived on campus yet and neither had two of the five teachers who had been hired from Canada. We got a quick tour of the facilities. They seemed decent enough considering China was a developing country. 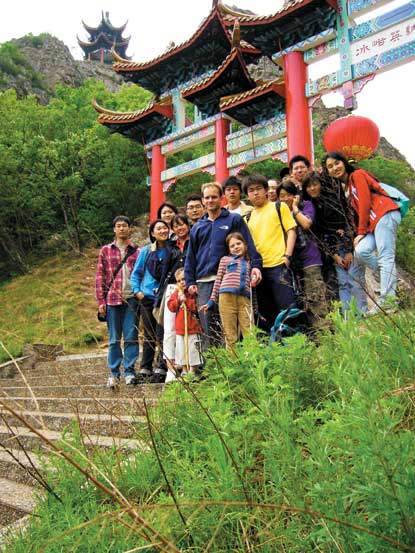 I learned that first day that the guy with the keys was one of the most important people in China. If I ever got hold of a key, I immediately went into town to have it copied. My key chain soon resembled a janitor’s and all my work pants were worn through at the front right pocket from the mass of keys I carried with me. When the students arrived they taught me how to break into locked rooms using their cafeteria cards. This resulted in dirty looks from the Chinese staff, but it was necessary on more than a few occasions.

Once when I had gone through all the proper channels and booked the library for one of my classes, we arrived to find it locked. The doors were held together with a bicycle lock. I examined the lock and noticing that it looked rather similar to my own bike lock, I pulled out my own key and gave it a try. It worked and I let my class in. When the Chinese librarian returned from her lunch break, a good ten minutes late, she demanded to know how we had got in. With a straight face I lied and said that I had found the doors unlocked.

With the classrooms, offices, textbook room, and computer lab all locked up there wasn’t really much we could accomplish that first day. The principal was equally shut out and had no clue how to affect any progress, having been in China only a week. ‘Let’s go for a walk,’ he suggested. He and I headed down the road and ended up at the beach. Across the street, makeshift restaurants offered barbequed meat skewers and local seafood dishes. We sat down and had the first of several bottles of warm beer. I hadn’t expected to start my first day on the job drunk at the beach, but with the principal’s active participation and encouragement that’s pretty much what happened. Day one working in China had been more adventure than irritant.

Irritants soon replaced adventures, and our Canadian principal quit after just five months on the job. He found out quickly that he had virtually no power. It was not that he was power hungry, but to run a legitimate Canadian high school program a principal should at least have the power to order a few pens or notebooks. He simply couldn’t take it anymore.

From a teacher’s perspective there is one absolutely fantastic aspect of working in China and that is the students. I worked in a private school where the students were from wealthy, well-connected families. The Chinese teachers said they were spoiled and disrespectful, but to Canadian teachers used to the rowdy crew of teenagers back home, they were a dream to teach.

The kids treated their Canadian teachers with so much respect. We seemed to represent their future dreams and aspirations – they all planned to study at universities in Canada or other Western countries – but unfortunately they didn’t always show their Chinese teachers the same respect. Walking the halls past classrooms when Chinese classes were in session students could be seen slumped over asleep on their desks, while the teacher carried on with their lecture.

For the lack of respect from students, the long days and the superficial curriculum that many of them are stuck teaching, the Chinese teachers are rewarded with pay about one fifth that of the Canadian teachers they share office space with and face salary garnishment for all sorts of things. This is surely unlawful in a so-called Socialist state but the dictatorship of the proletariat doesn’t require or allow unions, so there is little that can be done except to quit.

Despite the bureaucratic irritants, the freezing cold offices, and the ups and downs of staff morale, teaching in China has been a wonderful and valuable experience; an experience that allowed and pushed me to grow professionally and personally. Some people will tell you working in China is (excuse the term) crap. With the right perspective I think it is more like crab. It is something that needs to be handled delicately, requires perseverance and patience, but ultimately is worth the effort.

This piece of writing is a series of excerpts from the author’s own book Dragons, Donkeys, and Dust published by Bing Long Books (www.binglongbooks.com)

The author is an intrepid Canadian traveller, teacher, geographer, and ice hockey ambassador who lived and taught for 12 years in China. He can be reached at [email protected].