“It was my father who died last week,” she said without blinking. I stared at the girl with my mouth wide open.

It was on a rainy day that we – a group of ten teacher-trainees – first went to the school. Spread over an acre or two, the school looked all green with trees everywhere. It had four blocks with thatched roofs and a playground, large enough to accommodate the small strength of students. Entering the class, I saw the anxious faces of my students. Some came and touched the hands of their new teachers and spoke to us endlessly. 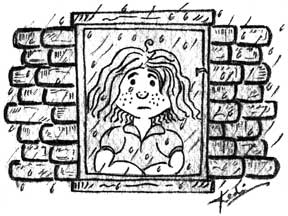 On the very first day itself we realized the gravity of the task allotted to us. Teaching students who were unaware of why they were there was indeed very difficult. A dark short boy was the first one who caught my attention. His friends often ridiculed him.

“Teacher, Vineeth doesn’t know how to write his name.”
“Vineeth does not know the alphabet by heart, teacher. He is a fool!”

This was the situation in an upper primary class. Therefore, the trainees had to work doubly hard to involve the students in their study.

It was raining heavily that afternoon. Akhil, my colleague, was reading out a short story and the students seem to have been enjoying it. But, a pair of indifferent eyes were watching the rain.

“What is your name?” I asked.
“Minu” she said grinning peculiarly.

I noticed something special about the girl. She was plump and shabby and had outgrown her uniform. The dishevelled hair and snorted nose spoke for her uncaring family. The perplexed look and the weird grin convinced me that she was a different child.

Days passed and I got busy with my teaching schedule. All the trainees were glad with the improvement that was evident in the students’ One day I was preparing for the class when I overheard my friends discussing the accidental death of a student’s father. I paused for a while and then resumed my work.

“What do you think is the moral of the story? Write it down and give it to me in ten minutes,” I said to my class and walked to the last row. The students immediately started their work. Some were scribbling and erasing. Some were thinking. Quite a few had already stated writing. I noticed at one end of the class, a girl who was on the verge of tears. “Is it her father who passed away?” I asked the class leader. Before he could reply, I heard, “It was my father who died last week,” It was Minu.

It took a few moments for me to get over the shock. When I finally did, I saw the stunned faces of the other students.

“He fell down from a building,” Minu continued as if to clarify.

A little later, I gained the courage to look at my student’s face. It was not innocence I saw, but a boldness that silently said, “we shall move on.” It was the same face that I had thought was ‘not-so-normal’. I felt myself immature before her. I went out and washed my face.

The author is a post graduate student in English and Comparative Literature at Pondicherry University. Her hobbies include reading and writing, with a short story and a few poems to her credit. She can be reached at [email protected].