Another day, another assignment about the coronavirus pandemic of 2020. For English class, we have to write a reflective essay about our memories of the pandemic and how our understanding of it has changed since then.

Last week, for history, we had to write a brief report about disease outbreaks over the past 100 years. And a few days ago, for biology, we had to research the latest developments concerning the vaccine that the world is still eagerly awaiting. It has ended up taking much longer than most people had initially expected and hoped. Turns out viruses are a lot more complex than human beings would like to believe.

So are the math problems that they inspire. My newest e-textbook is filled with questions along the lines of, “If a disease infects 11 people and has a basic reproductive rate of 1.2 per day, how many people are expected to be infected after 15 days?”

Ugh. I get it, COVID-19 changed the world. But do we really need to be repeatedly reminded about it in everything? The English essay about our memories of 2020 has become almost a staple each year.

I remember that it was the year I was supposed to start 5th grade but school didn’t open until 2021. We had virtual classes but they were almost pointless given the unreliable internet and how the teachers didn’t really know what they were doing. In the end, we were promoted to the next grade without any exams, something that was unheard of back then but is the norm now.

With internet connectivity issues and the risks involved with gathering in physical spaces, the government eventually came to the hard decision to do away with exams altogether. I know it was hard because I remember the prolonged protests and debates about that. Testing seemed to be the very foundation of education in this country and everyone seemed outraged about the sheer prospect of eliminating it. Fortunately, in consultation with international experts, an alternative system emerged. We now have continuous assessments in the form of aptitude ratings that determine which careers each of us is most suited to and what colleges we go to. We are supported to grow in the areas that we’re most inclined towards and get extra help for the challenging stuff.

Not surprisingly, student suicide has become a rarity now. Sometimes, I wonder who thought ranking children on their knowledge was ever a good idea. It seems completely absurd, almost cruel, now, though several countries in the world still do that. We learned about it in International Relations which is a newly introduced subject from the 8th grade onwards, along with Emergency Medicine and Nursing Science. Because the adults finally realized that we all need to know is how to care for each other. They’re mandatory courses because after we turn 18, anyone can be called on by the government to serve in healthcare if required, or be sent as a medic or a nurse in the military when needed, or to help an ally country in an emergency. When it comes to healthcare, the world has decided to largely cooperate and nobody is taking any chances.

School runs on alternate days now determined by where you live, so that on any day, it functions at about half the capacity. I attend on Mondays, Wednesdays, and Fridays, with Tuesdays, Thursdays, and Saturdays reserved for homework. It’s mandatory for all students to take the school bus, to limit the movement of people on a larger scale. Of course, the bus is sanitised each morning and we have to sit well spaced out.

Arriving at school, the first stop is the security box. It’s sort of like those scanners that were used at places such as airports, hotels, and shopping malls. But it’s slightly different because you don’t just walk through it. You step in and it seals around you to check your temperature and evaluate your protective gear. The official school uniform mask is made of triple-layered cotton fabric and it needs to be properly put on so that the sides are completely sealed and it rests exactly halfway up your nose. Your face shield also must be properly fastened, which is determined by the specialized revolving camera inside the security box. It sends a combination of audio and text messages to your phone to guide you about what needs fixing. It also scans your body for any unauthorized items. Nobody is allowed to carry anything into school property except their phone, which is where all learning takes place. Once the security box is satisfied with your temperature and face gear, the exit doors open but before you leave, it blitzes you – and your phone – with a fine mist of organic sanitiser. It smells vaguely floral and makes me sneeze, which is unfortunate, given how sneezing in public is among the most taboo things you can do. Most of the time, I successfully fight it back but then my nose ends up tingling for hours and of course, I can’t reach up and scratch it. Touching your face is also taboo.

There are many stories of some schools using questionable sanitisers in the security scanners and this has been linked to COVID-19 flare-ups. Even the schools that don’t have proper classrooms have the security box. I suppose priorities have changed. Classrooms are not that important these days because it’s not advisable to be sitting cooped up inside for long hours. 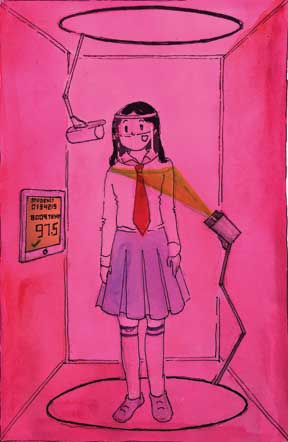 In fact, the best schools are known for their open-air learning spaces that have a shade for the sun and rain but let the breeze through. They’re also ranked based on the number of trees they have on campus. And there are many small schools with literally no facilities except arboretums. I suppose 2020 made people awaken to the need to reconnect with nature. I should put that in the English essay.

My school used to have a swimming pool that has now been converted into a garden of sorts. It’s filled with potted flowering plants and is a pretty sight, but I kind of miss swimming though. Several subjects have been scrapped from the curriculum. Sports, music, dance, art and craft, all those where you had to touch a lot of things or be too close to others. Touch is a punishable offence. I remember a while back, a teacher got fired for touching a student’s phone. But the parents didn’t press charges or she would have had to pay a hefty fine.

Phones have evolved quite a bit from what they were five years ago. They are now much thinner and come with extendable screens which are almost as easy to write on as paper. These screens also make it convenient to read the interactive textbooks. We do still have physical books available but they’re kind of just decorative and nobody ever reads them. It’s partly because of the risk of germs since paper can’t even be sanitised. But a lot of the grown ups are pretty sentimental about them, just as they are about ‘proper handwriting’. So we each have an old fashioned paper journal in which it’s mandatory to write at the end of each school day.

In the days before COVID-19, I lost so many of my favourite pens after people borrowed them, but that problem is solved now. You no longer just ask to borrow an item so personal that it has someone’s fingerprints all over it. It’s both rude and risky. I remember in the 3rd or 4th grade, teachers would sometimes call us forward to write something on the board, handing over a marker or piece of chalk that had been touched by so many other students. I’m not quite sure if that is a legit memory or a scene from one of my many pandemic nightmares.

The school day is shorter and divided into indoor and outdoor time that keeps rotating between grades. It begins with Happiness period at 7:45 a.m. and for my class, this currently happens outdoors on what used to be the soccer field. Several classes are spread out on different areas of the field to have their sessions simultaneously. We talk about our feelings and thoughts and share as little or as much as we want to. It used to be a kind of annoying activity at first but over time, it’s become something I look forward to each day. It winds up by 8.30 a.m after a short meditation, and we move indoors while those who were inside come out for their time in the fresh air.

Of course, just like on the bus, we always sit spaced out since only half the number of students attend each day. Everyone has water bottles marked with their names that get washed and filled by the sanitation team before we arrive each morning. We’re not allowed to carry them out of school and can get refills at the sanitation stations outside the washroom. We get blitzed with sanitiser before and after entering the washrooms.

As for food, different grades have snack breaks at different times. It’s usually some fruit such as an apple or two bananas to minimize the need for packaging or cutlery. The day winds up at 1 p.m. with a 10-minute traditional handwriting exercise. We have to pen down something we are grateful for. There is no school bell to indicate when time is up. Our phones ding in a synchronized way so that everyone heads out in small groups rather than all at once. Then, it’s through the security box again and onto the freshly sanitized bus.

At home, I drop my phone into the UV machine we have right by the door and head for a shower. I hate the smell of sanitiser on me but I feel it’s permanently settled into my pores. I must remember to mention that in the English essay too.

The author is based in Ahmedabad and loves to write and travel. She can be reached on Instagram – @worldofmehak.