T S Eliot had once referred to April as being the cruellest month. If the potty poet had been a tennis buff like yours truly, he would have slipped the word ‘December’ into the opening line of his incomprehensible poem ‘Wasteland’. Reason? After facing the slings and arrows of outrageous volleys, smashes and serves, tennis stars go into hibernation during the last month of the year; they make a welcome reappearance only in the month of January. While for the rest of the world, January means attending parties, thinking up unbelievably stupid New Year resolutions, greeting people, etc., for the avid tennis enthusiast, it means only one thing: the return of the Grand Slam in the form the Australian Open in Melbourne. As the fan sips his early morning coffee listening to the umpire saying ‘love all’, ‘deuce’ and ‘let’, a warm fuzzy feeling creeps over him. It’s as if God were in his heaven and all was right with the world.

In all games that we play, there are certain rules that have to be followed. In the game of golf, for example, when a player tees off, he shouts ‘fore’. This serves as a warning to the others on the course that a ball may be headed in their direction. There was a time when such a practice was followed in tennis as well. In the old days, when a player was about to serve, he used to call out ‘tenetz’. It is from this Anglo French word meaning ‘take, receive’ that we get the word ‘tennis’. Like ‘fore’, ‘tennis’ was used as a call to one’s opponent telling him or her to be ready to receive the serve. We no longer draw the attention of our opponent in this manner when we are on court. 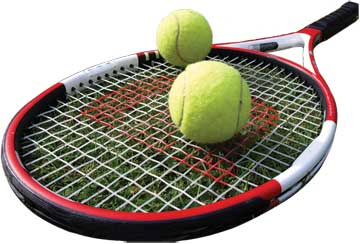 Tennis is a game played with racquets, and a professional nowadays has a wide variety to choose from: companies like Wilson, Prince, Yonex, Head, etc. vie with one another to get a top player to use their product. In the old days, when the game was in its rudimentary stages, there were no such sponsorships. It’s understandable, for the racquets that players used were nothing like what we see today. In its earliest form, the game was not played using ‘racquets’, the player made use of the palm of his hand. In fact, the word ‘racquet’ is from the French ‘requette’ meaning ‘palm of the hand’. The tennis player did everything: serving, hitting forehands, lobbing, etc. using his ‘racquet’, the palm of his hand.

When a player gets ready to serve at the beginning of the match, the umpire does not shout ‘tenetz’, but he does say ‘love all’. This seems a rather strange, if not silly thing to say to the participants. Why should two opponents who are going to be at each other for the next hour or more, love not only each other but all those around them? Why should they ‘love all’? If you are keen on winning the match, shouldn’t you put on your ‘game face’ and go about annihilating your opponent? This would be difficult to do, if you are expected to love the person standing on the other side of the net! So why does the umpire insist that the players ‘love all’? Well, believe it or not, this ‘love’ has nothing to do with affection. The word ‘love’ in the context of tennis is actually a corruption of the French word ‘l’oeuf’ meaning ‘egg’. As we all know, the round shape of the egg reminds people of the number ‘zero’. So, when an umpire says, ‘love all’, he is merely announcing the score; he is informing the spectators the score is ‘zero all’, that neither player has won a point.

When there has been no point scored, the man sitting on the rather tall chair announces ‘love all’; when the points become even at forty all, he lets the world know that the score is ‘deuce’. Now what is the connection between ‘deuce’ and forty all? There seems to be none. So why the deuce does the umpire say ‘deuce’? Like the word ‘love’, this ‘deuce’ is actually a corruption of the French ‘deux’, meaning ‘two’. By announcing that the scores are tied or ‘deux’, what the umpire is implying is that in order to win the game, one of the two participants has to win ‘two’ successive points.

Enough of tennis? Should I just ‘let’ you be? One for the road before I let you go, perhaps? When a player serves, and the ball clips the net and falls over to the other side, the umpire doesn’t say ‘net’, but ‘let’. The player is asked to serve again. What does ‘let’ mean in tennis? Is it a corruption of some French word? The answer is no. In Old English, ‘let’ meant ‘hindrance’ or ‘obstruction’. When the umpire calls a ‘let’, what he means is that the flight of the ball was obstructed by the net.

Let’s hope there are no ‘lets’ – power cuts – when the Australian Open is broadcast. Happy viewing!