I teach a foreign language for Class 8 – German to be more precise. There are 20 students in my class. Considering the number in the other subjects, it is certainly a smaller group. How do I teach effectively so that my students are able to speak the language and not merely read and write?

Children of that age group normally love learning a foreign language because of the novelty, the challenge and the fact that it sets them apart from the others. Work on this enthusiasm to train the students. 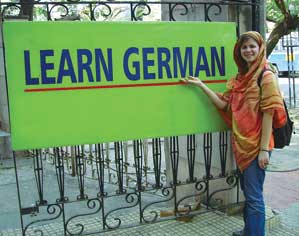 Begin with the letters of the alphabet. You can download the audio version of the German alphabet from the free websites. Play it on a regular basis so that they get exposed to native speakers right from the beginning. Sing the letters with them as you would do in Kindergarten. Remember, these children are your Kindergarten students as far as German is concerned, and this is how they would learn the letters in that class. Although older, this is their language level. Have them spell out their names and the names of their classmates in German. Introduce them to tongue twisters in German so that they get the sounds of the language right. In the process, they will also learn additional vocabularyInflatable Water Games!

When you come to numbers, ask them to give out telephone numbers, number of students in a class and all the other things that they are familiar with in German. The class will be roaring over the mistakes they make. For example, some may say that their mother is 14 years old instead of 40!

Use songs and rhymes. The melody and the beat will help them remember and recall these totally new words and sounds. For example, sing Happy Birthday to you in German (Zum Geburtstag viel Glück) and ask them what it is. Your students will be delighted to tell you that it is the birthday song because they would have identified the tune! Mixing the known with the unknown sets their fears to rest. Many a student doesn’t do well in a foreign language because it is the fear of the unknown. Set their fears to rest, and you will have a group of enthusiastic students who will want to do more than the prescribed syllabus.

In order to master the sounds of the language have them read aloud from the book. Get them to practise passages at home and demonstrate them in the next class. Homework need not be confined to writing alone. 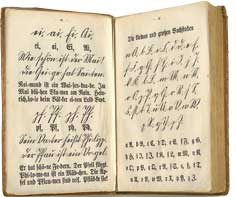 Conjugation of verbs is something that is a slightly difficult in German, so give them ample practice. Give them as homework one or two verbs to conjugate and get them to reel it off in class the next day. Quiz them as often as possible. With the kind of small group you have, there is scope for that. Students will vie with one another to get it right. Going at a snail’s pace initially will give them the firm grounding that they need to master the language.

Get students to role-play situations such as greeting one another, introducing one another, saying good-bye, and all the other fundamental vocabulary that they have learned. The more they use these words, the easier it is to remember.

There are several free web sites that have the audio version of everyday conversations. Play these to students so that you develop their listening skills as well. Toss questions to them to make sure that they have understood. Give them the links so that they can listen at home too. Listening to the language is the first step towards mastering it.

Write out brief comprehension passages based on the grammar and vocabulary they have learned. Quiz them on it by reading out and asking them, instead of giving it to them in writing. Encourage students to talk for a minute once a week on any topic−about themselves, their family, their school, etc., depending on the kind of vocabulary that they have been introduced to so far. This will make them confident speakers.

Use flash cards to introduce new words. If you are dealing with the names of fruits, show them the flash card of an orange. Then you could ask them what colour it is, what shape it is, who likes oranges, etc. In the process of learning a single word, they would also be getting used to question words. If you are able to make power point presentations for your students to view, so much the better.

With all this built into your lessons, you will have 20 enthusiastic and motivated students who will tell you, “Wir lieben die deutsche Sprache!” So go ahead, and give them this love of the German language, or for that matter, any language that you are teaching.