‘Hum tum ek kamre mein bandh ho aur chabi kho jai’ croons Rishi Kapoor to his sweetheart Dimple Kapadia in the movie Bobby. One can sing songs about being locked in a room with one’s sweetheart but in reality, the thought of being locked in gives nightmares to even the bravest of us! Locks and keys are indispensable to our lives. When locks were first designed, they were considered great works of art and the locksmith was treated as well as the court poet or the artist.

Every civilization devised unique ways of guarding valuables. Early civilizations must have hidden their treasures in tree trunks or buried them deep underground. Some placed their treasures in ponds or swamps surrounded by crocodiles, while others used the Gordian knot. One of the earliest mentions of locks is found in the Old Testament.

When first invented, locks were meant only for the rich as only they who had valuables that needed guarding. Since hiring security guards was not always a reliable option locks became popular. The first locks were all made of wood and the mechanism involved pins or pin tumblers. Pin tumbler locks have small springs or paired pins enclosed in small cylindrical plugs. When a key is inserted, the notches carved in the key align these pins to open the lock. This mechanism was the precursor to the modern pin tumbler locks.

The Romans further improved upon the pin tumbler locks and made locks from metals like iron and bronze. An improvement in the Roman version of locks was the placement of wards in the locks. Wards are essentially projections or obstructions inside the lock that a key must pass in order to open the lock. The warded lock or the ward lock is also said to have originated in China around the same time and spread to Europe during the middle ages. A ward lock consists of a series of obstructions or plates that protrude outwards and block the rotation of an incorrect key. These wards or obstructions can be simple or complicated.

Like the ward lock, a padlock was known to have been developed simultaneously in the Greek, Roman and Egyptian eras. Padlocks were also known as travel locks as they were used to secure valuables on ships and to lock in prisoners. An interesting version of the padlock was the puzzle padlock which evolved to become what is now called a dial lock or the bank vault lock which operates without keys. 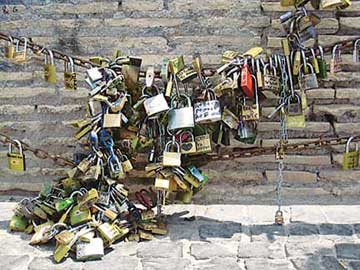 The tubular lock has pins positioned around the circumference of the cylindrical plug. Tubular locks are more expensive and complex to make than the simple pin tumbler varieties. Another variation in locks is the lever lock which originated in the 17th century in Europe. Lever locks are mainly used in safes and as door locks.

With advances in technology, locks have further evolved and now come in a variety of sizes and shapes. There are electronic locks now which operate on latest technologies like RFID, electrical currents or key cards.

Any talk about locks and keys is incomplete without the mention of famous locksmiths who’ve made a mark in this art. Locksmiths were revered by kings and queens for their craftsmanship and ingenuity.

One of the earliest known locksmiths in the world was Al-Jazari a famous Islamic scholar and inventor who invented a combination lock around 1206. His book Kitáb fí ma’rifat al-hiyal al-handasiyya (Book of Knowledge of Ingenious Mechanical Devices) describes 50 mechanical devices and instructions on how to construct them.

Joseph Bramah was another famous locksmith. In 1784, he invented the safety lock. The safety lock has an interesting history behind it. When Bramah first made the safety lock he challenged people to open the lock and announced a prize of £200 to the person who could pick his prized lock. A.C. Hobbs finally won the competition after 16 days of toil.

The first detector lock was patented by Jermiah Chubb in 1818. A detector lock is basically a modified lever tumbler lock. These improvements include a security feature that shows the owner of the lock whether it has been tampered with. When picked by the wrong key the detector lock jams the key which can only be opened by a special regulator or the original key.

James Sargent invented the combination lock and the unique time lock in 1857 and 1873 respectively. A time lock only allows a lock to be opened at a pre-set time. In 1916 Samuel Segal, a New York city police officer patented the first jimmy proof lock. Jimmying means forcing a door open with a crowbar or a similar tool. Harry Soref improved upon the padlock and modeled the first laminated steel lock casing in 1924.

Arts and museums around the world showcase locks and keys from different eras crafted to perfection by master locksmiths. In fact, a museum dedicated to locks exists in Terryville, Connecticut.

There aren’t many advances in the art of lock and key making now except the advancements in electronic locks. Lock smithing maybe a dying art but locks and keys are here to stay for as long as we want to secure something.