Being sensitive to other people’s feelings seems to be the ‘in thing’ these days. When we speak, we are told to mind our language. We are requested not to make use of words which might hurt the feelings of others. Bluntness is out, and vagueness is in. If a person is obese, it is not polite to call him ‘fat’; instead, we should say that the individual is ‘horizontally challenged’. Similarly, a pipsqueak is not ‘short’, he is merely ‘vertically challenged’. The man who comes to collect our garbage is suddenly transformed into an engineer: a ‘sanitation engineer’ to be precise! Hey, if our useless politicians can be given honorary doctorates, why can’t these people receive an engineering degree? After all, our sanitation engineers do much more useful work than our elected representatives!

In the old days, expressions like ‘vertically challenged’, ‘horizontally challenged’, and ‘sanitation engineer’ were called euphemisms. They have now been given another label, they are called ‘politically correct’ language: PC for short. We are expected to do and say things in a politically correct manner. Of course, this notion of political correctness is sometimes carried to the extremes: in our attempt to keep everyone happy, we go too far. In Australia, for example, people who were training to be Santa Claus, received a rude shock when they were asked not to greet children at shopping malls with the standard Santa greeting, ‘Ho, ho, ho!’ They were requested to replace the greeting which has been around for several hundred years, with a meaningless, and some would say ridiculous, ‘Ha, ha, ha’. Reason? Santa’s standard greeting was no longer considered PC! The ‘ho’ reminded some people of the American slang word ‘ho’ meaning ‘prostitute’! In some countries, it is no longer considered PC to wish someone a ‘Merry Christmas’. It has been replaced by a much more staid, ‘Happy Holidays’! Christmas carols are now being referred to as ‘holiday music’ and Christmas gifts as ‘holiday gifts’. 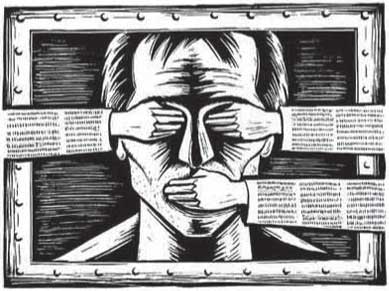 This absurd notion of political correctness has invaded the teaching profession as well. Teachers, who were once the lord and master of all they surveyed, have been asked to put their tongue on a leash. In Scotland for example, the School Board has requested ‘facilitators’ (teachers) not to label children who dominate others as ‘bullies’. The argument given is that such labelling adversely impacts the student, often giving him/her a complex. Teachers have been asked to refer to bullies as ‘those displaying bullying behaviour’, and their hapless victims as ‘those experiencing bullying behaviour’. A slew of politically correct terms have invaded the teaching arena. Many terms which we use in our everyday conversation have been given a makeover. My fellow teachers will be happy to know that they will no longer have to put up with ‘lazy’ students in their classroom; learners, however, may be ‘motivationally deficient’ or ‘energetically declined’, but certainly not lazy! As for the student who is too scared to open his mouth to answer questions, he is not ‘shy’, he is merely being ‘conversationally selective’. If you catch someone looking out the window, don’t categorize him as a ‘daydreamer’, for the learner is merely ‘rationing consciousness’. You may find that some of our ‘ethically disoriented’ (dishonest) learners often resort to ‘academic dishonesty’ (cheating) whenever there is an ‘assessment’ (test/exam) of any kind. Do not let the ‘discreet exchange of penned meditations’ (chits) during exams or the use of ‘previously used prose’ (plagiarism) in his assignments, colour your opinion of the learner. Remember, your learner may have ‘deferred success’, he does not ‘fail’. 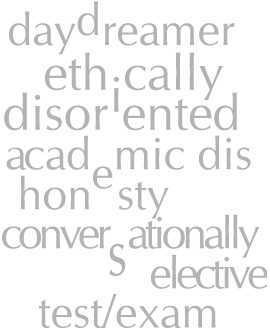 If this ridiculous trend of being political correct continues, chances are our textbooks are going to be full of stories written in the following manner in the not so distant future.

As I entered the house of corrections (1), the security engineer (2) informed me that my client would be added to the list of the living impaired (3) in a matter of two days. His non-human animal companion (4) eyed me lazily before tearing into his breakfast. The client of the correctional system (5) whom I had come to meet had been in residence for over ten years; he was a well-known columnist who had been found guilty of adding to the street activity index (6). Ten years ago, after a particularly heated argument with the domestic engineer (7), this wielder of the portable handheld inscriber (8) put on his bovine controller officer’s hat (9) and set off to the local wildlife preservation centre (10) in his pre-owned vehicle (11). At the entrance, he was accosted by a gerontologically advanced (12), financially inept (13), residentially flexible (14) individual who brusquely demanded for money. First, words were exchanged, then blows, and in a matter of seconds, the economically marginalized (15) individual collapsed to the ground. Realizing that the victim was temporarily metabolically abled (16), the columnist requested for an ambulance. The unaffiliated applicant for private sector funding (17) spent a day in hospital before having a negative patient care outcome (18). 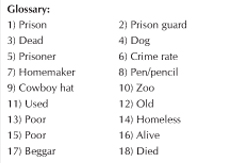