S Upendran
The expression ‘an apple a day keeps the doctor away’ was probably the brainchild of someone who had an orchard. How else can one explain a dramatic swing in the fortunes of a fruit that supposedly brought about the downfall of Mankind? Overnight, it was transformed from a villain to a saviour. The liberal sprinkling of idioms with the word ‘apple’ in them is a testimony to the love-hate relationship that native speakers have with the fruit.

A prized possession or a person whom one likes very much is sometimes referred to as ‘the apple of one’s eye’. It’s an odd expression considering it is next to impossible to lodge a fruit the size of an apple in one’s eye. The very thought of attempting to squeeze one through the socket sends a shudder down the spine, doesn’t it? Before you let your imagination take flight, let me quickly add that the ‘apple’ in the idiom doesn’t refer to the fruit, but the ‘pupil’ in one’s eye. Several hundred years ago, people were of the opinion that the shape of the pupil was similar to that of an apple’s. In fact, for quite some time the word ‘aeppel’ was used to refer to both the eye and the fruit. The pupil, as we know, is a priceless possession because without it we would be in the dark: we would be blind. Since vision is something that all human beings value, the expression ‘apple of one’s eye’ came to mean something that is greatly valued or treasured. 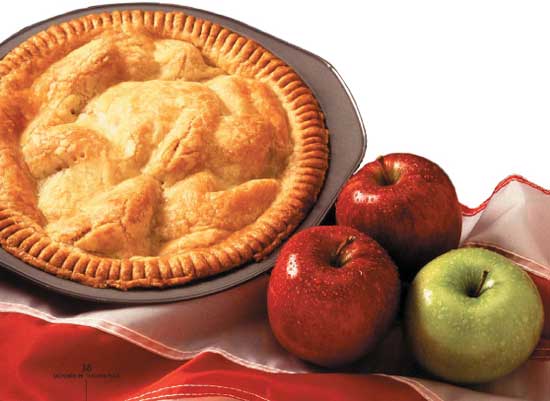 Like the Brits, the Americans too are extremely fond of this fruit: after all, what can be more American than apple pie! The expression that Americans use to describe something when everything has been neatly arranged and things are in their proper place is ‘apple pie order’. Scholars believe the idiom is a corruption of the French ‘nappe plie’, meaning ‘folded linen’. But the popular story doing the rounds is that it was the actions of Colonial (that’s what the Yankees were called before they got their independence) housewife who lived in New England, which gave rise to this idiom. The story goes that this lady was in the habit of baking seven apple pies every Sunday – one pie for every day of the coming week. Once the pies had been baked and cooled, she proceeded to place them on different shelves. The pie that was to be eaten on Monday was placed on the first shelf, the one to be eaten on Tuesday on the shelf next to it, and so on and so forth. The lady was so meticulous, that she made sure that all the pies were lined up just right. It’s interesting to note that while everyone commented on the arrangement of the pies, there is no mention of how good the pies actually tasted. The proof of the pudding, after all, is in the eating!

Apples, as we know, come in various colours, shapes and sizes. Some are big, some are small, and some believe or not are the size of New York City! The term ‘Big Apple’ has been used to refer to New York, since the 1920s. There are many theories as to how this ‘city that never sleeps’ came to be named after a fruit that gives doctors a run for their money. According to one theory, African American stable boys working in the racetracks of New Orleans were the first to refer to New York as ‘Big Apple’. Many of the important horse races were held in this city, and it was the dream of most jockeys and boys working in stables to be there. If one managed to make it to New York City, one had arrived; one had made it ‘big’. A sports reporter, John Fitzgerald, heard about the term, and liked it so much that he called his popular racing column, ‘Around the Big Apple’. In his introduction to the column on 18 February 1924, he wrote, “The Big Apple. The dream of every lad that ever threw a leg over a thoroughbred and the goal of all horsemen. There’s only one Big Apple. That’s New York.”

The fruit isn’t always associated with something good of course. When you say that something is the ‘apple of discord’, you mean it is the cause of dispute; it is the bone of contention between two parties. If the legend is to be believed, when Thetis and Peleus got married, they invited all the Greek gods, except the god of Discord, Eris, to their wedding. Makes sense, doesn’t it? Nobody wants a disagreement or a quarrel during a wedding. Eris was angry she hadn’t been invited, and decided to ruin the ceremony by tossing a golden apple among the guests. On the apple were written the words, ‘For the fairest’.

Three goddesses, Hera, Athene, and Aphrodite fought for the apple because each believed that she was the fairest of them all. Since they didn’t have a magic mirror, which could tell them who among them was the fairest, they requested Paris, the Prince of Troy, to decide the matter for them. Like the politicians in our country, each goddess tried to bribe Paris to cast his vote in her favour; Hera promised him all of Asia, and Athene promised him glory in war. Aphrodite, the Goddess of Love, knew what a young man with raging hormones desired; she made him an offer which he just couldn’t refuse. She promised Paris the most beautiful woman in the world; a woman whose face was capable of launching a thousand ships. Like any man who has been deprived of his senses, young Paris handed over the apple to Aphrodite, and in return he got the beautiful Helen. Hera and Athene, as expected, were extremely angry with Paris and they plotted his ruin. The beautiful city of Troy was destroyed because of a silly apple!