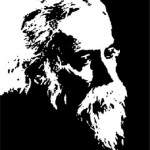 When I alighted from the Shantiniketan Express whose walls had large portraits of Tagore, I had no idea that Shantiniketan would also be a serene monsoon getaway. The station seemed to belong to the place – quaint, a movie set swarming with hordes of extras as passengers and coolies. In my imagination-geography, where I often travelled to distant lands, Shantiniketan never figured on the itinerary either by way of a stopover or a detour. But here I was, standing on the platform, about to step into the July rains that coincided with my visit to Shantiniketan. Our host, Chumki, belonged to the upper echelons of Bengali society. She had invited my friend Vaibhav and me to her vacation house in Shantiniketan.

Upon reaching her bungalow, Chumki snapped her fingers to summon her retinue of servants who arranged a lunch assortment of maachh, fried aaloo, mishti doi and daal-bhaat, the quintessential Bengali menu followed by dessert. Full on fish, I sat in the backyard overlooking an infinite paddy field with distant houses on the horizon and clicked away with my borrowed digital camera.

We went into town in the late noon in Chumki’s Ambassador – a white bulky monster enjoying a walk in the rain by itself. The downpour curtailed our plans, postponing them to the next day. Dinner was replete with meat delicacies and a customary glass of toddy brewed fresh from the plant, served with Chumki’s tales of the British times, of the aristocracy and the maharajas of pre-independence India. She introduced her joy of drinking in her anecdotes, often giving them colourful turns producing a fresh round of rippling laughter each time. This was hardly the Shantiniketan I had imagined, a surreal resurrection of Chumki’s past recalled in a monsoon theatre.

The next day, we went to see the university and the Tagore museum. The rain-washed buildings in large green compounds of the university seemed to embody Tagore’s own dignity. The serenity of the place was inspiring, with students engrossed in books under trees. We declined a paid tour of the place choosing to explore on our own. Wandering along the hostel corridors, we reached the canteen, a stuffy little room where students were eating. While some had come to Shantiniketan to be a part of its rich, cultural heritage, others did admit that career prospects at Shantiniketan remained limited. Their accounts revealed a different image of Shantiniketan – a secluded world of intellectual pursuits that didn’t really open up a route to the commercial world. They asked us the same questions back, as to where we came from and what we did. Our response seemed to disconcert them. Their expressions assumed an unfriendly air and we thanked them and proceeded to the museum.

Shantiniketan as a place belongs to the spirit of Tagore manifest in his large portraits and towering sculptures at every turn and curve in the city. The museum evoked a sense of knowing Tagore through his letters, pictures, hats, coats and portraits. His intellectual prowess appeared misplaced in the milieu of this pompous public display. His physical stature grew in a sculpture or a portrait but shrank in the almost vulgar display of his genius, on show for everyone to admire.

The rest of the day was spent shopping, eating and sightseeing. At our next destination, Aalcha, the name that hadn’t left Chumki’s lips until we got there, our sightseeing stamina began to give way. We sat down for tea and fried snacks while Chumki shared a laugh with the person behind the counter with the familiarity of an old aunt visiting after a long time.

The evening fatigue was addressed by a choice of beverages. The merry mood was soon disrupted by the news of bomb blasts in Mumbai’s local trains. A power failure further sobered everyone down. As we sat there chit-chatting, another place had been illuminated on my imagination-geography, a Shantiniketan more real to me now.