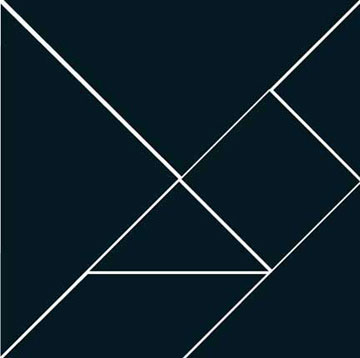 Some of us like to puzzle over words, others like problematic numbers while quite a few of us enjoy grappling with logical conundrums. And then there are those who are more visually inclined, who like to wonder over the elements of pictures and shapes and how they fit together to make meaning. The most popular form of visual puzzle is the jigsaw (which supposedly was invented by a European cartographer in the 18th century), where a picture is broken into a number of pieces, usually irregularly shaped, that must be put together to re-make the whole. A different sort of visual puzzle, which uses geometric shapes that fit together in many ways to make meaningful shapes, is the Tangram, said to have its origins in China. The earliest known document describing the puzzle dates to 1813 but the game is thought to have been several centuries old by then, perhaps not recorded because it was played mainly by women and children, and therefore not thought to be worthy of serious attention! It was made popular in the nineteenth century by the opium traders who often played the game on their travels.

Tangrams use varying arrangements of seven basic geometric shapes called ‘tans’ – five triangles of different sizes, a square and a rhomboid. The game lies in trying to recreate a solid figure such as those shown here, using all seven pieces. The proportions should exactly match the given shape, with no extra indentations along the edges.

Try your hand at the tangrams shown here. Remember, you need to use ALL seven pieces to build the figure, and in EXACTLY the same proportions! You can play the game with another person, by setting a time limit within which you need to finish as many as you can. Often tangrams are played in a competitive manner, each person using his or her own set of tans.

Make your own tangrams
Tans can be made using any reasonably stiff material that can be cut or formed into a shape. Draw a one inch (or 3 cm/4 cm.) grid on the material to make a puzzle of a comfortable size. Then mark off the white lines as shown in the figure. Cut carefully along these white lines. This will produce the seven tan pieces. Note that slicing rather than sawing will produce the best result. The wider the cuts, the more the pieces lose along one or more sides, making the piece not quite “true”. A knife or thin cutter would work well.

You can also create your own puzzles and categorise them into various types of shapes (animals, people, things or symbols) – and try making some of your own. Let us know if you had fun with them. Even better, send them to us so we can share them with other Teacher Plus readers! 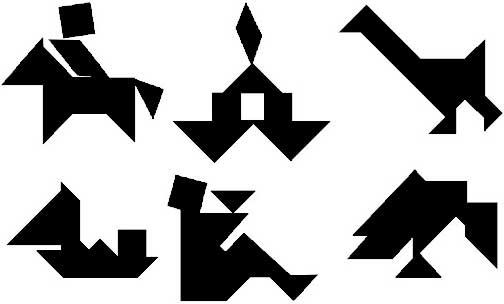