The debate on school education in India is one with many ramifications, and there is a very distinct drawing of lines between mainstream education and alternative education. 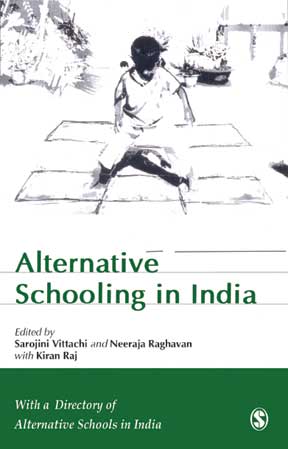 “When… the mainstream resists the assimilation of new ideas, the system ossifies,” says Prof. Krishna Kumar’s in his Foreword to the book Alternative Schooling in India, edited by Sarojini Vittachi and Neeraja Raghavan, emphasising that the system needs to be made porous enough for new ideas to slip into the system and germinate there. Like he rightly points out, this book opens up such a possibility.

Sarojini Vittachi’s introduction clarifies straightaway that alternative education is explored here as “enhancement of education”, and discusses what education needs to be. She also sets down some ideas about what a “relevant and liberating education” should include – for instance, being child focussed, allowing learning in multiple ways, meeting a child’s life-enriching needs, etc. Such education, she points out, is actually an alternative to mainstream education, which focus on results and ranking.

Rather than define alternative education, the book identifies a set of features which alternative schools have one or more of (boxed on facing page). Each of these features bears much thinking about, and there are many different ways in which each finds expression – as one finds out when one goes through the directory of schools later in the book. The book progresses from a brief overview of the history of alternative education and establishes a continuity right to the present day: and in drawing attention to this, provides a heartening view in that we find more and more dissatisfaction with mainstream education today, a sure sign of better things to come.

Neeraja Raghavan’s enquiry into whether, and how, innovations from alternative schools can spread to mainstream schools is revealing in that it is a comment upon not only the ‘system’ but upon individuals as makers of the system. On the one hand, she highlights the gaps in the system that need to be addressed, such as the necessity of periodic refreshment of in-service teachers through training and sabbaticals, making teachers versatile by encouraging and even requiring them to learn a subject other than theirs, or the need to empower teachers with a sense of professionalism by addressing monetary concerns and to meaningfully involve parents as partners in the education of their children. On the other, Raghavan also suggests that learning materials be constantly reappraised and vibrant material offered to children. And in seeking that inspirational tales of true learning be given a platform, she points to the need to also constantly assess our teaching techniques and methodologies. And lest one take all this as a good lesson but impractical, she sums up her argument quoting Margaret Mead: “Never doubt that a small group of thoughtful, committed citizens can change the world. Indeed, it is the only thing that ever has.”

The section “Come after school” showcases the efforts of some mainstream schools that try to meet the needs of the students despite the bind of the system – and in doing so, offer some possible solutions for other schools that want to do the same.

The last section of the book is a Directory of Alternative Schools – a veritable mine of information made available for the first time in a printed form, with some information about each school. The editors acknowledge that this is neither an exhaustive list, nor one that in any way judges the quality of the schools – those are tasks that still have to be taken up, and the hope is that schools themselves will come forward and ask to be added to the list!

One does feel, however, that some issues could perhaps have been discussed in greater detail – for instance, although there is no single idea of ‘alternative’ schooling, there are clear differences in the various philosophies that these schools follow. The Krishnamurthi schools, for example, discourage competition, but this is not necessarily true of the others. Some light could have been thrown on such philosophies in practice by other practitioners too, for the benefit of the interested parent or teacher. One also hopes that for further editions of this book, school visits be made and a closer look is taken at each school: this kind of engagement will add immensely to the value of the book.

That said, one must acknowledge that Alternative Schooling works not only towards increasing the awareness about the existence of alternative schools, but plainly shows that when one speaks of “alternative schools”, one is pointing to a variety of alternatives to the existing educational norms. And in doing so, it opens up the possibility for individual schools to take up new ideas and addressing the lacunae in the system at the micro level – where they really can make the difference.

Edited by Sarojini Vittachi and Neeraja Raghavan
with Kiran Raj
With a Directory of Alternative Schools in India
Sage Publications, 2007
pp. 268, Price Rs. 360/-

Alternative schools generally have one or more of the following features