When we think of salt water habitats or ecosystems, it is the sea or the ocean that comes to mind. But present close to these large marine habitats, associated especially with estuarine areas, is a habitat that is yet to gain prominence or get attention as have other habitats. These are the naturally occurring salt marshes and the artificially created salt pans where salt is produced. It is not merely the seas and oceans that are the source for salt marshes and pans. Inland sources such as salt lakes also contribute to the creation of this kind of habitat. This article explores the artificially created salt pan habitat, its characteristics, importance in sustaining biodiversity and the need to conserve them. 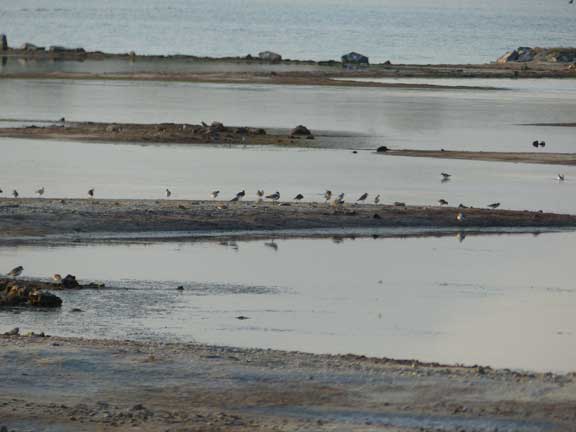 Salt pans are extensions of larger wetland complexes. Naturally occurring salt pans are also known as salt flats. These are natural formations, flat expanses of land where the soil is covered with salt and other minerals. Appearing white and shining under the sun such natural formations are generally seen in deserts or at places where there are underground deposits formed through evaporation of sea water millions of years ago, when such regions were a marine environment.

Artificial salt pans are created by humans close to seas, estuaries or salt lakes for the purpose of extracting salt. They are also found in relative proximity to urban dwellings. Known also as salt ponds, the design of these ponds or pans may vary but the common feature is that salt water is pumped into them, from which through solar evaporation salt is obtained. This sounds simple but is not. They are unique in many characteristics that are yet to be explored comprehensively or studied to understand the existence of biodiversity in them.

Natural or artificial, these pans are examples of dynamic ecosystems that are constantly subjected to perturbations in their environment. Rapid changes in water activity, especially the changes in the salinity, often stress the system. Oxygen concentrations are quite low in water that has high concentrations of sodium chloride and high ultraviolet radiations. How then does such an extremely harsh environment support biodiversity?

The salt pans do not sustain (flowering) plant life; however plant life – largely the scrub vegetation kind – may be seen in the land surrounding the salt pans. In some regions such as in Kutch, you may not see any vegetation for miles, just a white expanse or pans with water shimmering in the sun. The soil being saline, the kind of plants that can survive here are relatively few. The primary producers of energy within the pans thus are the microscopic algae. The nutrient rich seawater offers a favourable environment for algal blooms. A notable feature in this habitat is its biotic simplicity. The number of species in each trophic level is not very high. Studies have shown that the biological systems exist not only in harmony with the processes taking place in the pans but many are adapted to specifically thrive in them. The microorganisms thriving in the salt pans are described as haloalkaliphilic; meaning they are well adapted to the alkaline and saline conditions. They not only influence and assist salt production but also create niches for other organisms to thrive. The metabolism of microorganisms produce organic matter which is a source of energy for those at the next trophic level. The organic matter also ensures that the permeability at the bottom of the ponds is reduced thus minimizing salt loss especially when the water concentrations are low.

Have you ever noticed that the salt produced at some places has a red hue to it? It is very prominent in the salt that is produced in Rajasthan. The red colour is due to the presence of, among others Halobacerium and an algae called Dunaliella salina. The anit-oxidant activity of this microscopic algae creates large amounts of β-carotenoids adding nutritive value to the salt. The red colour also allows greater absorption of solar radiation and shields radiation reflection from the white salt bed. These microorganisms have a habit of forming mat like structures that influence salt production.

Feeding on these organisms or the organic matter are the zooplanktons – both micro and macrozooplanktons , the latter being mostly crustaceans or molluscs. Copepods and mysids may be seen in large numbers in salt pans as also small snails and clams. Many of them are detritus feeders. In terms of diversity, 21 species of copepods from the Bhayander slat pans and 18 species from Thane salt pans have been recorded by researchers. Similarly observations have been made for mysid populations at the Bhayander salt pans where researchers have found nearly 79 mysids/m3. The salt pans also serve as nurseries for fish to raise their young. Mysids are a source of energy for them in these nurseries.

The most spectacular diversity visible in these salt pans is that of avian fauna. With a variety of planktonic and fish life in them, salt pans are a welcome haven for migratory birds on long journeys. These pans are both a resting and feeding place for these weary travellers on wings. Whereas many birds arrive at the pans during the annual winter migration, several are residents who have made these salt pans their permanent homes. In India, birds such as the black-winged stilt, the greater flamingos, cormorants, painted storks, etc., may be seen throughout the year. The crustaceans, insect larvae, small snails, fish as well as the organic matter are food for these birds. The composition of salt pans change as the water evaporates and salt accumulates. The pans then are a muddy area and the composition of biota changes. When the slush is removed and the pans are inundated with fresh seawater, the composition of biotic community undergoes a change again. Hence, one can notice different kinds of birds using these salt pans as feeding areas at different times.

As many as 93 species of birds were observed during a study at the gogte salt plant in the suburbs of Mumbai. This is an example of species not the total number of birds. The most spectacular bird in any salt pan is the flamingo. These birds attract human beings like fleas. Salt pans promote tourism, especially bird tourism.

Salt from lakes
Salt pans are constructed next to lakes too. There are six salt water lakes in India of which Sambhar Salt lake is the largest saline lake. The Pangong-tso from Ladakh, Pulicat lake from the south, and the Chilka lake from Orissa are examples of some of the well-known salt lakes. About 2,10,000 tonnes of salt produced annually in Rajasthan comes from the Sambhar lake. Based on the presence of microorganisms, the salt water in the pans may even be green, orange, pink purple or red.

Activity for the history classroom
Biodiversity and conservation are issues that should not be restricted to a biology or environment science classroom. History classes have an important role to promote conservation. Here are a few questions that can become the starting point for a project on cultural and biological significance of the salt pans of Rajasthan.

The name Sambhar evolved from the presiding deity of that area, Shakambhari. Lakes are generally fresh water bodies. How did this one become a salt water lake? What does history tell you?

The sambhar lake is a Ramsar site. It is also a popular tourist spot. What steps would you take to conserve the habitat and its biodiversity?

In 2019, 20,000 birds were mysteriously found dead in the lake area. Explore to find out how and why this happened? What steps can be taken to prevent this from happening again.

Conservation
It is not just natural habitats, even human-made habitats are under threat. Salt pans are among the most misunderstood ones that are often earmarked for alternate land use. Anthropogenic activities are the most serious threats. Real estate industry always eyes salt pans for their urban complexes. Till recently, the salt pans around Manakudy estuary in Kanyakumari were assigned to build an airport. Salt pans which attracted birds in thousands, where greater flamingos were permanent residents, were in danger of being destroyed. Strong public protests backed by some excellent data from the forest department saved this bird habitat.

Salt pans are not only home to thousands of birds but a thriving industry for humans producing a nutrient most essential for human sustenance. For once, this human-made habitat has, instead of destroying, become a place for biodiversity to flourish. It is not merely the birds that are found in them. Salt pans are home to haloalkalophilic microorganism which secrete very unique enzymes that are active and stable in both alkaline and saline conditions. Thus, the proteases, amylases or cellulases produced by them are excellent for the production of laundry detergents. It is believed that the metabolic pathway of these haloalkaophiles can be used for biodegradation of toxic pollutants in waste water treatments or even in the biofuel industry. The microalgae Dunaliella salina with its antioxidant properties and the ability to secrete large amounts of carotenoids is seen as a candidate for dietary supplements.

Naturally occurring salt marshes trap sediments, acting like a buffer against harsh waves, thereby protecting shorelines from erosion. They minimize flooding by absorbing rainwater, act like a filter to keep back sediments so that the runoff water is cleaner. The microorganisms present metabolise the nutrients, reducing the mineral concentration, improving further the quality of water.

There are new species of microorganisms that are being discovered from this habitat. What benefits they can bestow to a world where environment degradation is bringing on newer and unknown issues will remain unknown if such unique habitats are not conserved.