Whenever we meet someone or take leave of an individual, we invariably wish them. In formal contexts, the greetings that we normally use are ‘hello’ and ‘good bye’. (Remember the line from the Beatles’ song? ‘You say goodbye and I say hello’.) In most informal contexts, however, these are replaced by ‘hi’ and ‘bye’. There was a time when the use of these two expressions was restricted to the younger generation, but now their use is more widespread – even the oldies use them with gay abandon! Not a day goes by when we don’t use either of the two words. For many educated Indians, sadly, ‘hi’ and ‘bye’ come much more naturally than our very own desi ‘namaste’! 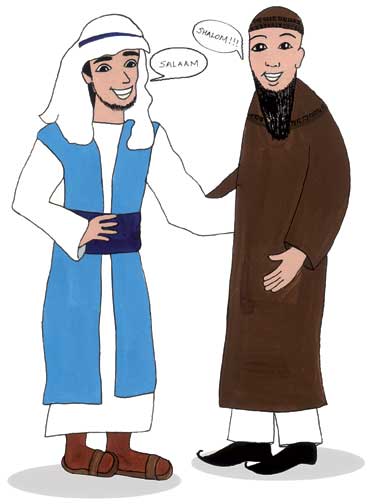 Have you ever wondered where the two words ‘hi’ and ‘bye’ come from? As you have probably figured out by now, man is basically a lazy animal; whenever possible, he tries to shorten things. Take the case of names, for example. Anuradha is often reduced to Anu, Balagopal becomes Bala or Balu, and sometimes, even a short name like Usha is reduced to ‘Ush’. If you are wondering what the connection between ‘hi’ and the various names is… well, I’m coming to that. As Bart Simpson would say, ‘Cool your jets!’ Don’t have a cow as yet!

In the old days, when people ran into each other, ‘How are you?’ was the standard greeting used. Though the utterance (and the response) was entirely predictable, people went through the ritual of saying it. Nothing much has changed since those days, for even today we all resort to certain formulaic expressions when we meet people. When we enter our school/college and see our colleague, how do we normally greet him/her? We usually say ‘Good morning’. We don’t always say these words very distinctly; sometimes, we just mumble them. Very often, we swallow the ‘good’ and produce a garbled version of ‘morning’. No matter how we say the greeting, the other person always seems to figure out what it is that we have said because he/she responds with a ‘good morning’ too – at least something that closely resembles it! Since in the old days, ‘How are you’ was the predictable greeting, very often, it was said quickly and sometimes, indistinctly. When this greeting was said very fast, it sounded like ‘hiya’. Soon ‘hiya’ replaced the longer ‘How are you?’; and with the passage of time, ‘hiya’ was shortened to ‘hi’. When you greet someone, ‘Hi, how are you?’ you are like a character straight out of a Wodehouse novel because what you are actually saying is, ‘How are you? How are you?’ It’s interesting to note that the laziness that is ingrained in all of us is often a strong force in changing language too.

Just as people had a ritual when they met each other, they also had a standard expression which they employed when they took leave of each other. This expression was ‘God be with you’. When this was said quickly it became… no, it didn’t become ‘bye’, but ‘goodbye’. Some people thought that ‘goodbye’ was too long, and reduced it to ‘bye’.

Another expression that is commonly heard in informal contexts when people take leave of each other is ‘so long’. According to scholars, ‘so long’ was first used in the U.S, and then later spread to different parts of the world. Where does this expression come from? Is it also an example of a longer greeting being reduced to two words? Not really. ‘So long’ is actually an example of what happens when you try to interpret what a speaker of another language is saying. ‘So long’ is actually from the Yiddish ‘shalom’ meaning ‘peace’. I understand that many Jews settled in New York, and when they took leave of each other, they said ‘shalom’. Native speakers of English who frequently heard this exchange taking place thought that the Jews were saying ‘so long’. As a result, they began to use the expression ‘so long’ to mean ‘good bye’. Other scholars have argued that it is not from the Jews that we get the expression, but from the Arabs. They believe that ‘so long’ is actually a corruption of ‘salaam’! This should make Indian parents happy; at least our kids are saying ‘salaam’ every day without their being aware of it. Now, if we could only find a way of making them say ‘namaste’!