Several decades ago, not much ink was spent on proclaiming the arrival of the impending New Year; it failed to create the kind of hoopla that is associated with the event today. Like Jeeves, the immortal character created by PG Wodehouse, the day ‘glided’ or ‘floated’ in imperceptibly and left without leaving a trace. For those of us who lived in the dark ages – pre-television days – January 1 usually came and went without a whimper. One went to bed at the usual hour on December 31 and woke up bushy tailed and bright eyed the following morning, and wished everyone a happy new year with enthusiasm – a far cry from the bleary eyed, dishevelled, hung over individuals of today who would have to consider themselves distinctly lucky if some blind cat did drag them in! 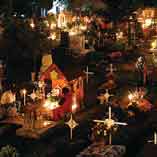 Things have changed dramatically since my childhood days; for now, people take pride in painting the town red on New Year’s eve by aping some of the customs traditionally followed in western countries – many drink like a fish, eat like a pig, dance like wannabe Michael Jacksons, and spend most of the following day throwing up or recovering from an unbelievable hangover. While these are the activities that we associate with December 31, thanks to the plethora of Hollywood films that have celebrated the event, there are other, perhaps more interesting ways of ushering in the New Year which we could consider adopting. People in Mexico and many countries in South America seem to be great fans of director Night Shyamalan, for they spend their time in the graveyard trying to communicate with dead people! Whether like the boy in the film ‘Sixth Sense’, they can ‘see dead people’, I’m not sure, but they do make an attempt to get in touch with them. Mexicans believe the end of the year is the best time to get in touch with their ancestors, and many do so in order to convey a message or get some advice from them. In Chile, the celebration is taken one step further. In the city of Talca, for example, the Mayor officially throws the graveyard open to the public around eleven in the evening, and for the next few hours, people are allowed to party with the departed. They eat, drink, and dance to music.

Eating is something that everyone enjoys doing on New Year’s eve/day. In some countries, they are very particular about what they eat as the clock strikes twelve. People in Spain and Portugal consume twelve grapes believing that they will bring them luck for the coming twelve months. The Japanese, on the other hand, invariably eat special noodles, and at the stroke of midnight stop all chatter and listen to the chimes of the temple bell. In order to remove the 108 sins or evil passions that supposedly plague every individual, the temple bell is rung 108 times. 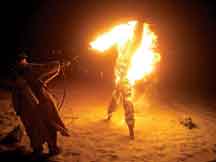 Other countries choose to drive away the evil spirits in a different manner. In Germany and Austria, people chase them away by making a lot of noise – bursting crackers and blowing trumpets loudly from church tops. In Ecuador, every family makes a scarecrow, and at midnight they burn it in front of their house in the belief that it will drive away bad luck. In countries like Hungary and Austria, effigies are made representing the misfortunes of the previous year, and they are burnt. In the Netherlands, on the other hand, it’s the week-old Christmas tree that is burnt to ward off evil spirits.

In the Philippines, people don’t welcome the New Year by burning anything; they bid hello to it by wearing an item of clothing that has polka dots on it. Most of the items of food they prepare on this day are also mostly round in shape. Since coins are always round, the Filipinos believe that wearing such clothes and eating such food will bring them prosperity. South Americans too believe that what you wear determines the kind of luck you are going to have during the coming year. People in Brazil and Bolivia, for example, wear colourful innerwear to usher in the New Year – bright red, green and yellow are some of the popular colours worn on this day. Red underwear suggests that the wearer is looking for love, while yellow indicates that the person is looking for wealth. The Irish too believe that the New Year could be the start of a truly beautiful relationship. Ladies hoping to find the man of their dreams, place a mistletoe under their pillow for luck. 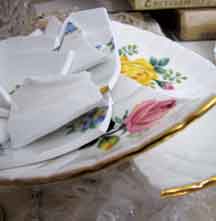 The Danes use the occasion to determine who the most popular person in the neighbourhood is. On the eve of December 31, people walk around with breakable crockery. When they come to a person’s house they like, they break a plate or cup by throwing it at the door. Nobody really minds this for the person who has the most broken plates and cups and saucers is deemed to be the most popular person on the block.

I guess in the Indian context, we could say that the person in front of whose house everyone leaves their trash is the most popular person in the neighbourhood!