Dreams of social change, for an octogenarian, may appear as irrational fancies. However, they are real opportunities for you youngsters to generate positive social change,” says 80-year-old Ramchandra Inamdar, a teacher, artist, change-maker, child…

Popularly and fondly known as “Inamdar Sir”, he is “Ram Kaka” for me; he is my granduncle and my grandfather’s younger brother. A former art teacher at Bal Mohan Vidyamandir, he is an alumnus of the JJ school of Arts and the only member in our family to have studied art formally. 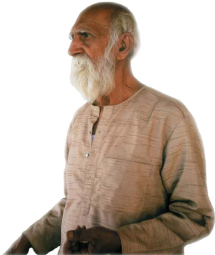 What greeted me as I approached his house in the village of Nilja, a few kilometers off Kalyan, was a name plate that read “Maitree Shaala”. This is Ram Kaka’s home, workspace, school, dream, struggle and his priceless patch of sunshine which he strives to spread so that children of all ages from nearby villages can come and bask in its warmth and shine on! The school, which is an extended portion behind Ram kaka’s house, only has four brick walls with a tin roof for the ceiling. However, in spirit and purpose, it is a platform for raising awareness, fostering positive learning, breaking shackles of blind faith and exploring means to live purposefully. What is most heartening about the structure is the welcoming rangoli pattern around the steps. That a place is tended to and cared for shows through many small things, a welcoming rangoli pattern associated with joy and mangalya being one.

Just like his school, the doors of Ram Kaka’s house are without locks or bolts beyond the standard kadee! He claims there aren’t any valuables he is afraid of losing. But for me his house is full of rare gems and precious treasures such as intricate paintings reflecting hours of labor, hurried yet meaningful sketches, mere paint daubs, portraits, landscapes abounding in every corner of the room, some hanging on walls and some tucked under the mattresses of the two beds in the house. All his art is unconditionally created on handmade paper, cardboard boxes, and “re-imagined”(recycled) paper. There is art in the form of graffiti on walls darkened by candle flames lit during long power cuts as well. I wonder how many hidden treasures I may find if I were to raid the mysterious loft covered with cobwebs and grime!

In this crammed, dusty house inhabited by two beautiful people, Ram Kaka and his wife, is a constant trickle of toddlers, young eager minds, motivated teenagers and a few open-minded adults. The house is rich beyond measure in its openness and dreams!

Ram Kaka engages with the children through painting, storytelling and theater. He occasionally invites experts from the city to talk on topics of health and hygiene especially health of adolescent girls. These talks, sometimes guided by experts and sometimes by the young boys and girls themselves, are fondly referred to as “Cha ma cha”, an acronym for “Chalaa Maroo Chaar Gappa”! (Let’s talk, in short!). At age 80, Ram Kaka is excited about launching a book of poetry he has written and compiled especially for children.

He believes every moment is a moment to start something new. And I say I need to pull my socks up!

The author is a trainer/facilitator with Railway Children, a UK based NGO. She engages creatively with street children and the staff of organizations across the country to ensure the staff’s improved and increasing psychosocial support towards street children. She can be reached at [email protected].