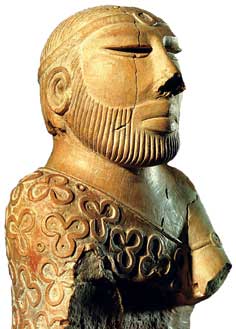 About 1500 BCE, hordes of semi-barbarian, Sanskrit-speaking nomads called “Aryans” poured from Central Asia into north-west India. There, they came upon the flourishing Indus or Harappan civilisation, whose inhabitants were “Dravidians,” destroyed it and drove the Dravidians southward. Softer versions now propose that the Aryans arrived after the decline of the Indus cities. But either way, they swept across the Indus plains, composed the Vedas over a few centuries, spread Sanskrit and their caste system over India, and built the mighty Ganges civilisation.

That, in a nutshell, is what most “educated” Indians know of their distant past, and is still today presented in most history textbooks as solid knowledge. Yet, the Aryan Invasion theory (or AIT) rests on no evidence. Before we come to that, it is instructive to see briefly how this theory came to be so widely accepted.

The birth of a myth
AIT was propounded in the nineteenth century by European scholars – notably F. Max Müller – as a convenient way to explain deep similarities between Sanskrit and Greek or Latin, which pointed to an ancient link between those languages. But with the British Empire at the height of its glory and Europe as a whole basking in her new-found Enlightenment, those proud scholars could hardly accept that they owed their languages to a benighted India. AIT, on the other hand, allowed India’s new British masters to see themselves as “one more Aryan wave” destined to bring about a “reunion of the great Aryan family” and to bring once more true civilisation to this land. AIT also became a convenient weapon in the colonial arsenal, since it divided Indians into high caste (supposed descendants of the Aryans) and low caste or tribal (supposed descendants of India’s original inhabitants), and also between North and South Indians.

Michel Danino, born in France, has lived in India for 30 years and authored several books on Indian culture and ancient history. One of them, The Invasion That Never Was, was adapted for school and college students in a special edition to be used as non-detailed material which can be obtained from the author, who can be contacted at [email protected].