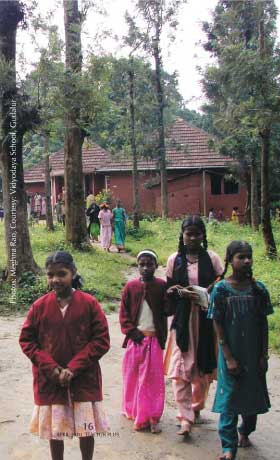 Last week we received a notice from the National Institute of Open schooling’s Open Basic Education department informing us that we should not enroll children below 14 years of age. The notice went on to say that according to the Right to Education Act all children below 14 years of age should be admitted in formal schools. Ours is an adivasi study centre registered under the NIOS-OBE scheme. We have 100 adivasi children, all of who refuse to go to the government schools near their village where they are entitled to food three times a day, clothes, residential facility, books, stationery, and the toiletries that they need. They travel 16 kms everyday one way to get to our centre. We provide them with education and nothing else except subsidized books, no food, no clothes, no stationery. Yet they come.

We keep track of 2862 adivasi children who go mostly to government schools in the Gudalur Block. We try very hard to ensure that they go to school, at least till the primary level. We have been conducting tests for them to check their levels at the class 3, 4 and 5 levels to give parents and teachers a feedback. The table below shows how 343 children fared at these tests conducted in November 2009:

Given this pathetic situation we find that there is a dropout rate of 4% at the primary level, 19% between classes 6 and 8, and 50% at the high school level. So, barely 25% of those who enroll at the class 1 level get to class 10! If at the primary level the child’s foundation is so weak she cannot survive at higher levels.

Ironically, it is to such a system that we must now recommend our students from the next academic year, thanks to the Right to Education Act!

This does not appear to be just our problem but a general one across the country. Even in West Bengal according to the article in Teacher Plus (February 2010 issue) `What a clean toilet can do”, out of 1.04 crore children who enroll in class 1, only 14.05 lakh make it to secondary school – a shocking 90% drop out!

I also want to refer to an article in the `The Hindu’, February 11th 2010, `Tangible Targets at School’ where according to the EPA Global Monitoring Report (UNESCO) the Education Development Index, placed India at 105 out of 128 countries in the year 2001. The EDI Report for 2010 now places India at exactly the same position-105 – out of 128 countries! This is after 10 years of World Bank funded DPEP and 10 years of Sarva Siksha Abhiyan (SSA) and over Rs.20,000 crores down the drain. The data states that while the enrollment is 94%, the dropout rate at the primary level is a shocking 34%! “In all probability they drop out without acquiring any level of progress with respect to the basic three R’s, contributing to the numbers of out-of-school children, to child labour and to the mass of illiterate population.”

The DPEP has failed, the SSA has failed. The education system stands like an unassailable monolith, immune to change. For 60 years, year after year, plan after plan, programme after programme, this system has refused to change its ways and provide basic literacy to the mass of the population. If anything, it has taken it away from the reach of the poor, the marginalized, the dalits and the scheduled tribes. It has privatized education, made it a business, squeezed the little money the poor have out of them with false hopes and now has the last laugh. Everyone knows that only the really poor and helpless will send their children to government schools. Every government school teacher knows that his school is unfit for his own children’s education and so sends them to private schools. Nowhere else is this distinction so distinct as in the education system where the poor are given second rate education. It is to this very same system we are now assigning the new role of implementing the right to education, well, maybe they mean the right to second rate education. 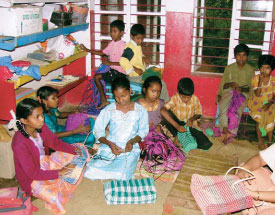 My question is whether the Act that is being mooted with so much fanfare actually addressed the problems faced by the mass of the marginalized communities in the country? How much thought has gone into it to address the problems of making the classroom a place where children will want to go? Will the state’s enforcement machinery whatever they think up, be able to ensure that children will go to school where the Abhiyan of the SSA failed? Has anyone asked what the root of the problem is and whether this Act will address this? Have there not been stricter acts like the SC/ST Atrocities Act where not a single conviction has been made in the all these years in the state of Tamil Nadu in spite of so many violations?

Irrespective of the marginalized communities, the present education system does not address the requirements of any quality of education. All leaders of industry are complaining of the poor quality of students that they get out of the university. All of them have to invest again in preparing them to suit their needs. We know that the present education system is not meaningful to the child or to the community, but at least if the little they are taught is taught well then one has some satisfaction. But, even that is not done.

The Right to Education Act – a complete misnomer (should be Compulsory Schooling Act) – affects all those who take education seriously. A large number of alternative schools and home schoolers who have opted out to make the lives of their children meaningful are now at the mercy of the state.

Alternative educational initiatives and home schoolers have called for a meeting on the 18th of April in Bangalore to address this issue and chalk out what action can be initiated in the coming months. All those who are interested are welcome.

The author is associated with Vidyodaya School, Gudalur. He can be reached at [email protected]