The first semester examinations were over and the second semester was due to begin. On the very first day of the second semester, we, as course coordinators, met with the students. We asked them to share their experiences of the first semester B.Ed. and B.Ed.-M.Ed. (Integrated) course. As usual, they appreciated the department and spoke in favour of the courses they had opted for. Although most of them had something positive to say about the department, there seemed to be an unspoken discomfort among them. After sometime, one student shared her frustration. The class was restless because for the previous semester, they just had to complete assignments and make presentations.

These views and experiences of the students led us to introspect our efforts as teacher educators. Can lofty readings and assignments immerse a person into the profession of teaching? Can this be the only way of introducing education as a discipline and methodology of teaching for preparing a ‘constructivist teacher’? How can we ignite young minds with novel and creative ideas? 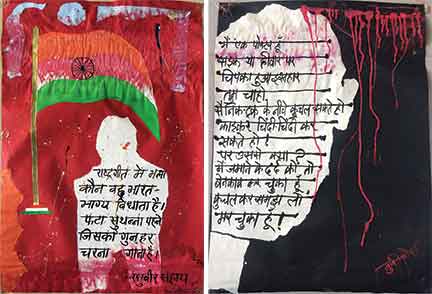 This was the vantage point. We started thinking about what we could do to expose our learners to a different flavour of learning. Instead of dictating our students to a pre-defined solution, we invited them to suggest a way out of the problem. After all, our problem posers were pre-service teachers. These pre-service teachers expressed different views. These views unfolded their beliefs about the teaching-learning processes. One of the students said that she wanted to do something childlike. If I quote her verbatim: “Hum bacchon ki tarah khush ho saken”. It indicated their belief about adult/child binary where a child-like curiosity and enthusiasm stands for joy and happiness. Similarly, they wanted to do something beyond lecturing, reading and writing (“jisme likhna padhna na ho”). It demanded a pedagogic avenue that could break the boredom of regular classroom processes. They were also assimilating their roles as teachers; therefore they asked for a learning experience that could be useful for their internship program. It was evident that these pragmatic concerns were also behind the decision-making process but it was driven by a zeal to do something new and different. Most of the students were fluent in Hindi. Keeping this in mind, we decided to organize a workshop on the theme ‘Trans-creating Hindi poetry through posters’. The workshop was intended to combine two types of areas of interest: poetry and drawing. As evident from the theme it was aimed at enabling the learners to trans-create Hindi poems in the form of posters. We requested Megha Aachrya, an artist and researcher who is working on ‘Trans-creation of Meera’s poetry through drawings’ to be the resource person of the workshop. She agreed and helped us manage the necessary resources such as colours, posters, etc. The students were asked to bring to the class a poem of their interest. The poems could be their own as well. A cursory review of the selected poems showed that most of them were related to gender, social discrimination, individual quest, etc. Thus, at the beginning we came to know about the concerns and interests of our students that pervaded their social and cultural ecology and also their thinking process.

Megha and her colleagues demonstrated different ways of making posters. She discussed how to choose images, colour combinations, effects, shadows, etc. The class was divided into groups of four. Each student had brought at least one poem. Thus each group had four poems. They had to discuss each of the poems and make the posters individually. Every student was supported and helped by Megha and her team. Some of the examples are shown here. The workshop broke the silence between the students and the teacher, even among students. The activity revolved around the sharing of ideas and viewpoints. It was observed that students were not only reading and reflecting upon the poems but they were also arguing about image selection, i.e., which image will go with which line? Was there any alternative image? Was the image depicting the content? Did the poster communicate the essence to viewers? We spent two full days for the workshop. It revealed the creative talents of many of the students. Students from science and commerce backgrounds also wrote poems and trans-created them into posters. A total of 52 posters were ready by the end of the workshop. They were displayed at an exhibition at the University.

The workshop showed that young adults also need learner-centric, non-conventional classroom experiences beyond the list of readings, lectures and assignments. We exercised participatory democracy, where the class decided to engage itself in a workshop. The content, method and execution of the workshop provided both a meta-cognitive engagement to the learners and a pedagogic space where inter-mental and intra-mental processes took place in a socio-cultural milieu. It also enabled the learners to know how to organize a workshop as a fruitful learning activity. It led the learners on a journey with the self where they expressed their world view with the help of poems and pictures. We, as a community of learners, learnt to appreciate each other and to celebrate the uniqueness of presentation of the same ideas, thus many a time we tried to put ourselves in others’ shoes. We didn’t do any transformatory task but a micro experiment to enjoy the weekend together. It nurtured a feeling of togetherness, with cherished moments of smiles as well as frowns. We are thankful to our students for being a part of our experiential world and involving us in theirs.

The authors are Assistant Professors at the Department of Education, Mahatma Gandhi Antarrashtriy Hindi Vishwavidyalaya, Wardha. They can be reached at [email protected].