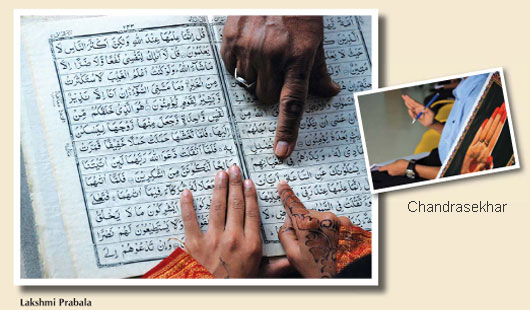 The Teacher Plus Photography Contest drew an overwhelming response, with more than 100 entries flooding our mailbox. The contest, open to all amateur photographers and held for the first time in the history of Teacher Plus, had respondents from all over the country.

Congratulations to all those who participated and who made this a truly satisfying experience for all of us at Teacher Plus.

The contest was announced in September 2009 and participants were given a time-frame of nearly four months to decide on their subject. Though the initial response was slow, as the deadline drew nearer, the pace quickened and by December, Teacher Plus received entries that left the staff amazed.

All good photographs stir up emotions and tell stories. From Archana Murthy’s creative ‘Envisioning the Future’ to Sunita Pijwala’s dramatic picture of school children in a flooded classroom, to Rashmi Virendra’s gentle visual of children trying to draw a picture of a dog – all caught our attention. There were many others too, which deserve a special mention: Amit Kohli, Mahesh Kumar Basedia, Bharat Thakur, Roma and others.

The two judges, PV Sivakumar, Staff Photograher, The Hindu, and Sadhana Ramchander, writer and editor, both based in Hyderabad, found the evaluation process difficult because they had to choose between a technically good picture and a picture that just could not be ignored. As they say, a picture is worth more than a thousand words.

All entries will be part of the Teacher Plus photo bank, and if published in the magazine, will receive credit and payment.

Prize winners will be intimated directly through email and telephone and their cash award will be sent to them in the form of a Demand Draft. 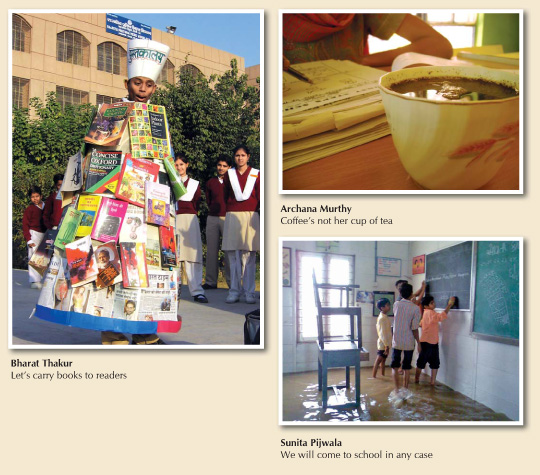 Evaluating the Teacher Plus photo contest

Evaluating creativity is a difficult and subjective process. The exercise to pick 10 photos from the ones submitted for the Teacher Plus Photography contest left me feeling dissatisfied because there were many, apart from the 10 I finally picked, which were good too. There was a conflict between choosing a technically good photo vis-a-vis a dramatic visual that did not score on sharpness or composition. I tried to choose ones that combined both these qualities, except one (children in a classroom filled with water) that was so dramatic, that technicalities did not matter.

The world of children in school is full of activity, learning and hope, and therefore, visually very interesting. Now that photography is so easy, I think all teachers should use their digital or phone cameras regularly, not only to capture candid shots, but also to use the photographs they take as part of their teaching process to better illustrate what they teach. The possibilities are immense. A picture is truly worth a thousand words. Maybe more.

Too good to be ignored

MY IMPRESSIONS: Some pictures were great, showing creativity such as the one by Archana Murthy, some were too good to be ignored and hence had to be clubbed. Others were too obvious and several others routinely taken.

A good photograph is judged partly by the concept which it embodies, the revelation of the photographer’s point of view and partly the skill employed in the language of the final product – colour, light and shade, value, imagination and atmosphere. If any picture includes all these to the fullest degree (in comparison to other entries) it would be the prize winning photo in a given contest. Each picture is judged by its merits like how far the photographer set out on the theme and how much was accomplished.

Having said that it would be apt to give a few tips:
Each photo contest has special requirements about the pictures expected from participants. Before you start setting up your shot, make sure you are following the rules to the letter.

Use the rule of thirds
Placing your subject in the centre of the shot makes for a boring, predictable photograph. Imagine a tic-tac-toe board over the shot, and place your main subject where the lines intersect. When the picture is off-centre, it will look more interesting.

Let the subject fill the shot
A beginner’s mistake is to take a picture from too far away, including too much irrelevant background. For example, when taking pictures of people you don’t need to get your subject’s full body in the shot, focus on the face.

Avoid pictures from above
Shots that look down on your subject tend to feel small and distorted. Get down on the level of your subject for a closer, more intimate look.

Watch your lighting
Shadows or the glare from overly bright lights can destroy an otherwise perfect picture. Try taking pictures early in the morning, just before sunset, or on a cloudy day. Use the flash on bright days to fill in shadows on faces or irregular surfaces.

Take lots of photographs
Don’t settle for a single shot, take dozens of pictures and select the best to submit to the contest. Try photographing the same subject from different angles, in different lighting, and at different times of the day.