Diversity is practically synonymous with India. From the towering Himalayas to coastal Kanyakumari. From the arid deserts of Rajasthan to the lush greenery of the Sunderbans, India houses an array of geographical features that form the context for the range of our cultures. Our country is home to a multitude of religions, languages, ethnicities, cuisines and customs. That differences are part of the fabric of our country has been ingrained into cultural psyches over aeons. Even though inimical forces have threatened to break the idea of a united India, time and again, our plurality has continued to thrive. Sadly, even in current times, socio-political pressures are trying to create fissures between Indians of various shades and stripes.

For most children, the classroom is one of the first places where they encounter diversity in its myriad forms. Thus, it is a great place for educators to model a truly open and embracing spirit so that children learn to appreciate the value of difference right from a young age. Furthermore, when children experience differences for themselves firsthand, they are less likely to be coloured by adult prejudices and can form a more inclusive and accepting worldview.

A classroom is a microcosm of the social universe. Apart from the fact that most children in a class are around the same age, there are abundant avenues to examine and explore diversity. In a typical classroom, you are likely to find children from a variety of religious and linguistic backgrounds. You are also going to encounter children with a panoply of physical, cognitive and socio-emotional abilities.

So, the teacher has a great base on which to model and build acceptance in its broadest sense. First, he must do away with assumptions that plague adult society. Just because most kids in your class speak tamil, do not assume that all kindergartners will have had exposure to the state language. Find out the backgrounds and mother tongues of all the children in your class. In a typical English-medium school, the teacher may use a mix of English and vernacular languages with children to ease them in. Likewise, in vernacular-medium schools, be sensitive to the fact that a child may speak a different language at home and may not be very conversant with the state language as yet.

Respect all religions by teaching children about them. Celebrate festivals of Sikhs, Muslims, Christians, Buddhists, Jains, Parsis and Hindus with equal fervour. Expose children to customs and cuisines of different cultures. You can invite parents to talk about various family traditions. Organize class parties where children get to eat food from other parts of the country. When children are thus exposed to differences within a positive framework, they are less likely to find the ‘other’ threatening. In fact, given how perceptive children can be, they might even appreciate the benefits that diversity brings.

Teachers may also be sensitive to learning differences in children and sensitize them to the fact that no two minds are really alike. Even though we may look alike, every person processes information slightly differently, and has unique talents and abilities. While schools tend to reward academic achievement, teachers may also recognize other talents like sports, music, dance, theatre, mimicry, cooking, etc.

Even though more schools are practicing the policy of ‘inclusion’ where children of different abilities study under one roof, kids with learning difficulties tend to struggle in most mainstream schools. Here again, schools can embrace difference and provide suitable accommodations to support the learning needs of children with difficulties. Every child should be made to feel that he or she is capable of learning.

Of course, being ‘inclusive’ doesn’t just stop with admitting kids with disabilities or supporting their learning. For a school to be truly inclusive, all children need to feel part of the institution. So, social inclusion, where kids feel befriended is an essential ingredient. Here again, a school can try and foster a nurturing climate where children are encouraged to reach out to those who are struggling in different ways. 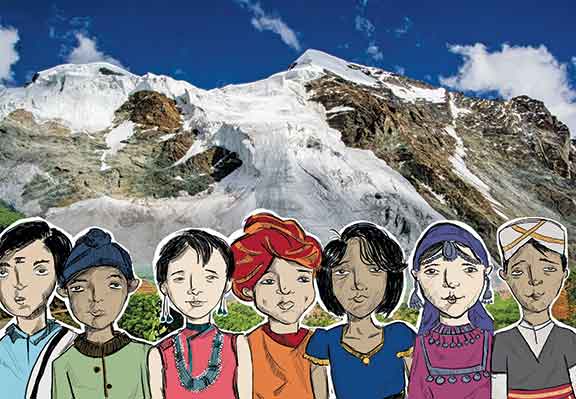 Despite the quota deemed by the Right to Education Act, most schools cater to children from similar socioeconomic backgrounds in our stratified society. But even so, there will be some degree of economic disparity between kids for them to realize that not everybody is born into privilege or the same level and kind of privilege. Furthermore, in a country like ours, where poverty rears its head almost ubiquitously, children need to know that millions are born into homes that lack the most basic needs. Even if a kid is growing up in a so-called posh neighbourhood, he just has to walk a few blocks to see families living in more depraved conditions. Here again, a teacher can help open children’s eyes and hearts so that they feel empathy for all kids, not just those who talk or dress or live like them.

Teachers may also show students how to respect differences of opinion, and how to disagree with others respectfully. This is indeed a valuable lesson for children to imbibe. Unlike debates on television and even parliament, which are often reduced to shrill shouting matches, teachers may instil listening and reasoning skills in children so that they learn to argue with each other in a civil and polite manner without resorting to vicious and vitriolic diatribes.

Besides creating a more harmonious, vibrant and empathetic society, are there other benefits to promoting openness? Do individuals also stand to gain when they are more accepting and open? The answer, according to social science researchers, is a resounding yes. In the August 2017 issue of Scientific American, psychologist Luke Smillie discusses the pluses of being open to experience. In general, people who are open are more curious and creative. For example, if you ask people to generate as many uses of a brick as they can, open people tend to come up with a greater number and more original responses. While less open people may think of standard uses like construction, more open ones suggest using bricks as a paperweight, a leg of a sofa or crushed, powdered and made into paint. Thus, open people are more likely to display divergent thinking, which is a hallmark of creativity.

In another study reported by Smillie, researchers found that those who were more open to experience showed less “inattentional blindness.” This refers to the phenomenon of people sometimes not noticing unexpected things when their attention is focused elsewhere. Everyone has limited attentional space, but open people’s perception, as the word suggests, is more open. Smillie and his colleagues have also found that open people tend to experience more complex or mixed emotions like nostalgia where a person simultaneously feels pleasure and pain.

Being in a motley group also enhances our decision-making abilities according to Professor Katherine Phillips of Columbia Business School. She argues in a 2014 article in Scientific American that when we are in a diverse group, we expect people to hold different viewpoints and that results in “better outcomes” when the group has to make joint decisions. In contrast, when people are in homogenous groups, they expect others to think like them and are less open to alternate perspectives.

Thus, being open and accepting has advantages for both individuals and society, at large. We are very fortunate to live in a heterogeneous culture. Instead of trying to homogenize students, schools may actively promote and celebrate diversity as everyone can only stand to gain from it. In today’s socio-political discourse, the terms ‘tolerant’ and ‘secular’ are often used synonymously. But as ‘tolerate’ implies “putting up with something we dislike to disagree with,” I suggest that we use the words ‘accepting’ and ‘open’ to truly signify a secular society.

The author is Director, PRAYATNA, Bengaluru and Chennai. She can be reached at [email protected].