In village communities, armies, religious organisations, schools, families and governments, punishment exists in some form or the other. It is almost taken for granted that without punishment, without the fear of punishment, the fragile order will be in tatters. However, there is also a disturbing perception – in villages where there were no police stations, there was no crime. When law enforcing machinery came, crime rose. Thus, orderly behaviour, respect for each other for the common good seems to suffer when the hand gets rough.

What do schools have to do with discipline, apart from introducing the young to various branches of knowledge? What does a school have to do with retribution, controlled behaviour, suffering punishment? On the face of it – nothing. Below the surface – everything. 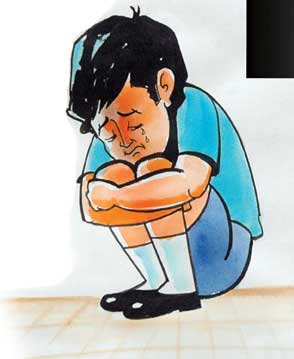 When a group of students are brought together under one roof, in one campus, often small, there is bound to be movement. Small children learn early the art of walking and gain access to speech. And through these simple rights seek belonging in the drama of life. Through curiosity and energetic exploration they stumble and fumble and discover many things – colour, texture, movement, play, pain and pleasure. They also quickly learn power, domination, stubbornness, fear and aggression. And from a young age, the journey becomes an interplay of the desirable and the undesirable.

Teachers and adults watch this engaging ancient drama with joy and horror and have to create a safe atmosphere for students, one with enough order to go on. How does one relate to a very dear person who lies? Or one who is drawn to another’s shiny toys? Or who laughs when another falls and is injured? Or one who disrupts the proceedings?

Usually we begin with the given – ‘This has to stop! How shall we do it?’ And it happens by speaking to the student, many times. We believe that telling someone something will have an effect, break a pattern, and things will change. This hope is naive, as much of human experience says that it does not work. People do not change easily, particularly behaviour. On the contrary, punishment, or fear seems to work. If one raises the stick, the horse or goat or cow will do what it is told to do. If fear is made to rise in human beings they may behave. ‘Spare the rod and spoil the child.’

Is the purpose of school or contact with adult to raise fear and learn behaviour under its cloud? How will responsible adults move further?

If a large number of people assemble anywhere, poor behaviour comes to light – in a class, in a stadium and in a rally. For the purpose of learning, do people need to gather together? Further, when a number of people of the same age get together, there is pressure to behave similarly. The need for proving oneself better than others manifests, competition sets in.

From time immemorial one man has suffered at the hands of another, and children have suffered a great deal. Our reactions of anger, outrage and violence are coded in our minds and possibly even the genes. We know that violence begets more violence. But few of us turn our faces away comprehensively from it.

If a school says we will not punish students, it seems a good beginning. But much more has to be learnt and understood. Each teacher must learn how to create, design situations where innate order can prevail. The community of teachers must learn practices and approaches that permit collaboration among students and not competition. Schools must explore structures that do not require a heavy hand for ordering.

At a deeper level schools must internalise their functions as seeding respect, dignity and inquiry in human society, not merely providing gateways to a piece of the luxury pie.

The writer is Principal of The School, Krishnamurti Foundation India, Chennai. He can be reached at [email protected].