The arrival of October is something that many Indians look forward to, for this is the month when the festivals of Dussera and Deepavali are usually celebrated with a lot of fanfare. For most school-going children and office-going adults, these festivals provide a well-deserved break from the monotony of school/office life. In places like West Bengal, Gujarat, and Rajasthan, work in all sectors – private and government – more or less grinds to a screeching halt during the ten-day celebration of Dussera. But this is much better than our non-functioning Parliament, where our ‘hardly working MPs’ ensure that no work ever gets done even when there is no festival.

Most of us have been told in school that the prefix ‘octo’ means ‘eight’. This probably explains why the Greeks chose to call the rather strange looking animal with eight tentacles, an ‘octopus’. The word comes from the Greek ‘oktopous’: ‘okto’ meaning ‘eight’ and ‘pous’ meaning ‘foot’. The Greeks saw this highly intelligent, but extremely shy creature as an entity with eight feet. For most comic-book buffs, however, the name ‘octopus’ immediately conjures up a very different image. It is that of the super villain, Dr. Octopus, in the Spiderman series. There are quite a few words that contain the prefix ‘octo’. People who are in their eighties are labelled ‘octogenarians’, while a word that consists of eight syllables is referred to as being ‘octosyllabic’. Based on this logic, ‘October’ should be the eighth and not the tenth month of the year. What we now call ‘October’ should be called ‘December’. This is what happens when you switch from one calendar to another and do not bother to change the names of the months.

While the Romans had no clue what to do in the month of October, the Germans, on the other hand, had the right idea. They referred to this month as ‘wein-mond’ meaning ‘wine month’; October was the month that grape was harvested and wine made. This was the month that they made and drank a lot of wine. Nowadays, of course, it is not wine that Germans associate with October, but beer. For it is during this month that the world famous Oktoberfest is celebrated in Munich, Germany. The event was first held on October 17, 1817 when the people of Munich were invited to celebrate the marriage of Prince Ludwig. With the passage of time, the sixteen-day gala event was moved to the second half of September, a time when Germany experienced its best weather. Today, the Oktoberfest is a major cultural event that attracts close to six million people every year from different parts of the globe. For most visitors, the different varieties of local beer is the main attraction; during the sixteen-day event, beer flows like water and visitors guzzle down close to seven million litres of the frothy liquid! The fair itself comes to a close on the first Sunday of October. If the Sunday happens to fall on 1st or 2nd October, then the celebration continues till October 3, – for on this day in 1990, Germans on either side of the infamous Berlin Wall tore it down and succeeded in reunifying a country.

For people who grew up listening to the radio, the month of October demonstrated to the world what a powerful medium it was. On October 29, 1938, the well-known movie director, Orson Welles, broadcast his adaptation of HG Wells’ classic ‘War of the Worlds’ – for the movie buffs among readers, the latest film version of this novel was released a couple of years ago starring Tom Cruise. The radio drama created quite a panic in the United States. People who did not tune in early and did not hear the announcement that what was to follow was a play, were under the impression that Martians had landed in New Jersey and were attacking residents of the state. Scared parents ran out of their homes with their children, got into their cars and drove – only to find a sea of cars ahead of them! All roads leading out of New Jersey were choked and telephones in the radio station broadcasting the programme were ringing off the hook. Order was restored and frayed tempers calmed when the producer of the programme interrupted the broadcast, went on air and informed his audience that they had been listening to a radio drama – that Martians had not landed on the shores of New Jersey! A few years later (1941), the producer of the play, Orson Welles, went on to produce and direct ‘Citizen Kane’ – which according to many movie pundits was one of the best films, if not the best film, made in the 20th century. 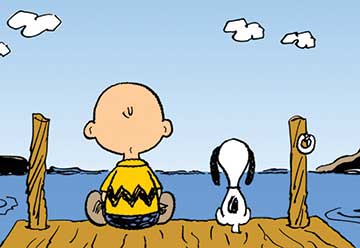 The month of October also saw the birth of characters who would become household names the world over. Charles Schulz’s cartoon strip ‘Peanuts’ made its debut on October 2, 1950, and for the next 50 years its quirky characters would become the topic of conversation at the breakfast table. Everyone saw a bit of themselves in the smart beagle, Snoopy, and the perennial loser, the ‘blockhead’ Charlie Brown. This was also the month when the ‘fab four’ – the Beatles – tasted their first major success – their song ‘Love, love me do’ rose to the top of the charts. For the next decade or so, they would reach ethereal heights that few humans have experienced.

Of course, not all the events that took place in the month of October make pleasant reading. Quite a few leaders who dominated the world stage were either assassinated or killed in this month. On October 16, 1793, Marie Antoinette, the queen who told the peasants in France to eat cake if they didn’t have bread, was beheaded. Sir Walter Raleigh met the same fate on October 29, 1618. Much closer to home, our former Prime Minister, Indira Gandhi, was assassinated by her own bodyguards on October 31, 1984. The world also saw many revolutions in October; regimes were overthrown and reigning kings, and sometimes ordinary mortals were compelled to hand over power. In my case, it happened on October 28, – I got married.