“Music is enough for lifetime, but a lifetime is not enough for music” 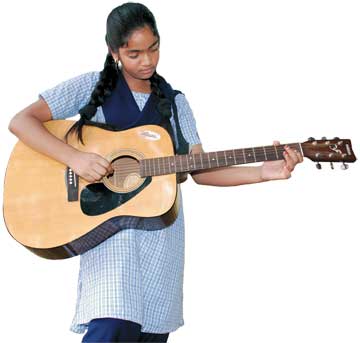 Music affects the way people function. It has an impact intellectually, morally, spiritually, and socially. As educationists, we need to prepare students mentally and physically so that they grow up to be balanced and productive members of society. While subjects such as maths or science are important, the extracurricular subjects too are important, especially music. Music should be promoted as an essential component of elementary and secondary education.

Are students who listen and sing smarter than others? This question aroused my curiosity to find out the impact of music on students. It is a known fact that music always plays an important role in bringing mind, body, and spirit closer. Through listening and performing, opportunities are created for students to cultivate a deeper understanding and concentration. Music improves one’s imagination and enables us to understand how composers have expressed their musical thoughts through the language of sound.

Research has proved that a knowledge of music has benefited children’s creativity, sensitivity, and also their cognitive abilities. Look back to the olden days when music became the base while working, harvesting, celebrating, teaching rhymes to kindergarten children, or reciting slokas in temples.

In our school, the importance of music is realized by every individual. Every student and teacher understands the value of music and enough exposure is given to the students to listen, perform, and compose. The children are given opportunities to participate in various programmes inside and outside the school.

We decided to make a comparative study of Western music and Indian music and also to test the impact of music on students’ achievements as a part of the International School Award (ISA) by the British Council in 2009-2010.

The main goal of the project was to integrate music education in school and impart Western and Indian music to the children and provide opportunities for enhancing students’ development and supporting their academics. A number of different activities were chalked out such as:

We were surprised that Western music was a great favorite among students. Learning Western music appealed to students since they found it attractive and entertaining and were drawn by its popularity. Other reasons cited by the students were the quality of the voices and singing, the melodies, the beats, rhythm, the uniqueness of the sounds and the energy in the music. Some students said that they liked the creativity in Western compositions and the way harmony was used in those musical compositions. 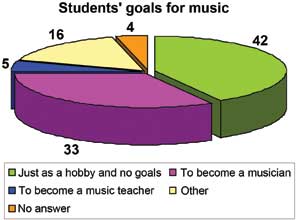 Some of our students took music very seriously and wanted to become musicians, whereas a majority expressed that learning music was their hobby.

Our students rated the importance of music very highly; 81% rated it as important or very important for the development of all young people. But, they felt that lack of time and the pressure of school and studies was often a barrier in spending time on music. It was interesting to note that about 30% of the students felt that their teachers’ support and encouragement helped them develop/nurture their musical interest. Ultimately, they expected their parents and school to encourage and nurture them in learning music. 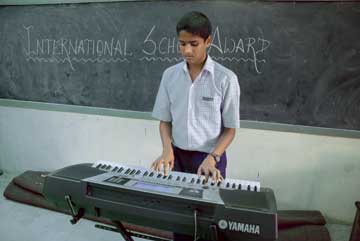 We were heartened to see that over 90% of the students believed that music could help change a person’s attitude and 60% reported that it had helped them gain many values. The diverse responses on students’ perceptions were very revealing. Some felt that learning music could bring about discipline in personal activities, help them be creative, have respect for others, learn to entertain, develop listening skills, bring inner satisfaction, develop devotion, desire for achievement, etc. Beyond these, our students also realized the benefits of learning music in their academics; 22% said that it helped improve memory, and 55% said that it helped them improve concentration. These statistics have confirmed that learning music indeed should be a part of a young person’s education. 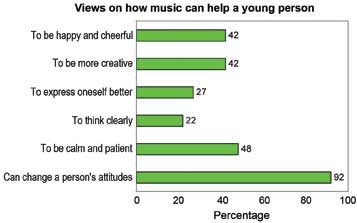 We found that music has considerable impact on our students. They experienced how music had made them calm, helped suppress their anger, enabled them to overcome defeat and disappointment, and helped them feel happy, and most of all brought harmony to their mind, body, and soul. More than anything, it reduced stress, anxiety, fear, and developed confidence and positive approach.

Our students also believed that there were many long-term benefits that came from learning music. It served as a means of refreshing themselves, relaxing the mind from the daily pressures and challenges, building their confidence, to be happy, balanced and cheerful and develop their creative skills and talent. Most of all students felt that learning music was going to be of life long value to them, as it would be the best medicine that will help them in challenging times. 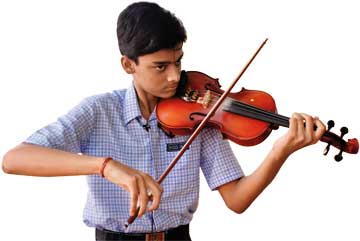 These findings have heightened our intent of integrating music into our school curriculum, as we are now sure that it will have long ranging consequences on our students. Documenting the evidence of this from our students was very helpful to plan and strengthen the program and ensure that we sustain our efforts.

We presented these findings and a short video documentary capturing our students’ voices and performances as part of the ISA and our school won the Best School Award.

We were encouraged by this and we continue to strive and provide our students with the opportunity for an education, one that includes music. Because Music is indeed the universal language of mankind and the voice of angels.

The author is Principal, The Hindu Senior Secondary School, Chennai. She teaches economics and marketing for senior secondary classes and social sciences for secondary classes. She also conducts workshops and seminars for teachers across the country. She can be reached at [email protected].

The power of music

“In today’s world, I see music as a unifying force. This world is full of enmity and we forget to think about love and unity. Hence music begins from nature itself, appealing to all irrespective of caste, color, creed, and nationality. We must learn and listen to it.”
Varsha Rajan, Xth standard

“Music plays an important role in our life and it exists in a number of styles, each representing a particular area. Clearly, music is not easy to define, but we can recognize it. I can also say that music is the best way to manage your psychology.”
R Akshayan, VIIIth standard

“The most important change that music can bring in one’s attitude and behaviour is that it inculcates in us dedication, will power, and most importantly, it gives us a message that you can achieve and excel, only if you pursue it.”
K Sailavnya, IXth standard

“Music has become very important these days because of the increasing tensions and busy routines in the present world. This has made man miss the beautiful moments given by nature, like the chirping of birds. Now we emphasize on music in our day-to-day life, to restore our lost peace of mind.”
Abhijit M Das, IXth standard

“I felt that music should be taken up as a subject by everyone. This would help everyone in moulding their personal lives as well as academic lives. I feel that having music as a co-curricular activity would surely ease the tension of exams and pressure by parents and teachers.”
R Kirthana, Xth standard