As educators and parents, most of us would like to see children grow out of the hand-holding phase and become independent thinkers and doers. However, the satisfaction we derive from seeing a child accomplish a task with little or no help is sometimes offset by the frustration we feel during the process of gaining independence. Leading a child toward independence is a careful balancing act where we see-saw between providing a gentle guiding hand and loosening (or letting go of) our grip on the leash. But in order to become a truly independent individual, a child must be able to think for herself, to be able to weigh options and make a considered choice unhindered by expectations or extrinsic reward/punishment.

‘Independence’ or ‘autonomy’ means ‘to govern oneself’. The opposite of autonomy is ‘heteronomy’, i.e., to be governed by someone else.

These terms can apply equally to politics (“India is independent”, “South Somalia is an autonomous region now”), social issues (“He acted independently without consulting the committee”) and intellectual questions (“You need to learn to think independently”).

Heteronomy implies blind obedience and conformity. The person is governed by other people or their opinions, rather than himself. Example: When I was about 10 years old, a new girl moved into our street. My best friend took a dislike to this girl and told me I must be mean to her. So one day I walked up to this girl on the street and hit her. An autonomous action would have been to admit that the new girl was not mean or nasty, to make up my own mind and to refuse to follow my friend’s instructions.

An autonomous/independent person thinks for himself (but not only about himself), decides himself what is right, and acts out of choice. (This choice may of course be to do what the teacher asks him to do!). He does not rely on others to tell him what to do, give him ideas, or tell him the answers.

All persons begin by being heteronomous – young children want to do what everyone else is doing, and copy each other, often mindlessly.

Teachers face a difficult dilemma – on the one hand they want to foster independence in children; on the other hand they need to maintain classroom order.

If behaviour rules are just imposed by the teacher, they remain external. Children can often be made to obey only when sanctions are imposed – i.e., either by giving rewards/incentives, or punishments. Both of these do not support autonomy. (The first makes children dependent on adult approval, the second makes children do something just because they don’t want the punishment. Neither are free acts.)

An autonomous/independent person acts not because of the reward or punishment, but because he freely chooses to co-operate.

How can we achieve this? 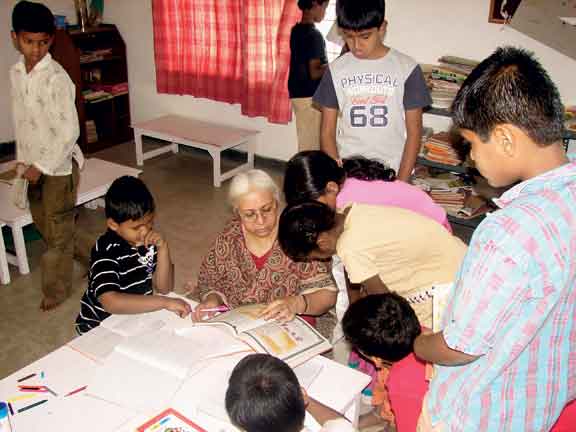 Note that even though the child in (3) has been made to sit alone, it is not seen so much as a punishment, but rather as a consequence (there is a difference) and as a chance to learn to improve behaviour. The difference is subtle, but these are the kinds of things that make the difference between co-operation and disobedience.

Power
Some educators argue that in order for the child to become independent, it is necessary for the teacher to reduce his own ‘power’ as much as possible. They see the teacher’s ‘power’ as ‘telling children what to do’ and being maintained by rewards and punishments. This is, I believe, a fundamental misunderstanding. The teacher’s ‘power’ comes not from the rules or punishments he imposes but from a deep centre within himself, and being calm, confident, knowing that he is in control. An experienced teacher whose class is attentive and well-behaved will hardly need to use rewards or punishments, and will not constantly give commands. He will speak quietly, but firmly. The children will co-operate without fear. They will be keen to do as he asks, out of respect. He is able to maintain his ‘power’, without totally ‘disempowering’ the child through simply giving commands. Thus in order for the child to become autonomous, it is not necessary or desirable for the teacher to reduce his own power. He can, nevertheless, at the same time encourage independent thought, action, and co-operation.

Children perceive reduced ‘power’ as a weakness and will quickly step into the gap and display their new-found ‘power’ over the teacher. (For example: speaking disrespectfully/being inattentive or disruptive in class/disobeying requests/shouting out answers/shoving their paper under the teacher’s nose/running off without tidying up after an activity/demanding attention/not staying on task but wandering off to do something else, etc.)

As Manju Gupta said in her article in Teacher Plus, ‘Classroom strategies and some rules’ (October 2008, Ask and Answer), “Always allow yourself the right to be in control without stifling the freedom, energy and creativity of the student.”

Independence is not something we teach in the same way we teach how to do sums in maths. Encouraging independence in children is an attitude that we need to carry with us all the time. Encouraging independence requires more patience and time from the teacher. But taking the quicker way out or trying to make things easy for the child (or oneself!) leads to children – and the adults they will become – who cannot think for themselves, innovate, or reach their own conclusions about issues.

A final example may illustrate what I mean. Some standard 5 children were making a scarecrow. They had stuffed the head bag too full, so were unable to pull the string tight to make a neck. I asked them to think about the problem and figure out what to do in order to solve it (remove some stuffing). They just stared at me passively. I repeated my request as many ways as I knew how, with pointing and gesticulation. The children did not look at the head, they just waited patiently for me to tell them what to do. Thinking that maybe they did not understand my somewhat basic Hindi, I asked the class teacher to explain. The teacher simply bent over, removed some stuffing, and pulled the string tight.

The author has taught English to school children in Austria and Ecuador, and to young adults in India. At present she is working as a volunteer in a small NGO – run primary school for rural children in the foothills of the Himalayas. She can be reached at [email protected].