English is a language that has never shied away from borrowing words from other languages. While our politicians with their tunnel vision have attempted to keep our languages pure – since they find it impossible to keep themselves or the members of their party ‘pure’ – English continues to be on overdrive when it comes to borrowing. Perhaps what is interesting is that many of the borrowed words have become such an integral part of the language that one forgets that the words are not English. Take for example, the word ‘bank’, a word that we use or hear being used almost every day. Did you know that it is not an English word and that its origins can be traced back to the Italian word ‘banca’? Any idea what the word ‘banca’ means? Well, let me give you a hint. If you went to school in the 1960s like I did, you probably sat on one all day. If your grey cells concluded that ‘banca’ is the Italian word for ‘bench’, then you were bang on. Good on you! 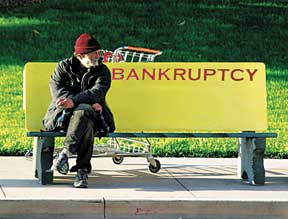 The question that arises is what is the connection between the humble bench and the modern bank? How did the bench give rise to the concept of a bank? Well, believe it or not, the first ‘banks’ were the ‘bancas’ or the benches. Several centuries ago, money lenders used to transact business sitting on a bench. The ‘banca’ was kept in a public place – usually in the courtyard of a temple – and it became the moneylender’s office. As long as this individual carried out his business in what was perceived to be a fair manner, then there was no problem. But if the clients believed that a banker was cheating them, they drove him out of business by ensuring that he didn’t have an office to work out of. How did they achieve this? The angry clients broke the moneylender’s ‘banca’. It is from this simple act of destroying a bench that we get the word ‘bankrupt’. ‘Rupt’ means ‘break’; the original meaning of ‘bankrupt’ therefore was ‘broken bench’. Since the poor man didn’t have an office to carry out his business from, he often went bankrupt. Nowadays when we are strapped for cash, we say, ‘I’m broke’. What you mean is that you are like the money lender whose bench has been broken!

Parents often encourage their children to save money. In order to inculcate this habit in them and to make the activity fun, they gift them a ‘piggy bank’. When you think about it, the pig is a strange choice for getting youngsters to hoard money. This noble animal which Lord Emsworth loved to spend time with is not renowned for its ability to plan for the future. Squirrels and foxes, yes, they store food for future use. They are the well-known ‘savers’ in the animal kingdom. The pig, on the other hand, is a glutton; it lives for the moment. It consumes everything that lies in its path and when its belly is full, the animal lets out a satisfied grunt and moves on. It makes no attempt to hide or store food for future use. So why do we use this animal to get our children to save? Doesn’t it make more sense to have a squirrel bank or a fox bank? Why did the English pick the pig? 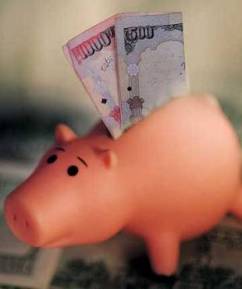 Believe it or not, the ‘pig’ in ‘piggy bank’ has nothing to do with the animal; it refers to the material used in the Middle Ages to make pots and pans. During the 15th century, metal was very expensive and seldom used for making utensils. Most dishes around this time were made of clay called ‘pygg’. Whenever a housewife managed to save some money, she used to store it in ‘pygg jars’ which she called ‘pygg bank’ – meaning ‘clay bank’. With the passage of time, the spelling of the clay material changed from ‘pygg’ to ‘pig’. This took place in the 18th century, and by the time the 19th century came along people had more or less forgotten that the ‘pig’ in ‘pig jar’ or ‘pig bank’ referred to the clay and not the animal. So much so that when potters were asked to make ‘piggy banks’, they produced them in the shape of a pig! The animal shaped bank became an instant hit with the children. Nowadays, we don’t find too many piggy banks made of clay. Porcelain and ceramic are the order of the day.

S Upendran teaches at the Central Institute of English and Foreign Languages, Hyderabad. He can be reached at [email protected].