A Story of Political Ideas for Young Readers, by Rustam Singh, is the first volume of a larger series of books that is an attempt to interest teenagers in the history of political thought. Volume One covers the core ideas of Socrates, Plato, Aristotle, and Machiavelli. The series is published by Eklavya publications.

Singh’s aim is to present the history of political thought in a manner that would capture a younger readership. The preface mentions some techniques Singh intended to use to make political theory accessible to younger readers. They include writing in a narrative (not descriptive) style, presenting the ideas in the various steps of their formation, instead of just their ultimate form, and explaining the context within which they developed. The methods that the author wants to use do indeed sound viable. Unfortunately, the book fails to do just that.

The first chapter starts promisingly with “We shall begin this story with Socrates and Plato.” Using the word ‘story’ definitely relaxes the defences of the young reader. It continues in this successful vein for a short while, and then slowly but surely slips into a seemingly unending narrative. And that’s where the use of technique number one ends. The writing fails to infuse any life into the narration and thus does not move beyond a mere description of the ideas. The material doesn’t engage the reader, or inspire the reader to think. None of the succeeding chapters begins in a fashion that engages the audience. 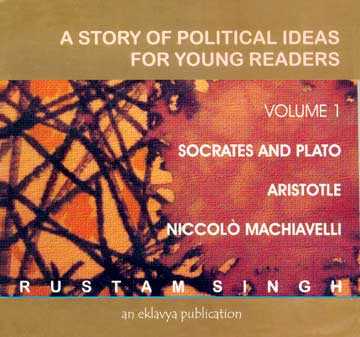 The other two strategies are actually employed quite successfully. The ideas are presented not in their final form, but as a continuous process of conception. Since this is the way the ideas were actually developed, to present it thus makes the ideas seem more sensible and relevant. This is especially true for the Socrates and Plato section of the book. This narrative style contrasts with textbooks in that the theories are not given as an ‘ultimate truth’ that ‘wise men’ miraculously arrived at. While doing so, Singh also highlights the social and political environment in which these ideas arose. This helps the reader appreciate the evolution of the ideas and theories. However, these techniques alone are not enough.

The main shortcoming of the book is its disconnect with the needs of the audience. Rustam Singh may know his political theory but he doesn’t seem to understand what interests a teenager. Right from how the book looks to what’s inside, there’s nothing that yells “pick me!” The colours and fonts chosen for the book cover are drab and predictable. The title sounds creepily similar to political science textbooks. And the questions that form the blurb would only elicit a “who cares?!” from any average teen.

Another fact that reveals the author’s lack of understanding of the teenage mind is confusing two categories of reader-levels. The book is written in a style appropriate for an age group of 10 to 14 years, while the content is more appropriate for 15 to 19 year old readers.

A Story of Political Ideas for Young Readers falls prey to the common error of authors, who in an attempt to simplify the text for younger audiences often lapse into substandard writing. The language lacks elegance and grace. There are even some technical writing errors. There is a much too frequent use of colloquial terms, sentences have confusing structure, and an over-zealous usage of pronouns exacerbates the problem.

Singh hasn’t set himself an easy task. Teenagers are not naturally interested in political thought, and there’s very little that matches the lure of fancy gadgets and the effortless entertainment provided by them. But what then, would do the trick? In my view, interest stems from relevance. So if the concepts to be discussed are chosen carefully and are presented in a manner that highlights their relevance in today’s world, the book would have a better chance of capturing the attention of the target audience. Sophie’s World by Jostein Gaarder is a good example of a book on the history of philosophy written in an engaging manner.

A Story of Political Ideas for Young Readers is a valiant attempt that just fails to hit the mark.

The author is working a research project at the Centre for Neural and Cognitive Studies, University of Hyderabad. She can be reached at [email protected].