The chemistry laboratory is the best place to help children develop rational thinking and a scientific temper. The myths surrounding magical feats performed by godmen can be shattered with a few experiments in the laboratory. 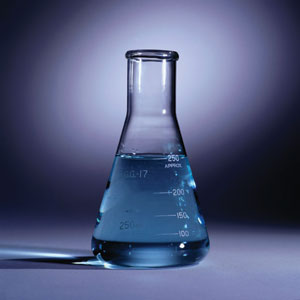 Someone once said, “If you think education is expensive, try ignorance. No amount of money spent on educating the people of India can be considered too much, considering the ever-increasing popularity of the miracle men.”

In a country that is largely religious, it is easy to find tantrik babas and miracle men at every street corner, especially at temple fairs during festivals. Walking on burning coal, eating fire, juggling fire balls, flogging themselves – these and many more feats beguile innocent people who tend to believe that these men are endowed with some super powers and because they are ‘pure and pious’ they remain unhurt by the fire and the whip. Soon enough there will be people prostrating to these godmen who then exploit their insecurities to make money. The sad part is that at least half the followers are likely to be “educated”.

Is it possible that you can condition your mind into overcoming some realities of science?

Superstitions and blind faith come about when the thinking is irrational and devoid of all logic. What passes for miracles in some feats is nothing but clever chemistry at work and these godmen are the best alchemists going around.

The chemistry laboratory is a good place to help children develop rational thinking and a scientific temper. Here are some experiments that bust the magical feat performed by god men. All the experiments can be done in the laboratory. Scientists at the Indian Institute of Chemical Technology (IICT), Hyderabad, conduct special camps to increase scientific awareness in children. Prof. Subramniam Ranganathan, retired Professor, IICT, suggests these myth-busting experiments in the chemistry labs to instill scientific thinking in children.

“No supernatural powers are required, only some caution and commonsense,” he says. 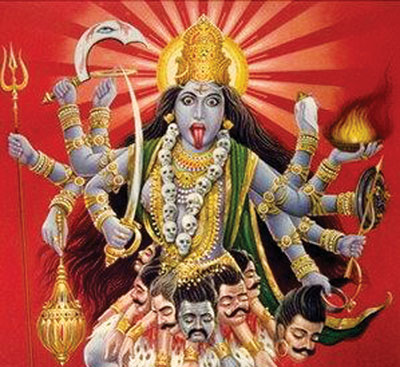 Goddess Kali’s flaming red tongue
In Bengal many unscrupulous vigilant temple priests make the tongue of Kali appear a flaming red, so that devotees flock to their temple and the hundi collections swell.

The secret is this experiment:
10 g of potassium chlorate
10 g of icing sugar
20 g of strontium nitrate

Take these on a piece of paper and gently mix by rotating the paper. Make a heap and add a few drops of concentrated sulphuric acid. The result is an intense bright red flare.

Playing with fire
Can anyone have fireproof hands? How do these miracle men play with balls of what looks like hot fire with their bare hands? This experiment will tell you.

Carbon disulfide mixed with Carbon tetrachloride in a 2:1 ratio gives a solution that can start a cold fire. Dip a ball of cotton in this solution and set it alight. The ball of fire can be placed on the hand and passed around, as it is hardly warm.

The scientific explanation for this experiment is that CO2 will not burn and CS2 burns without generating much heat; it has a low heat of combustion. Also, Carbon disulfide has very high vapour pressure and the vapour covers the ball. CCl2 is very heavy and has a relatively low vapour pressure and is non-combustible. Therefore it settles close to the palm and prevents your hand from burning. 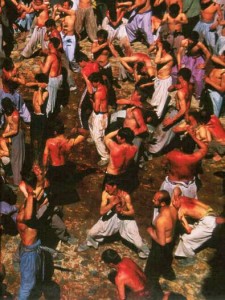 Whiplashes
We have all seen these fearsome men at religious festivals; ash smeared on the body and kumkum across the forehead, flogging themselves with an ugly looking rope whip, scarring their backs and drawing blood. What is the explanation? Does the man feel no pain? Here is the truth.

When ferric chloride is smeared on a whip and a paste of ammonium thiocynate is applied on a perspiring body, the touch of the whip on the body will draw what looks like blood. Ammonium thiocynate reacts with the sweat and turns blood red.

Walk on burning coal
Is it possible to walk on fire without burning your feet? Chemistry can make it possible.

Dissolve 0.5g of strontium nitrate in 50ml water. Mix it with 50 ml ethanol. Soak some pieces of coal in it. Now set the coal ablaze. Brilliant red flame will engulf the coal. The flame is self-extinguishing. 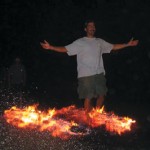 Scientists tell us that a thin layer of sweat prevents the feet from burning. This is the Leidenfrost effect or the sizzle effect. The intense heat vaporises the liquid to form a layer of steam or vapour protecting the feet.

There is no mystery. It is all in the magic of chemistry.

A dose of rational thinking
Encourage the children to try a dose of rational thinking the next time they come across some mumbo-jumbo. Ask them to go right ahead and unmask the fraud. A recent Hollywood film, “The Prestige”, would provide for interesting viewing and discussion. The film is about the intense rivalry between two magicians, and about how they go about constructing their ‘illusions’, and serves to expose not only the science underneath the ‘magic’ but also the public willingness to accept the illusions at face value.

Ignorance and gullibility has been the scourge of our society and prevented the country from progressing for centuries. Rationalism is a belief that all knowledge and truth consist in what is ascertainable by reason and thought. We need vigilant citizens who can observe, question and analyse things in order to promote an open, equal and just society. Arbitrary assumption of authority by some for personal profit has no place in such a society.

Intuitive thinking, religious and spiritual beliefs have their place in an individual’s life but when it comes to matters of society, scientific thinking and reason must rule.