I came to Eklavya on a one year Indicorps fellowship to build a library for the students of a local school. Though Eklavya was doing considerable in-school work with the students of Ankur Middle School (AMS), there were no after school initiatives until the library programme began. Eklavya’s association with AMS revealed that many of the school’s students had difficulty with the English language. This, a few teachers believed, was because children had no exposure to English at home. A majority of the school’s students were children of Class IV government officers, were first-generation learners, and almost all were first-generation English learners. By starting a library in such a context, Eklavya wished to demonstrate that strong command over language depends more on exposure to innovative practices than on one’s lineage. Moreover, this library would attempt to include parents in the initiative because they can enhance a child’s education beyond just reading and writing.

Though the library could have taken many different forms, our initial goal was to have older students, siblings, and parents run it. Attracting children to the library cum learning centre was relatively simple; however, securing volunteers proved to be quite a big obstacle. In the initial scheme, it was decided that the activities would be designed such that parents and children could do them together, and these activities would be led by volunteers. We wanted our volunteers to be students of classes 10-12 as they would have the academic skills required to teach younger students and as school children themselves, they would still be able to relate to some of the emotional and mental needs of the young students. However, there were a few disadvantages to this proposal. As adolescents they wouldn’t be able to command the same respect as adults and therefore would be less effective at classroom management. Second, their own schooling would always be their top priority. After weighing the pros and cons they seemed like the perfect demographic to facilitate the library programme. This would also help build their confi dence and leadership skills. These volunteers, ideally, had to belong to the community itself; they would be the older siblings or neighbours of students in AMS. To choose our ideal volunteers we visited homes and schools in the neighbourhood. Two training sessions were held during which these older students discussed the value of a library and were shown a few library activities. At the end, they were asked to select a day, time and area of interest from which they would develop their own sets of activities. 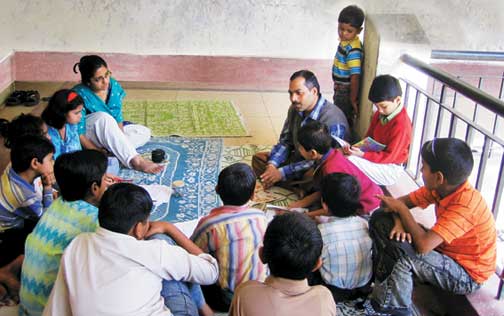 During the library’s first weeks, there were between 50 and 80 children coming daily; the response was overwhelming. Though the parents did not fully understand their role in the library, they seemed pleased to have an additional learning space available for their kids. However, of the 10 volunteers we found, seven backed out entirely; and the other three came late, left early, and were generally unreliable. When asked about their decision to leave, many cited lack of time as the main reason they were unable to commit to being a volunteer. Their own schooling (and exam schedules) required so much attention that they did not feel they could be responsible for an extracurricular programme as ambitious as this one.

In addition, the concept of a library as a “family learning centre” was not panning out. Finding activities that appealed to parents and children alike was difficult, but more importantly parents were resistant to the idea that they should do the activities with their child. The parents refused to accept that it was possible – or desirable – for them to learn together with their children. Many parents attached value only to learning centred on literacy. A few of the parents were themselves literate and the activities they could do with their children seemed comparatively unimportant. Moreover, the parents’ priority was the education of their children, and so creating an environment where parents and children learnt together was seen as superfluous and a waste of the parent’s time.

Instead of pushing the idea of a family learning centre on to the parents, based on this experience, Eklavya decided to drop the family-learning model, and focus on creating a sustainable library that complemented in-school academics.

Still hoping that there was some way to ground this effort in the community, Eklavya was unwilling to give up on finding local volunteers and instead pay people to staff the library. Wondering if distance was preventing the volunteers from fulfilling their commitments, Eklavya decided to shift locations and move the library closer to the target community. This basti had a considerable percentage of AMS students living in it. Maybe if the distance between home and library was reduced, community participation would increase. Not only was finding volunteers crucial to building a sense of community ownership, but it was also impossible to do constructive activities with groups of children at different levels without some outside help.

The decision to move the library from AMS to the basti was taken with the hope that being situated in the basti would make it easier to get volunteers. Additionally, working with the same population in two different settings provided the opportunity to examine the impact of space and location on the efficacy of a library. This time, we thought the library should be run by Eklavya staff for a few weeks. Once the community had the opportunity to see what was happening, perhaps interest would grow and community members would volunteer to participate in and sustain the library effort. Positioning the library near people’s homes encouraged the community to share the responsibility for the library instead of resting it on the shoulders of a single individual.

Even though the basti library was open during exam time, it did not experience the same drop in attendance that the school library did. Initially, when Eklavya staff would come into the neighbourhood, their presence would draw so much attention that groups of children would automatically flock towards the newcomer. In this way, 20 – 30 kids would be attracted to the mandir or library. However, after some time a routine was developed and kids would be ready and waiting in the mandir when people from Eklavya arrived.

Not only did the visibility of the library attract children, but it also interested parents. Being able to come and see what was actually taking place at the library created a level of support and interest from the community that was not seen in the school library.

Additionally, setting the library outside of school put the children at ease as they did not feel like they had to strictly follow “school rules.” Interestingly, the same set of children was actually better behaved in the basti library than at the school one.

The children also felt more comfortable with one another (which also may have had an impact on their behaviour). When we spoke to the kids, many said that their closest friends were their neighbours, not their schoolmates, and so having the opportunity to do educational activities with their friends was a novel experience. The same kids were more attentive and more willing to do group activities when in the basti. 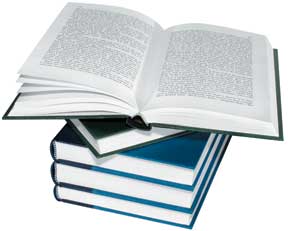 Finally, the impact of the social environment of the basti went beyond enabling a smoother implementation of educational activities. Many parents were generally strict about allowing children outside the house, but made an exception for the library because it was seen as an educational activity. The children would also use the last 15 to 20 minutes of the library session to play games with each other which offered them the previously nonexistent opportunity to interact socially. Thus, the library also helped build and strengthen bonds within the community.

Though the visibility of the library facilitated parental support, after two months, we still were unable to find people from within the community who were willing to take up substantial responsibility to run the library. Thus, while there were many interesting differences between locating a library in a school versus in a neighbourhood, the central difficulty of soliciting volunteers remained.

In addition, locating the library outside of the school made it impossible to restrict attendance to only school children. As a result, students from schools other than AMS would come to the library. Largely, this was a great thing. However, there were a few mischievous children who made it very difficult to run a smoothly operating library, and since they were not related to the school, it was difficult to maintain discipline.

My experiments with different library models have led me to make a few conclusions about the power of a community-based library.

First, a library is not only an academic institution but also a social one. While we certainly hope that the library will be a place where children learn a great deal, it also seeks to create a certain atmosphere where a child can feel free, comfortable and happy. To be able to interact confidently and joyfully with one’s peers is inherently valuable, and helps further academic goals. Ideally, a library should also draw in members of the local community to share their talent, knowledge, and skills with the children. Thus, the library can help create a social atmosphere that is fun and simultaneously promotes learning.

Second, libraries can have a much broader scope than simply lending books. Though one of the main goals of a library is to develop the reading habit, it is also necessary to view this process as comprehensive. Reading happens only when the child’s language skills are developed. In addition to all these things, there is nothing more important than cultivating a love of learning in the child, and that need not come only through books. In our library, therefore, we included everything from painting to storytelling to facilitate the child’s interest in learning and to help her express herself.

Third, a child learns best when all the senses are engaged and when taught through multiple approaches. Quite often, the activities suggested allow children to learn a topic in four or five different ways (for example, through drawing it, singing it, reading it, and acting it). Though it is not necessary to go through each of these methods every time, it is important to vary the methods used and senses employed to keep the children excited.

Fourth, libraries are useful. There are many institutions and communities (the school, the family) that exist in a child’s life to foster his growth and learning. The library exists as a complement to these institutions, but also uniquely offers a space where the child can do different types of activities in a less structured environment. These books and activities go beyond the limited purview of the textbook (often, the only book that a child has access to). Books and libraries create awareness about different cultures and ideas thereby opening a new world to the child.

For more information on the different libraries run by Eklavya, or the specifi cs of what activities and books to use in a library, feel free to contact Eklavya or the author.

The author is working with Eklavya, a learning centre in Bhopal. She can be reached at [email protected].

Libraries can be fun
Oasis for book lovers
‘Driving’ knowledge