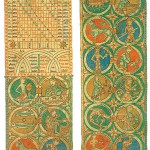 Early calendars
The measurement of time was one of man’s first obsessions, and out of this the calendar was born. The calendar takes its name from the Latin calendarium, an account book. It can thus be seen as an account book for time. The calendar as we know it today was created by the ancient Romans, who borrowed the concept from the Egyptians. The Egyptian calendar had 365 days, divided into twelve months of 30 days each, rounded off with an additional five days that belonged to none of the twelve months. The number of days in a month corresponded to the period the moon takes to complete a cycle of its four phases, approximately 29.5 days.

The Roman calendar, attributed to Julius Caesar and therefore known as the Julian calendar, used the Egyptian concept of the solar year, but assigned the extra five days at the end of the Egyptian calendar to five of the twelve months. The months were thus made up of either 30 or 31 days, except February, which had 28 days (and 29 days every fourth year). The Julian calendar, which was in use for more than 1500 years in the Western world, beginning around AD 8, was further refined by Pope Gregory XIII in 1582, when he corrected a slight mistake in the astronomical calculations it was based on. (This mistake led to almost a day being lost every hundred years). It is this Gregorian calendar that is followed in most parts of the world today.

The day, the week, the month, the year
The basic unit the calendar uses to represent time is the day. Different civilisations had different ways of measuring the day. For some the day began at dawn, for some, at sunset, and for still others, at noon. Following the Gregorian calendar, we now count days from midnight to midnight. The next calendar unit is, of course, the week. Interestingly, before we settled on a seven-day week, there was no agreement on how many days added up to a week. The number varied from four days in some parts of Africa to ten days in Egypt. The present seven-day week may have had two origins: (i) the phases of the moon, approximately seven days each phase in a four phase cycle, and (ii) the sacredness attached to the number seven by some of the ancient civilisations.

And finally, the year is the period taken by the earth to complete an orbit around the sun, about 365.24 days. The inadequacy of the lunar calendar, based on months of 29.5 days each, becomes apparent here, because the months add up to only 354.36 days, almost 11 days fewer than the solar year. That is why, beginning with the Egyptians, most civilisations switched over to a solar calendar at some point in their history. 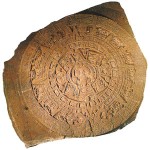 Naming the months
January gets its name from the Roman deity Janus, who guarded the doors to heaven. Janus was double-headed, with one face looking forward and theother, backward. Appropriately named, January looks back at the year gone by and looks forward at the new year. February comes from the Latin word februo, which means ‘to purify by sacrifice’. February was the month of purification for the ancient Romans. March is named after the Roman god of war, Mars. April derives from the Latin word aperire, which means ‘to open’. April is when spring sets in and nature ‘opens’, revealing new life. May gets its name from Maia, the Roman goddess of growth and increase. This is the time of the year when there seems to be growth everywhere (in the Mediterranean region), and fruits and flowers are in plenty. June gets its name from Juno, the chief Roman goddess. July was the month Julius Caesar was born in, and is therefore, not surprisingly, named after the great Roman statesman. August honours Augustus Caesar, Julius Caesar’s great-nephew, and the first Roman emperor, whose major triumphs were celebrated during the month. September, October, November and December derive their names from Latin words that identify them as the seventh, eighth, ninth and tenth months of the year, as the old Roman year began in March.

The days and their names
We know that Sunday is the sun’s day, Monday is the moon’s day, and Saturday is Saturn’s day. But where do Tuesday, Wednesday, Thursday and Friday get their names from? Not from Roman or Greek sources, as we might expect, but from the lesser known Norse, or ancient Scandinavian, mythology. Wednesday is named so in honour of Odin, or Woden, the supreme Norse deity. Friday is named after Frigg, or Freyja, Odin’s wife, and, of course, a goddess herself – the goddess of beauty and love. Odin’s sons, Thor, the god of thunder, and Tyr, or Tiu, the god of war, have lent their names to Thursday and Tuesday respectively.

Indigenous calendars
Although the Gregorian calendar is now widely used all over the world, some indigenous calendars have survived, and continue to be used even today. The Chinese calendar is in use in China and its neighbouring countries like Taiwan and Japan – along with the Gregorian calendar. The Chinese calendar consists of 12 months of alternately 29 and 30 days. A series of 12 animals represent the Chinese years – rat, ox, tiger, rabbit, dragon, snake, horse, goat, monkey, cock, dog and pig – and each animal year repeats itself every 12 years. The year 2007 is the year of the pig.

Like China, India has adopted the Gregorian calendar for all civil purposes. Its religious life, however, continues to revolve around the Hindu calendar, which has been in use since 1000 B.C. The months of this calendar are based on the phases of the moon, and, therefore, to keep the calendar in step with the solar year, an extra month is added to the calendar every 30 months.

The Islamic calendar is used throughout the Muslim world, except in Turkey. The calendar is based on the lunar year, each month beginning at the time of the new moon. The months alternately have 29 and 30 days, except the twelfth month, which is called the Dhu-al-Hijjah. The length of this month varies in a 30 year cycle, so that the calendar truly matches the phases of the moon. For 11 years of this cycle the Dhu-al-Hijjah has thirty days and for the other 19 years, it has twenty-nine.