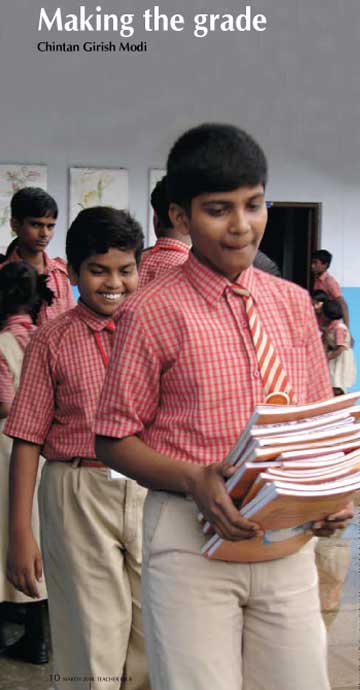 At the best of times, many of us as teachers agonize over passing judgment on a student’s work in the form of marks. In a history essay, what makes one student get 72 and another 76? What does the 4 mark difference signify in terms of quality? Can quality and understanding be measured in numerical terms? And what of letter grades? Are they any better? Can we define the qualitative – and quantitative – difference between an A and a B? These and many other questions may assail us as we make the move from marks to grades.

The Central Board of Secondary Education (CBSE)’s new mandate on continuous and comprehensive evaluation requiring schools to make a shift from marks to grades is meeting with a mixed response. While on the one hand, there is relief and even celebration, there’s uncertainty and skepticism on the other. We spoke with a few people to get a sense of how the change is being received.

“It is a child-friendly system. Most of us are welcoming the move, especially in the interests of children who are not able to cope. For them, it is a big burden off their head,” says Nandita Khanna, Head of Nalanda Public School, a CBSE school in Mumbai.

Nandita is alluding to the anxiety associated with examination results. Truly, the report card is an all-too-real monster that represents absolute terror for many a child. Seema Taneja, who has been counselling and consulting with CBSE schools for over 18 years now, says, “One finds parents comparing even over half a mark. One hears things like – Why has my child scored less? Why did he get only 18 on 20? Where did he lose out? There is so much pressure.”

Grades are being seen as a healthier alternative to marks, because grades do not equate the child’s capability with a number that might provide an incomplete picture of the child’s attainment levels. Seema says, “Grading offers a broader spectrum of where you approximately lie. I hope that with grading, parents will shift their attention from knowing about their children’s marks to learning about their aptitudes and interests.”

Manju Gupta, Principal of Pallavi Model School, a CBSE school in Hyderabad, says, “When we look around, we see that people who are interested in a variety of activities do better than those who are only academically inclined. So it is unfair to base a child’s future on a three-hour performance.”

She adds, “Assessment needs to be holistic. The new system gives weightage to art, craft, music, dance and yoga. There is a feel good factor for children who are not academically brilliant. We are very happy about this.”

The CBSE’s new grading scheme will take into account a child’s participation in extra-curricular activities, life skills, attitudes and values, along with his or her performance in academic subjects. How one can award grades for ‘honesty’, ‘respect towards teachers’, ‘emotional skills’, ‘creative thinking’, ‘ability to handle criticism’ is something worth mulling over.

Manju remarks, “These things are ambiguous and intangible, so grading is definitely a problem area when it comes to these. The teacher needs to be very observant and objective. That is why there is an emphasis on keeping anecdotal records.”

“A teacher has to be very unbiased. She has to be able to respect opinions that are different from her own. For instance, one needs to sensitize teachers as to what constitutes ‘respect’ and ‘disrespect’ towards teachers, otherwise they may pick on certain students,” says Preeti Sharma, who currently teaches English to IGCSE students at the Aditya Birla World Academy, Mumbai but has taught in CBSE schools for four years before her current job.

Seema feels that schools will have “teething problems” regarding this issue, but one must accept that “the idea of bringing in non-academic areas of development and growth into grading is essentially a good one.” She adds, “All teachers will have to sit together and give their inputs. This will take care of the subjective element involved in grading life skills, creativity, etc.”

Annamma Cherian, a teacher at Ordnance Clothing Factory School, a CBSE school in Chennai, observes, “The CBSE grading system has some safeguards. One single teacher cannot make decisions about a child based on her own discretion. She has to sit with a group of teachers, listen to what they have to say, and then the grade is given.”

Sure, one can produce a list of indicators that attempt to place controls on teachers’ subjectivity, or even ensure grading by multiple teachers. However, is it even desirable to grade all of these things in the first place, and artificially produce normative behaviour? Would such grading create another kind of pressure – the pressure to be seen as a well-behaved, law-abiding, goody-two-shoes student, for without it one’s grade sheet would make a sorry picture?

I am reminded of value education and moral science classes in school, where we wrote about values in daintily decorated books with pictures of Mother Teresa, Mahatma Gandhi et al. Teachers were content to see pages filled with quotable quotes, newspaper clippings, and high-sounding virtuous lines of prose or poetry. How can one ensure that grades reward values-in-practice, and not values-in-lip-service? This issue is of course not unique to grades but affects assessment standards and practice in general.

Preeti has a suggestion. “In the IGCSE board, when we do research work, we get our students started on the American Psychological Association (APA) system right from Grade 6. We tell our children that it is okay to pick information from the Internet, but they need to provide references for whatever they pick. They cannot pass off somebody else’s work as their own, because that would be plagiarism. That they are able to incorporate from other sources shows that they have understood well. This is one aspect of honesty that can be looked at.” 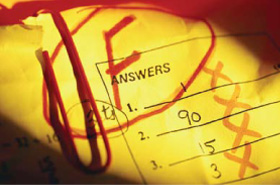 The switch from grades to marks necessitates a change in teachers’ attitudes as well as administrative procedures. And this change can be unsettling on several counts – the subjectivity involved in awarding a grade, the maintenance of elaborate records, working with colleagues to mutually decide upon a grade, giving up the idea of using a number/mark to sum up a child’s performance, and the sudden increase in workload. Any teacher training programmes that seek to initiate teachers into the new grading system must take these issues into consideration.

Preeti says, “Practically every CBSE school has 45 to 55 children per class. The strength of my IGCSE classes is 25, so I know each and every kid personally. With 55 kids and correction and administrative duties, it is going to be a mammoth task for CBSE school teachers to manage the increased workload unless CBSE is ready to introduce a co-teacher in each class.”

While one can make all possible attempts to ensure smooth sailing into a new system, as is the case with everything new that is introduced, there are bound to be doubts and questions. Even resentment. Among teachers, parents or even students.

Nandita says, “Children and parents are very concerned because the grading system is not followed across all boards. They are not sure how grades will work when they want to get admission to colleges that have cut-off percentages.”

Annamma says, “Children who take their studies seriously and do extremely well feel let down by the new system. The student scoring 91 and the student scoring 99 will both get an A plus. Even parents are worried that their kids might be at a disadvantage. Moreover, in Tamil Nadu, the state board students are given very high marks. There is a disparity between them and the CBSE students. With the introduction of the grading system, the situation will get worse. There is a lot of frustration among the students.”

These are legitimate concerns, and the sharing of them ought to be encouraged. It is only through open discussion that all stakeholders will get a fair chance to express where they are coming from, and to negotiate a new system in a healthy manner.

Manju, who has been at the receiving end of such concerns, shares her experience. “Our school has been doing a nine-point relative grading since the last four years, and we are now switching to the absolute grading under the CBSE’s directives. When we introduced the grading system four years ago, there were a lot of issues. It took a little while to convince parents, but we knew that they would eventually see light at the end of the tunnel.”

An important question that might get lost in all this discussion is: Will grading really do away with the hierarchies that we create among children on the basis of their performance? Seema says, “A hierarchy will be there. We can only work towards diffusing it. As you age, your mind becomes more capable with respect to handling stress in a constructive manner. You can’t do away with competition. You can just postpone it. Otherwise, how will the world work?”

The author is pursuing an M.Phil. in English Language Education. He runs People in Education, an online group connecting people and sharing resources. He can be reached at [email protected].