The COVID-19 pandemic has brought new life lessons, and I have been trying to do my best to stay attentive keep learning. There is a slowness about each day that feels unusual especially in a chaotic city like Mumbai, which is usually overstimulated and always on the run. With no teaching or speaking commitments lined up, I suddenly have a lot more time in which to educate myself.

I have been watching many shows on Netflix, and the one that has made the deepest impact is called Atypical. Created by Robia Rashid and produced in the United States, this web series revolves around the life of a teenager named Sam Gardner – played by Keir Gilchrist – who lives with Autism Spectrum Disorder (ASD). Three seasons have been released so far, and the fourth one will premiere in 2021.

What is autism? The official website of Action for Autism, a non-profit organization that pioneered the autism movement in South Asia, describes it as “a lifelong neurological condition, a developmental disorder that typically occurs in the first three years of life.” What does that mean? “Autism appears as differences in development in three main areas: communication (verbal and non-verbal), social interactions and imagination, which can be seen in repetitive and restricted play or leisure activities.”

Though India is a signatory to the United Nations Convention on the Rights of Persons with Disabilities and our Parliament has passed the Rights of Persons with Disabilities Act (2016), there is terribly little awareness among educators about the needs of students with disabilities. The job of working with them is outsourced to specialists. While I understand the need for specialized training, I also believe that all educators must make an effort to sensitize themselves.

In their review of Atypical for The American Journal of Psychiatry Residents’ Journal published in March 2020, Dr. Joo-Young Lee and Dr. Zhuoheng Deng at the University of Maryland’s Sheppard Pratt Psychiatry Residency Program write, “Unlike characters with ASD who are usually portrayed as having an interest in areas related to math or science, Sam enjoys his creative activity – illustration. This self-soothing ritual, repeatedly utilized to cope with his anxiety, evolves into a masterful skill.”(1)

While watching the show, I lost count of the number of things I loved about Sam’s story. He has a pet turtle called Edison. He knows almost everything there is to know about penguins. He cares a lot about his friends. He is a talented artist. He hates lying. He works at a store after school and likes to donate money to charitable causes. He advocates for his access needs and reasonable accommodations. He lives with his parents and a younger sister; they adore him. He has a best friend, a girlfriend and a therapist who have his back. 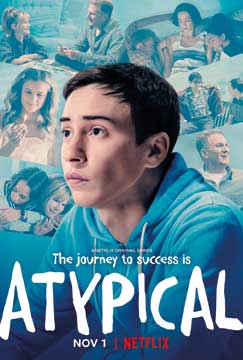 One of the most beautiful moments on this show is a conversation between Sam and his sister. When he learns that she is dating another girl from her school, he says, “You’d be like Sphen and Magic, the two male gentoo penguins at the Sea Life Sydney Aquarium. They courted each other and built a nest. When a negligent heterosexual penguin pair left their egg exposed to the elements, the aquarium staff gave it to Sphen and Magic. They have a baby now. Its name is Sphengic.”

Though I greatly appreciate this show, I wanted to check how people with ASD have responded to Atypical. Nathan Hughes, who is on the autism spectrum, and has a Master’s Degree in Education of Students with Moderate Disabilities in Grades 5-12, writes, “Even though people think that (Sam) doesn’t know when people are teasing him, he is painfully aware of the experience. He knows that others are laughing at him and they are asking questions in a provocative manner but his outward appearance does not show a response… I was struck by this description of bullying and ASD due to my own experiences with being teased as a child.”(2)

However, not all viewers from the autism community have reacted in the same way. That is understandable. The three common points of critique that I found in many reviews published online have to do with the fact that a neurotypical actor was cast in the role of a person with ASD, some of the scenes might elicit mocking laughter at the expense of the person with ASD, and that this show might give the impression that everyone with ASD behaves exactly like Sam. Reading these views has enriched my understanding of the show. I have a lot more to learn.

The author is a writer, educator and researcher. He loves to read poetry, travel to new places, and work on projects connected to peace education and queer rights. He can be reached at [email protected].