There’s been a lot of discussion recently on what schools should be teaching kids. Just this month, the United Kingdom announced the addition of cyber security to its curriculum in response to a lack of education in the field and the rising industry skills gap.

I believe US schools have been hesitant and even neglectful when it comes to how they discuss social media with students, and it’s time for this to change. Social media is a very real and ongoing aspect of our everyday lives: it no longer makes sense that, in 2014, several states still teach cursive writing when many students can text much faster on their smart devices. We need to be educating students on applicable skills for the world that they will interact with, and that means providing them with an understanding of how social media can affect their future. The gaping generational chasm between teachers who grew up before smartphones existed and students who were raised on them has resulted in a trial-and-error model of internet education and exploration, which could potentially wreak havoc on a student’s future. The Internet is written in pen, not pencil.Inflatable Water Game

The latest statistics show that 83 percent of teens in the US aged 14-18 are on a social network. More than 90 percent of them share their real names and use real photos of themselves, and around 20 percent share their cell phone numbers, according to Pew Research Center figures from 2013. What the statistics mean is that what children (and adults, for that matter) do on the Internet is available to pretty much anyone. But that’s just the reality we live in. There is a one-in-seven chance that anyone with intent and an Internet connection can find your child’s cell phone number right now.

Dennis Kelly, president of the United Educators of San Francisco, says that teachers are already overworked, and although social media is important, so are other things. “All students should learn to swim, but should it be the school’s responsibility to teach them swimming?” Kelly asks. Well, I say yes. If you’re a school in an area where your students are regularly going to be swimming, then you should feel it’s important that they know how. Australia, a country where over 75 per cent of the population lives near the ocean, has swimming as part of its curriculum. Likewise, as the numbers indicate, social media is already a large part of students’ lives and teachers should see this as an opportunity, not as a burden.

Some organizations have taken it upon themselves to introduce students to safe online habits. A group of volunteers from Fordham Law School recently began teaching seventh graders in New York about online privacy. When asked why it is important to educate students on best practices for online behavior, one of the classroom teachers, Nichole Gagnon, said, “Many teens believe that, because they are communicating through their own personal accounts, phones, and computers, it is private. While interacting with the law students, they soon realized that nothing that is public can be private at the same time.”

Along with personal privacy and safe Internet usage, recent hiring trends suggest teens should learn how to use social media for their jobs. A recent Indeed.com study of the site’s job listings shows a huge spike in companies looking for employees with specific social media skill sets. By analyzing the data from the title and description of job postings, Indeed.com found that jobs requesting Instagram skills were up 644 percent from 2012, and those searching for Twitter experience was up 44 percent. The term “social media” rose 28 per cent. 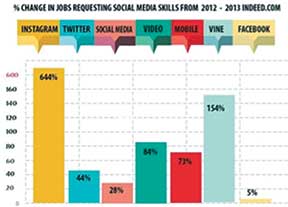 So how do we begin the process of teaching social media to students? Colleges, companies, and individuals will look at how these students act on social networks. There are several things schools can and should begin teaching students.

Online reputation
As students increasingly live out their lives online, we’re seeing major downsides to all that social media over-sharing, and they might have little control over how they appear on the Internet. If someone says something negative about another person, it can really damage that person’s future. At the same time, the person’s digital reputation also creates significant opportunities for students to put their best foot forward. Students should understand that what they put on the Internet, good and bad, is out there for the public.

Privacy
A lot of students have either completely crossed over or begun the process from parental influence to peer influence. Because this group uses experimentation to establish their adulthood, their social media interaction can exhibit inappropriate behaviour that seems uncharacteristic. It will be more common for them to have established several social-media communities, some with different user names. They are more aware of how to keep these personas private, but their behaviour on social media may get riskier, due to this false sense of security.

It’s important to teach students how to use privacy settings, the importance of location and tagging information, and how to maintain a professional public appearance online. They also need to be made aware of appropriate behaviour in private places such as locker rooms, bathrooms, hallways, and bedrooms. Remind them that behaviour in private places may not stay private and that anything they do could become a video or picture on someone else’s social media. Make the connection between their privacy habits and their ability to get into a good college, get an athletic scholarship, or even get the jobs they want after they graduate.

Benefits
While students might not understand it now, their classmates and teammates can become valuable connections down the road. Encourage students to connect with one another on social media and to stay connected even after they stop going to school with one another. If students know what they want to do after school, they can establish themselves in their respective fields through blogging and get involved in the right online communities. There are many other advantages to being Internet-savvy, like finding the cheapest used textbooks online for college.

Social media isn’t going anywhere, and every year we put this off is another year we are behind. It’s our job to teach students, so they don’t have to learn the hard way from their own mistakes. In an academic study done at the University of Oxford’s Internet Institute, researchers found young people who believe the Internet and digital technology benefit society are more likely to be resilient self-regulators online.

Erick Qualman, author of “Socialnomics” and “What Happens in Vegas Stays on YouTube,” said, We don’t have a choice on whether we do social media. The question is how well we do it.” I know it’s not traditional, but some things really are more useful than calculus.

The author is a social media manager at Northcutt.This article originally titled Why social media needs to be taught in Schools appeared first on VentureBeat http://venturebeat.com/2014/10/29/why-social-media-needs-to-be-taught-in-high-school/. It has been reprinted here with permission. VentureBeat is a leading technology publication and events business based in San Francisco.

The connected classroom
Why technology matters in education
Don’t get caught in the web!