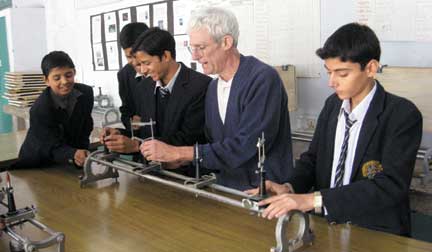 A classroom of their own like an alternate home, with a computer or laptop, printer, microwave oven, refrigerator, music system and sometimes, a couch and sofa, where they could set things the way they like: Indian teachers in the United States on a Fulbright exchange programme found they were in a completely new system where teachers as well as students had the freedom to choose, from how to teach the course to the clothes students wear to school. The experience was matched by the unique narratives of American teachers who took on Indian classrooms – equipped with the ubiquitous chalkboard and holding double the number of pupils they were used to.

Eight Indian and eight American teachers of math, science and English participated in the Fulbright Teachers Exchange Programme from August-December 2007. Administered by the United States Educational Foundation in India (USEFI), the programme has completed its third year, providing opportunities to secondary school teachers to learn from each other’s daily experiences and culture. “It is truly a case of stepping into someone else’s shoes. Each pair of teachers actually exchanges classrooms and teaching assignments for one semester,” says Jane E. Schukoske, USEFI’S executive director in New Delhi.

The Indian teachers were impressed with the facilities provided to teachers in American schools and found benefits in different techniques. In America, for instance, it is the students who move from class to class, to keep them from growing sleepy, and also to allow the teacher to keep materials and equipment in the classroom. “School teachers in the United States do not have to change their classroom after every period and the classrooms are provided with modern education gadgets like overhead projectors and multimedia technology. This ensures that the teacher does not get exhausted. They can also set the classroom in a way they feel comfortable with,” says Ranjini Gopalakrishnan, a math teacher from the Padma Sheshadri Bala Bhavan senior Secondary School in Chennai. He spent a semester at the San Lorenzo High School in the northern Californian town of San Lorenzo.

Sasi Raj, from Kendriya Vidyalaya at the Air Force Station in Pune, was also amazed at the use of modern technology he found at Gateway Regional High School in Huntington, Massachusetts. “In my U.S. school, each classroom had 10 laptops for students, who used them for writing essays and doing projects,” says Raj.

On their part, U.S. exchange teachers found that while most Indian students had a desire to learn, the huge classes made teaching more difficult. “An average class in an Indian school has about 50 students and the teacher is not able to give individual attention to the students, which they need and deserve,” says Timothy Daponte, a physics teacher from Bellaire High School in Houston, Texas, who taught at Kendriya Vidyalaya No. 3 in New Delhi.

Another American teacher, Eddie P. Grannis, describes the Indian chalk and board approach as slow. “In U.S. schools, we do not follow the lecture method. We have more projects. Teaching is more application oriented, whereas in India there is more focus on the syllabus and examinations. But both systems are now gravitating toward each other,” says Grannis, who is a teacher at the John O’Connell High School in San Francisco, California. He taught biology and environmental science at the Eklavya School in Ahmedabad, Gujarat. 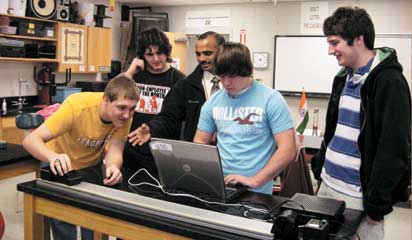 Rodney Kleber of Gateway Regional High school in Huntington, Massachusetts, echoes his sentiments. Assigned duties at the Kendriya Vidyalaya in Pune as an English exchange teacher, Kleber checked several hundred answer sheets during a short period. Back home, he would have an assistant, a volunteer, more time, or fewer tests to grade. “I checked these papers while listening to presentations during a conference,” he says.

Incidents like these left the American teachers with a sense of awe for their Indian colleagues as they neared the end of the semester. “I feel like I have not stopped [working] since I arrived. I admire how they are able to teach, do all the grading, conduct labs, write report cards, address the disturbance of students and on top of that cook and clean and raise their families,” says Ashanti Branch, a math teacher from San Lorenzo High School in San Lorenzo, California, who was an exchange teacher at the Padma Sheshadri Bala Bhavan Senior Secondary School in Chennai.

Erin Beth McGraw, who taught at a Kendriya Vidyalaya in Hyderabad, Andhra Pradesh, says, “Indian teachers are often given extra responsibilitiesike administrative work and organising of cultural shows apart from their teaching duties”. She feels this interferes with their professional work. Also unlike in the United States, where there are strict regulations on what work teachers can be given. “Indian teachers are not even paid for these extra jobs,” says McGraw, an English teacher at Rutland High School in Rutland, Vermont. 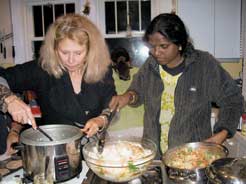 Overall, what did the teachers learn from the experience? “Teaching in the United States does not depend on emphasis on examinations and developing skills for retention of facts as much as on developing creativity, encouraging divergent thinking and analytical skills. These are some areas I would like to focus on in my classroom,” says Sheela Gabriel from Hindu Senior Secondary School in Chennai, who taught English at Portland High School in Portland, Maine. Gabriel enjoyed the candid views of the students. “Their independence, frankness and confidence was something that is missing in Indian students,” she says.

Branch, temporarily working in a Chennai school, says he liked the Indian system of the students being in one class together for the whole year. “Although they meet fewer other students, it helps to build trust and a community – like feeling within the classroom. I also like how students have a desire to learn. I like it when I ask for volunteers. I have to fight the students off because I have too many volunteers,” Branch says.

The teachers also got to experience life outside the classroom. Indian teacher Sheela Gabriel did a power-point presentation titled “India: Unity in Diversity” for the students and teachers of her school. “We had Indian music in the background and pakoras, papads and a variety of chutneys from an Indian restaurant were served on the occasion to give the whole event an Indian flavour.” She also demonstrated Indian cooking for an international cooking class at her exchange school.

Some Indian teachers experienced seeing their first snowfall. When Sasi Raj saw white particles falling from the sky, he thought they were from the nearby trees. Then some of his students told him, “Mr. Raj, they are snowflakes.” “I watched the beautiful snowflakes falling, painting the bare trees and the evergreen pine trees white, giving a spotless white look to nature,” he recalls.

The Indian teachers were also struck by the fund-raising activities of their American students. “Some students were spraying water on cars, while others washed them. They also sold cookies and food items to raise funds. It impressed me a lot,” says Raj. His American liaison teacher used to drive him to school and back home every day. During the half-hour drive, they exchanged ideas about the education system, their cultures, language and people. 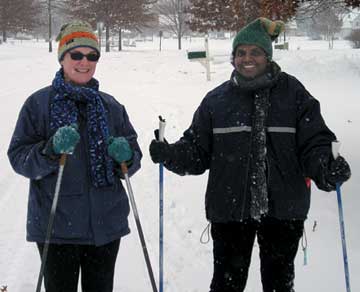 The American teachers had some amusing experiences. Daponte could not believe his eyes when he saw an elephant strolling down an arterial road in New Delhi. Despite the sultry August weather, he travelled by local bus to taste the “real” India. Diwali, though noisy and polluting, was a memorable experience for him; he and his son Matthew celebrated it with his host family.

“The Fulbright programme is so intensive an experience that I do not feel as if I am the same person who left India six months ago. I know I have to step into my Indian shoes once I am back on familiar ground but I wonder if those shoes will feel the same again,” says Gabriel. Meraj Fatima Parveen, from Kendriya Vidyalaya in Kanchan Bagh, Hyderabad, has fond memories of Vermont and its Green Mountains in the northeastern United States. “They are embedded in my memories. I have never seen such marvels of nature. I miss the ‘good morning, hello, how are you today, have a nice day,’ and so on which I got from almost every one every day,” she says.

“The exchange provides an important opportunity for secondary school teachers to learn about the host country and to share that learning with their students, schools and communities at home,” says Schukoske. So far, 38 teachers have participated in the programme. “USEFI is very pleased with the positive impact of the teacher exchange and plans to continue the programme with about eight exhanges per year for the near future,” she says. 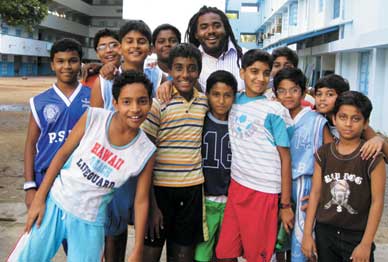 This article has been reprinted with permission from Span January/February 2008, Volume XLIX Number 1.

For more information on the Fulbright Teacher Exchange Programme, see
http://www.fulbright-india.org/scripts/ForU.SNationalsTeachersTeachersExchange.aspx
Teacher’s Guide to International Collaboration on the Internet
http://www.ed.gov/teachers/how/tech/international/index/html