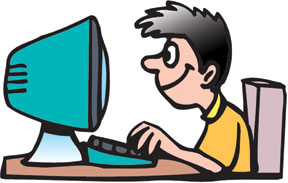 “Yes we did. Yes we will.” That’s what the email I received from my ten-year old nephew a few days ago said. I wasn’t sure what they did and what they would, since I didn’t recall sending him anything in the recent past, but as I scrolled down the screen, I saw the original email, purportedly from me, to which he had responded. I had been asking about whether he and his sister had enjoyed the 16-raga class they had attended and whether they’d had fun with the friends they had seen that day. Now, for the life of me, I couldn’t recall having sent this email. I was very positive I had never heard of a 16-raga class and I certainly knew nothing of what they’d been up to in the past year, since I had spoken to him perhaps all of once during that time. But then I realised that these friends’ names that were mentioned in that email seemed familiar, and his sister (my niece that is) was mentioned by name too. Now, the possibility that this was from some nefarious stranger, posing as me, whose intention it was to lure my nephew into some sort of web trap was beginning to look more remote. It was unlikely that a stranger would not only have my nephew’s email address, but also know who his sister was and the names of a couple of their friends.

Of course, anything was possible. It could be someone who knew them vaguely, or who was adept at cyber crime and had intercepted other email bound for my nephew or from him that mentioned these other details.

And then I remembered the fact that I had spent a couple of months baby-sitting the two three years ago, perhaps I had sent that email soon after returning from that trip. So I replied that either I had never sent this or had sent it many years ago and copied his parents on it as well, just for safety’s sake.

I promptly received a reply from nephew saying that yes, it was from three years ago – it was just that he had forgotten to send a reply then. I started giggling. At his age, three years probably seemed more like ten. He must have dug really deep to pull that memory out – with so much information and communication floating around, the same sorts of things afflict the young and the old these days, it seems. I suddenly started thinking about all the things that could happen if people started delaying their replies by a few years, intentionally or otherwise.

“Okay” – in response to “Can you sell the shares you bought on my behalf?”– making a pauper or a millionaire out of the person doing the asking or perhaps of the person being asked, depending on the type of person each was.

“How about tomorrow?” in response to “When can you spare some time to help me review these application materials for entry into the program of my dreams at Harvard?” Hopefully, the person who asked this no longer needed this sort of input.

“Yes, I will” – perhaps in response to “Will you marry me?” And maybe the acceptance would still be relevant, because the person who had proposed was now free again (of other marriages, girl/boy friends, etc.)

“Let me think about it” in response to “Will you donate your kidney to me?” If this had come sooner, perhaps the poor soul, who may still have been alive, could have let them know that they were hanging on for dear life.

The author is a software professional. She can be reached at sudharang@gmail.com.