I belong to a generation whose parents didn’t know any better. When they found that books kept me quiet, they gratefully let me read anything I could lay my hands on. Nobody ever told me what I should or should not read. Thangod, as Arundhati Roy would say.

I used to pick out words from the paper, and I remember particularly an ad for HECH O AAR EL EYE SEE KAY YES! Horlicks! It had a drawing of a boy being woken up for school by a frowning father, with his smiling mother holding out a steaming cup. I made up a rhyme about it (Ezhundhuko da, mani aachu!), and remember singing it ad nauseam around the house.

Apart from my schoolbooks there was not much ‘kidstuff’ for me to read, but I do remember an Enid Blytonish book ‘Lone Pine Five’, with a band of intrepid children whose elders seemed to be looking the other way as they set off to follow a tribe of gypsies and explore an underground river. My elders didn’t allow me to leave the compound gate. Then there was ‘Robinson Crusoe’ in which Man Friday seemed unaccountably stupid and his ‘Mas’r’ infuriatingly superior. And ‘Oliver Twist’, which inspired me to direct my brother and sister in skits of two of the crucial scenes, one being ‘Please, Sir, can I have some more?’ and the other the final melodramatic reunion. But the scene when the burglar Bill Sykes strangles his girlfriend Nancy, I kept to myself, wallowing in daydreams about it, and wondering how she could say she loved him when he was doing something so horrible to her.

‘The Coral Island’ was gifted to me by a book-loving uncle, and I read it not noticing that there were no girls in it… Feminist hypersensitivity would have spoilt it for me. When I was grown-up and read William Golding’s ‘Lord of the Flies’, a chillingly demonised version of the same tale, I thought “Thangod I didn’t read it back then! I’d have had nightmares and wet the bed!” 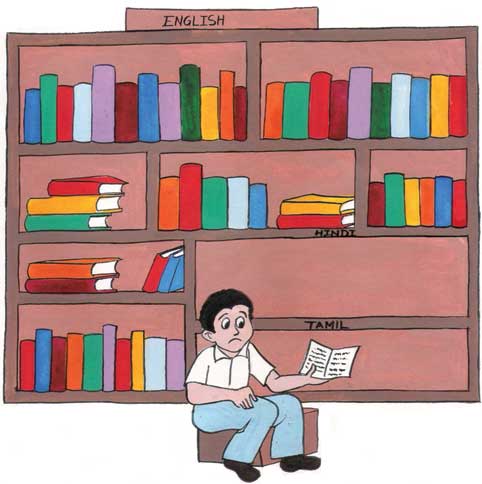 Cheaply-priced Russian books started to come in, and I was given a book of quirkily-illustrated fairy tales, with a story about a fair-haired boy named Ivan who invents a salt-making machine. But he loses it in a shipwreck, and it is still lying at the bottom of the ocean, making the water salty. Watching the water churning outwards from the stern of a ship, some months later, I had a vision of the contraption full fathoms deep – and stopped the thought, midway, and resolutely dismissed it as a fairytale. With that, I gave childhood notice.

The family spent some years in a house in America, with a room full of miscellaneous books. I found that there was no rule that said you had to read a book from the beginning to the end but could start anywhere I wished and read back and forth, and over and over, and skip the boring bits. ‘Tom Sawyer’ was there, and ‘A Connecticut Yankee in King Arthur’s Court’, but I rapidly moved on to Readers’ Digest Condensed Books. They were all bestsellers in the fifties, but since the authors’ names didn’t interest me then, I don’t remember them now. One book mysteriously entitled ‘Not as a Stranger’ was about a medical student (probably a White AngloSaxon Protestant, as I deduced much later) romancing a poor Swedish immigrant nurse and getting her to pay his way through med school while he fooled around with a glamorous girl student. In those days even the most daring books didn’t deal very explicitly with sex, so there were whole passages I didn’t understand and had to skip. But I got the main message: the medical student was SELFISH. Another book was called ‘My Brother’s Keeper’, in which two antagonistic brothers end up spending their crabby old age together in different wings of a house strewn with meaningless bric-a-brac. They seal themselves off from each other with towering walls of piled up newspapers, and die separated by them! It gave me some curious dreams, this book with the stern Biblical title, and to this day when old newspapers accumulate in my house, I am uncomfortable, remembering those unloving and unloveable old men on opposite sides of a newspaper wall.

Then there was the unreadable ‘From Here to Eternity’ by Hemingway, who seemed to me to be saying nothing very much. My initial prejudice was, I am sorry to say, confirmed by later attempts to read him, except for ‘The Old Man and the Sea’. Sea adventures I liked, Thor Heyerdahl’s ‘Kontiki’ interested me mainly because it was a true life adventure about a journey across the Pacific on a raft. Heyerdahl was trying to prove that the Incas colonised the Pacific islands.

At the same time that I was dipping into these grownup books, I discovered the neighborhood public library. For me the most wonderful thing about America, and something which Indians never seem to bring back with them as something to fight for, is the idea of the free public library. Every neighborhood has one, and it is stocked with books for all ages, from the classics to the latest publications, as well as audio and video tapes. We think of America as a country professing free enterprise and private ownership as the only way to get things done, but that nation has always kept the public schools and libraries in the public realm, and for very good reason. It is local governments which maintain these libraries, and anybody, even a resident foreigner, can take out dozens of books without paying a cent – but must pay stiff fines if he or she loses or damages a book.

I was delighted to discover ‘Swami and Friends’ back then, in that American public library. Although I enjoyed books about other kinds of people and places, I yearned for books that would explain me to myself, that would put into English words my very Indian family ambience and culture, without cutting me off from the wider world into which I sensed that I had been brought, through English. Swami clicked magnificently in that sense.

Yet I couldn’t sit around waiting for other books of that type, I had to read whatever was available. I probably filtered out most of what was indigestible. While my father was pleased that I liked to read, my fifth-standard educated mother who had never been taught English began to complain that I was reading too much. She thought books were making me impractical, and she was right, of course. But she didn’t, or couldn’t, do anything about it. Sensing that I was having an overdose of Western books, she began to read me Kalki’s stories, Bharati’s poems, and the epics and legends serialised in Tamil magazines like Ananda Vikatan and Kalki. She had a passion for Hindustani, and wanted me to speak the language and to read it. But where were the children’s books in Tamil and Hindi? Even later when I wanted books for my children, I could never find any Tamil or Hindi books that were amusing and stimulating without being preachy. I still can’t get my hands on really good kidstuff in Indian languages for my grandchildren.

Most people who like to read a lot have learned to read more or less by themselves, from books that have had little or nothing to do with schoolwork. It seems to me that it is roughly between five and fifteen that we acquire most of our language skills. It is during that same period of late childhood-early adolescence that children easily pick up languages. To stimulate them and expose them to various kinds of reading experience is the challenge. For, it is also the stage when children either become interested in books, or get turned off entirely. This happened to several people I know, and it had nothing to do with IQ or any of that stuff, but just with what books were available to them, and how they were introduced to the reading habit.

Making plenty of books available, without pushing them, seems to be helpful, as also a reasonable amount of freedom to pick and choose. An interesting-looking book with ‘difficult’ words isn’t likely to be put down by a child on that account alone, except reluctantly. But the most interesting of books, even an easy-to-read one, thrust on a child by a too-eager parent hovering over his/her shoulder with an insistent “Read it! Read it!” is likely to meet with a sticky end. Coaxed and bamboozled thus, a four-year-old I knew once flung his Noddy book into the toilet.

First appeared in Indian Review of Books. Reprinted in The Hindu (Youth Page) on Aug 3, 2002. Reprinted here by permission of the author.
Are you an educator of children, or a parent who has tried to get her/his children to read? Write and tell us about your experience!

The author is a poet, translator and journalist. She can be reached at [email protected].