There’s a narrow oblong view to the outside world; a grey gravel street on which I can see the heavy wheels of trucks, the flighty, light tyres of mopeds and scooters, the earnest efficient bumpers and treads of a hundred different cars. All noisily on their way to a busy somewhere – errands to run, people to meet, deals to make, things to buy and talk about. In general, life. 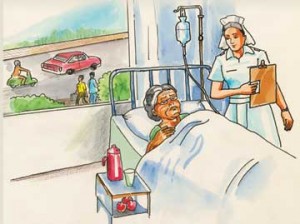 The white-soled nurse props up the blood-pressure gauge on my bed and wraps the worn canvas strip around my flaccid arm. I can see a flicker of sympathy in her eyes, leftovers from some distant past when she wanted to make a difference. Now it’s just a job. Too many patients with incurable conditions, one of them being old age. Too many who want to live but cannot; too many who want to die but are not allowed to.

The young doctor talks to her colleagues happily about her upcoming presentation at the National Nephrology Conference. She’s excited, it’s her first major presentation. I know from her conversation that the highlight of her paper is a series of cases where kidney failure was accompanied by a rare blood disorder. Diagnosis is the first step to cure, she says, and establishing such linkages may lead to early diagnosis.

The patient next door to me is a young mother whose 10-year-old son has made one brief appearance at her bedside in the past two days. You can tell, from the hushed tones and averted glances, that medical science has decreed her terminal. In the ICU, loved ones are interruptions to the sanitized routine. Her mother was asked to leave the ward because she wore her grief on her arm. The son is not allowed more than a glimpse because he is to be protected from his mother’s mortality.

The monitor beeps loudly behind me. I have moved too fast for its sensitive electrodes and the nurse comes rushing in, summoned by its electronic call. This has happened before, many times, and now she tut-tuts impatiently and simply disconnects the alarm. No room or time for another ‘wolf’ call now.

I turn my eye to the oh-so-slow drip lines, one dark red, compacted blood from some generous donor’s veins. The other is clear energy-giving fluid, glucose, they say, but I suspect there’s some other stuff in it as well.

They are wheeling the dialysis machine out of my neighbour’s cabin. Soon she will be moved to a room where her son can come and hold her hand and hug her, where her mother can laugh and cry with her while she waits to die, slowly, wanting ever so much to live to see her son turn into a moody teenager and bring home a girl, maybe.

The doors swish open and a stretcher is dragged in. The six cubicles are always occupied, people fighting to live, fighting to die. Yama has a strange way of choosing his new entrants. The old woman across the hall from calls out to Arunachala, Shiva embodied as flame-turned-mountain, to take her unto him. But life has reclaimed her, it appears. Before long she is taken out on the stretcher to a special room upstairs for a few days before going home, to being again the maintenance of a daily routine.

As for me, I know, and they know, the nurses and ayahs, that this attack too shall pass. The 72-hour critical period is over and I am on the way to recovery. Soon I too shall travel through those double doors and then, later, down the lift to the parking lot. And someone else, pondering on questions of life and death, will watch the brand new tyres of my son’s luxury car hurry down the road to a seemingly busy routine.