Being a teacher for the higher secondary classes, I have always wondered how much proximity is too much with the students. This is a question that looms large over the minds of many teachers at some point or other. I have experienced that making personal connections with students through humour, kindness and affability goes a long way in creating a rapport with them, which in turn translates into a thriving classroom environment. Such an environment can be very productive, rewarding and also constructive. However, there has to be a line that should never be crossed. A teacher has to clearly understand that building a “too close relationship” with the student can be detrimental to both the student’s future and the teacher’s effectiveness. There is always the danger of disrespect lurking over your classroom dynamics when things are taken too far. My personal experiences have made me come to the following conclusions:

1. Disrespect and audacity
The moment students realize that the teacher is too cool, they stop taking your words seriously. They fail to differentiate between school and home. They become too comfortable with you to show the kind of respect a teacher should command. Once you lose your respect or position in their eyes, it is hard to get back to the original position from where you started your journey. Children need an authority figure who can mould their behaviour, show the right path and not someone who acts cool or tries to be their buddy.

2. No accountability
It is also possible that students may not finish the work/assignments given to them on time. They start giving excuses and they may not even feel that they are doing something wrong. The concept of accountability ceases to exist in their mind. When questioned for non-conformity, they may challenge you and you may also have to face frequent showdowns with them, which can turn ugly. 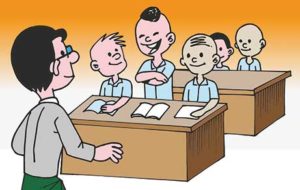 3. Poor classroom management
When things go out of control with a particular child or a bunch of children, it is bound to affect your entire classroom environment. Gradually, other students may also take you for granted.

Indiscipline, unruliness and non-conformity may become the way to go for everybody in the class. It may even to go to such an extent that students will begin to have an upper hand over everything you say or do rather than you having a control over them.

4. Poor performance
Every child has his or her own style of learning. Some may grasp things faster; some may be slow and some may learn after repeating the same things several times. There might also be a few children who may not want to learn at all because they feel that the climate is too good to sit indoors and they would like to meander and not do anything meaningful or productive. They may start viewing school as not a place for learning but as a source of entertainment. This may result in poor performance.

Conclusion
The teacher-student relationship is something that is very important and sacred. It should be protected and nurtured. The student as well as the teacher should make every possible attempt to make the relationship sacrosanct and inviolable. A child spends one-third of his/her productive time in the school. Therefore, a teacher should use her power and authority to influence and shape a child’s future in a positive way. Remember as the saying goes, “A teacher can be friendly but not friends with a student”.

The author, committed to creating productive learning environment in schools, is an accounts teacher at Deccan International School, Bangalore. She can be reached at [email protected].