What do you think of the recent emphasis on leadership training in schools? It goes beyond nominating a class representative or electing a student council president. There seems to be a wider interest in identifying qualities associated with leadership – such as teamwork, communication skills, problem solving, empathy – and honing them through workshops and conferences. Is this leadership training meant to prepare students for the corporate workplace, or is it supposed to help them discover their potential and excel in any field of their choice?

Leadership means different things to different people. Here are some preliminary questions to think about as you create your own definition. Is leadership an ability or a position of power? What is the leader’s primary role – to inspire, to command a following, or to get the job done? Can one be called a leader if one does not work in a hierarchical system? What are some leadership styles that you consider effective? How do circumstances and choices play a role in making someone a leader?

These questions can be explored in schools using Little Leaders, a series of four children’s books jointly written by Arthy Muthanna Singh and Mamta Nainy. It was published by Red Panda, an imprint of Westland Publications, in 2020. In an email interview, Singh and Nainy said, “A good leader is someone who feels deeply and acts decisively, who is gentle yet steely, who lets their life speak and dares to listen, someone who might not bequeath all the answers but offers open questions that people are pushed to ponder on.”

Each of the four books is dedicated to one illustrious personality. These are astronaut Sunita Williams, child rights activist Malala Yousafzai, cosmologist Stephen Hawking and cricketer Mithali Raj. These are famous people, so a lot of biographical information about them is already available in the public domain. What Singh and Nainy offer is a chance to see them as people who were once children filled with curiosity and wonder before they pursued their passion, accomplished something big and came into the public spotlight. 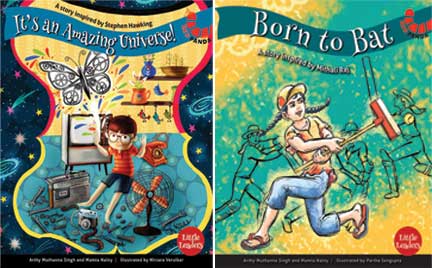 Singh and Nainy added, “What we do with our role models is to pedestalize them. We eulogize them and make demigods out of them. The one thing that we were very clear right from the word go was that these stories would not be so much about what these leaders have achieved but about the fact that all these people had their moments of doubts and fears and insecurities but they didn’t let these stop them.” This approach is refreshing. It makes the protagonists appear relatable, not prodigious or extraordinary.

A substantial part of Suni Goes to Space, the book about Sunita Williams, celebrates her inquisitive spirit as a child. When she hears a radio announcement about Neil Armstrong setting foot on the moon, questions come rushing to her mind. For example: How did he get there? Did he jump on to a hot air balloon? Did he build a ladder to the moon? Or maybe he rode on the back of a bird to get there? In the book, her mother says, “A special bird called a space shuttle took him there. Astronauts go to space to study it. That’s how we learn about planets and stars.” She wants to be an astronaut, so her mother assures her that she can be whatever she wants to be.

The book that revolves around the life of Malala Yousafzai is called Braving the Bullet. It paints an evocative picture of where she grew up – the Swat valley in Pakistan. We are told that, in her childhood, “she would tiptoe to the window and listen to the valley – the big mountains, the bleating of the goats, the flurry of the chickens, the vast fields and everything that lay beyond.” When she realized that the world outside was much bigger, she forged a relationship with it through books, and her optimism motivated her to beat all the odds stacked against her.

The courage to be undefeated by adversity is also highlighted in the book It’s an Amazing Universe, which tells the story of Stephen Hawking. Apparently, he often felt out of place during his years at school. He did not have a distinguished reputation for academics, sports, dramatics or any other activities but he wanted to solve the hidden mysteries of the universe. Instead of explaining, his father encouraged him to figure things out on his own. We are told that he “pulled things apart and put them back together to make new stuff…creating his own little universe.” 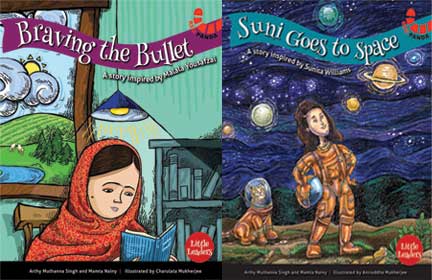 Born to Bat, the book on Mithali Raj, constructs the image of a carefree early childhood before she found her calling and started devoting her time and energy to it. Apparently, what she loved more than anything else was to sleep. The book reveals, “Every morning, when her mother, Leela, woke her up, Mithali would drag herself out of bed. Only to flop down on the couch. Or she’d go to the bathroom and doze off, sitting on the pot. Mithali would even sleep standing up! For she simply loved her world of dreams.” This changed when she fell in love with cricket.

Every book has a different illustrator – Aniruddha Mukherjee (Suni Goes to Space), Charulata Mukherjee (Braving the Bullet), Nirzara Verulkar (It’s an Amazing Universe!) and Partha Sengupta (Born to Bat). For Sunita Williams, the authors wanted a “dreamy and dramatic” style; for Malala Yousafzai, they sought a “graphic, bold and feisty” look. For Mithali Raj, they chose “a combination of colour and black-and-white in a way that’s non-constricting”; for Stephen Hawking, they settled on “a style that’s vibrant and deeply alive, one that captures the strange tapestry of his trepidations and ambitions.”

The visual language created to match the personality of each protagonist is a special treat. It enhances the aesthetic appeal of these books, and also adds a rich layer of contextual meaning. It shows that Singh and Nainy are more interested in the inner lives of their protagonists rather than depicting them as larger-than-life characters. As the authors remarked over email, these are “people who have risen above the odds, who’ve spoken out and taken a stand, who’ve learnt to channel fear and insecurity into action and have made a change in their own big and small ways.”